Mother Teresa as she was known to the world was born as Agnes Gonxha Bojaxihu on 26th of August 1910 in Yugoslavia, to a middle class Albanian family.

Her father was a businessman and was also a member of the community council.

Unfortunately he passed away when Agnes was only 9 years old. Her mother, Drana had to take care of Agnes all alone along with her two siblings Aga and Lazar.

Her mother had to sew in order to feed her children but she was also very considerate about her kids’ religious education.

Agnes along with her two other siblings were taught to treat the poor kindly. They were told to help anyone who came to their door asking for help.

They were taught to treat them with respect. During holidays, the family would make visits to pilgrimages to Letnice.

Agnes would sing in the choir and also played the mandolin. When Agnes was just 18, she made a vow to the church and would do numerous charitable works in Letnice.

In 1928, Agnes decided to work in India where several other nuns were already working under the Sisters of our Lady Loreto that was active in India at that point.

Agnes made the decision of joining the Sisters of our Lady Loreto and so she travelled to Dublin where the headquarters of Loreto was situated.

Over there she learnt how to speak English and officially began her religious journey.

She was renamed as Teresa

Sister Teresa De Lisieux, a 19th century nun who was doing charitable work and had made good remarks through her works. It was after her that Agnes renamed herself “Mother Teresa”.

Teresa arrived in Calcutta in 1929 and was working at the foot of the Himalayas and even in Darjeeling.

On 23 of May, 1929 Teresa was accepted as a novice and since then for the next 17 years she worked as a teacher in St. Mary’s High School in Calcutta.

It was an elite school for the privileged. She went back to Darjeeling in 1946 as she fell ill.

“It was in the train I heard the call to give up all and follow Him to the slums to serve Him among the poorest of the poor”, Mother Teresa recalled.

And so she was given the permission by the then Pope Pius XII. She left her previous order and began to teach the children in the slums of Calcutta.

Mother Teresa shared an incident that changed the course of the lives of many impoverished people.

In 1952, she found a woman who was pestered by the rats; she was half eaten up by the rodents in a street just in front of a hospital. Mother Teresa remained with the woman until she died.

Mother Teresa made an appeal to the higher authorities to provide her with a building where the poor and underprivileged could die in peace and with dignity. She was providing with a hostel.

Mother Teresa formed her very own missionary; the Missionary of Charity where each soul was devoted to bring the needful people and people who are dying in the streets. They were brought to the “Kalighat Home of Dying.”

Her work across the World 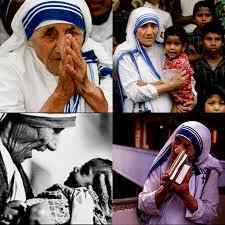 She served the hungry people in Ethiopia, the poverty stricken people in the towns of South Africa, people who suffered because of the radiation in Chernobyl.

In 1965, Pope Paul VI gave her the permission to extend her service by expanding her congregation to different parts of the world.

And so, Missionaries of Charity was extended to countries like East Africa, South America, North Europe and Venezuela. It has become like an international family.

She was there with and for anyone who needed her.

Her charity was spread across the world. It extended from Calcutta to New York.

Mother Teresa’s Missionaries only consisted of 13 members at the beginning but by 1997, around 4000 members were a part of the institution and it had been established and functions in around 123 countries.

In the beginning of 1960, she had already sent her sisters in the other parts of India. Her houses were also opened in communist countries which also included Soviet Union, Cuba and Albania.

Mother Teresa was no doubt was known across the world for her charitable work and unconditional service towards the poor. She was awarded with numerous awards.

India, in 1962, awarded her with Padmashree award and she was also given Bharat Ratna in the year 1980.

In 1979, she was given the Pope John XXIII Peace prize for her voluminous work.

In the year 1962, she was given Ramon Magsaysay Award for Peace and International Understanding for her tireless works in South East Asia.

Countries like USA, UK and Germany also honored her.

She was renowned worldwide after she got the Noble Peace Prize in 1979 for her work. Mother Teresa accepted the Noble peace Prize wearing a white saree that is identified with her work and with the poor.

Teresa accepted the prize with the words, “I choose the poverty of the people of our people. But I am grateful to receive it in the name of the hungry, the naked, and the homeless, of the crippled, of the blind, of the lepers, of all those people who feel unwanted, unloved, uncared for throughout society, people that have become a burden to the society and are shunned by everyone.”

Despite her continuous efforts to help the poor, to preserve humanity and tireless service to the children she received criticism from many.

Germaine Greer, a feminist of the prevailing period bashed Teresa for her anti-abortion sentence and on her thoughts regarding contraceptive.

She was also accused of not providing the ill with proper medications despite receiving an enormous amount of donation.

She was even judged for placing flowers on the gravestone of Albanian dictator Enver Hoxha. But Mother Teresa was not moved or shattered by these comments rather she continued her selfless work wearing a smile on her face.

While Mother Teresa Was in Rome visiting Pope John Paul II in 1983, she received her first heart attack and second in 1989.

At the beginning of September 1996, her health started to deteriorate and she was admitted to the Woodlands Nursing home in Calcutta where she was diagnosed with malaria as well as lung complications. On September 5, 1997 she left this world to her home above.

In October 19th 2003, Mother Teresa, otherwise now known as “Saint of the Gutters” was blessed by Pope John Paul II in front of thousands of her followers.

It’s a process of becoming saint. This process of beatification involves documenting the holy acts by the Vatican.

Two miracles were recorded which had healing of a lady suffering from abdominal tumor. The lady was found to be cured when came in contact with a locket which had a picture of Teresa.

Her second miracle consisted of a healing a man from Brazil suffering from brain tumor.

Many pilgrims, tourist’s members from different regions and religions and Catholics gathered in St. Peter’s Square as the ceremony went by.

19 years after, Mother Teresa’s death she was made a saint on September 4th 2016 in Saint Peter’s Square by Pope Francis. She is also called “Blessed Teresa of Calcutta.”

“By blood, I am Albanian. By citizenship, an Indian. By faith, I am a Catholic nun. As to my calling, I belong to the world. As to my heart, I belong entirely to the Heart of Jesus. ”

A small and humble build Teresa but a determination so strong that the entire world religious or non- religious considered her as a true saint for the “poorest of the poor.”