Essay on Mother Teresa (Nun, Saint) for Children and Students 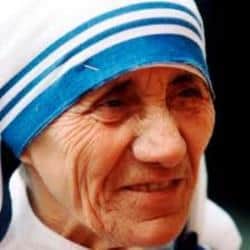 Mother Teresa was more an Indian than a citizen of the country of her actual birth. She was a great social worker of India. She was born on 26th August, 1910 in Yugoslavia. Her childhood name was Agnes Bojaxhiu.

After completing her school, she became a nun and came to India. She started teaching in the beginning and then devoted herself in the service of the poor. Seeing the suffering poor in Kolkata, Mother Teresa decided to spend her whole life to bring them relief.

She began to wear a white, cotton saree with a blue border. She started visiting the slums to feed and clothe the needy. In 1950, the Missionaries of Charity was established in Kolkata. Later, homes like Nirmal shishu Bhawan, Nirmal Hriday, and many others were also started to take care of the poor.

Mother Teresa was given several awards for her work. The Nobile Prize, the Bharat Ratna, the Padma Shri and the Nehru Award are some of them. Her work had spread all over the world.

Her great work was recognized and appreciated all over the world. Mother Teresa got frequent invitations to visit other countries and start her mission there as well.

She had acquired all this with the help of love, faith and prayers. She died at the age of 87, on 5th September, 1997 in Kolkata. Her death was bemoaned by all, irrespective of their faith, status or nationality.