Which is the most polluted river in India?

Yamuna is the most polluted river in India. The river Yamuna flows as a tributary of the river Ganga. It is one of the most sacred rivers of Hindus. 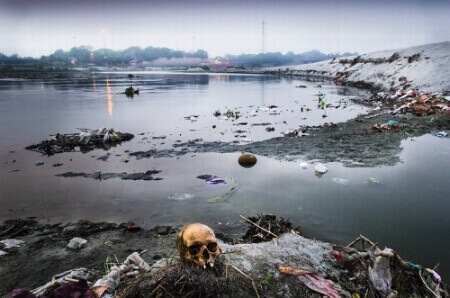 The river finds its origin in the Uttaranchal state at the picturesque Yamunotri, the birth place of river Yamuna. The river covers a very long span of 1,637 kilo meters all along from Uttaranchal to Allahabad, where it meets the Ganga River.

Thus, the meeting point of Ganga and Yamuna at Allahabad is famous among Hindus and it’s of high religious importance too.

Importance of river Yamuna through its long journey

River Yamuna creates fertile plains throughout its journey. The river serves as the lifeline of thousands of people living in the Yamuna basins and the water is an important source of irrigation for agricultural purposes.

It is found that, the Yamuna River does not flow at a constant rate throughout the year. There are months when there is a good flow.

There are months when the flow of the river reduces and sometimes when the regions turn totally dry. When the region turns dry, when the water levels of Yamuna recede, that is when the pollution levels at the river are also high.

Pollution levels of the river water of Yamuna

Sadly, the water used for irrigation is found to be so toxic in chemicals that the water that outflows from the fields into canals is highly polluted.

The same water when flows back into the river pollutes the main river source through its flow, hence river Yamuna is considered one of the most polluted waters in the country.

The problem here is that of the usage of heavy toxic chemicals for agricultural purposes. The use of nitrogenous compounds to enrich soil leaves a trace of toxic substances flowing into river waters, increasing toxicity in water and killing marine life, popularly called eutrophication.

It is also reported that the water flowing from the Himalayan ranges of Uttaranchal is rid of any pollution, as there are no industrial elements to force chemicals into the water. Thus, less pollution into the river water at this region is a boon and gift of nature.

The main areas causing polluted elements to enter the river are the regions of Kurukshetra, Panipat and Sonepat. All these regions are industrial areas by their very nature and all the industrial effluents that are discharged from the industries go directly into the rivers.

They have no safe disposal system of industrial effluents and all toxic chemicals and disposals are sent to pollute the rivers.

Entering the zone of Delhi, the river loses track of its original quality. Just before entering the region of Delhi, reports indicate that the river of Yamuna is found to be affected by thousands of microbes in it.

A packet full of water in one’s hands reveals several thousands of bacteria under a research table. These bacteria are not just harmful, they are threatening for life. Looking down further, the region of Delhi is the maximum contributor of waste into the river Yamuna.

The amount of microbes has been counted to be several million of them, the most polluted waters in the country. They are totally unfit for drinking/ cooking purposes.

Water used for washing is again left back into the river. They reach canals and further pollute the water on the journey making them the most polluted waters of the country.

How does sewage increase pollution of river Yamuna?

Another main reason why the water is so polluted is due to the entry of sewage water into the river waters. One can imagine the effects caused when water becomes a mixture of sewage and chemical wastes.

Not only do the reactions cause several damaging effects on water, they are life threatening and have capability to wipe out several generations as such.

When water reaches the areas of Agra, the highly industrialized areas contribute further to the deterioration of water quality. We can see that the water color all along this stretch is totally green.

The rivers are embedded with growth of algae substances that make the river turn from water color to a green blanket. The phytoplankton growing under the river waters cause enormous filth and dust to settle on the waters and the water is thus declared to be eutrophicated.

Steps taken to look into pollution levels of rivers

Let us now look into what the government has done to take measures to stop pollution and save river Yamuna. The pollution control board has issued strict warnings to industrial zones against disposal of wastes into rivers which are the main polluting agents of the river.

They contribute maximum pollutants to the river and are thus known to be a hazard to the rivers. The letting out of sewage into the river is another major problem the city of Delhi is facing and popular sewage disposal channels have to be built in to tackle this menace.

Our rivers are facing a lot of problems when it comes to quality. Knowingly or unknowingly we all tend to dirty our river waters and throw a lot of unwanted substances into them which will in turn cause damage to us only.

We ourselves are the victims of our acts, but along with us, a lot of marine life and animals that depend on water for their survival are thoroughly affected.

The loss of marine life creates an imbalance in the river waters. Water used for irrigation purposes may not all that safe, hence directly affecting the quality of food that we eat.

That is exactly the reason why we see so many water-borne diseases on the rise and the precautionary measures taken to curb such activities are almost negligible, given the lack of awareness among people and ignorant practices. Voluntary organizations have also come forward to contribute in cleaning up the rivers.