The handsome hunk Mr. mango is also known as the king of all fruits. It is the national fruit of our country India.

Mere thought of its sweet fragrance and flavors fills our mouth with water. It is everyone’s favorite whether kids or adults. It is one of the most widely grown fruit in India.

Its biological name is Mangifera Indica. It is cultivated from various species of tropical trees belonging to the Mangifera species.

It is cultivated across the world and is one of the most widespread fruit; specially in tropic countries where it’s production is more.

The Mango fruit takes 3 to 6 months to ripen fully depending on the variety. About 400 kinds of mangoes are known to the human world.

Who knows there might be more which are just undiscovered, hidden from the human eyes. In India, people go by the name ‘Aam’ for mango.

For a certain fruit to be declared as a national fruit, it should have certain characteristics. First of all, it should represent the complete country i.e. India.

The different varieties of mango represent the different cultures, societies, casts, races and mindsets in India. It is a symbol of cultural diversity.

A mango is fleshy and tasty. It is a representation of the beauty of India, its richness and its story of riding strong through highs and lows. 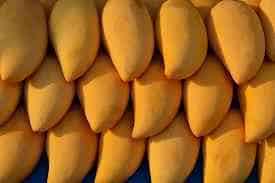 Mango is being cultivated in the Indian subcontinent for about 400 years but surprisingly the western world has had their share for only about 400 years.

Mango has had a very interesting journey from its origins.

It made its appearance, on the face of this about 25 to 30 million years ago, this is indicated by some fossils which were found by scientists over a period of time.

It appeared in Northern India, Myanmar and Bangladesh. From there it travelled to southern India. Mango was an eminent symbol of prosperity back then.

Kings used to gift each other mangoes as a symbol of support. The legacy of mangoes always remained untouched by all dynasties that came to rule over country.

They were all united by their love for mangoes. It is said that Babur was inspired to fight Rana Sangha and established an empire in India.

Humayun were a patron of juicy taste of mangoes. Akbar got the Lakha Bagh near Darbangha constructed.

It was a plantation of mango trees with over hundred thousand mango trees. Aurangzeb sent Shah Abbas of Persia, a gift of mangoes to support him.

Legends have it that Shah Jahan put his own son under worst for keeping all the mangoes to himself.

Not only the mango fruit, but also the leaves, barks and flowers are of crucial importance to our economy. Few of them are used as follows

The wood obtained from the bark of the tree is used for making low cost and sturdy furniture. The wood is used to constructs frames, floors, ceiling board, agricultural equipment etc.

Its bark contains 16% to 20% tannin. This tannin is used for generating a yellow dye and when mixed with turmeric and lime, a bright rose pink is generated. Tannin is also used to fight off Rheumatoid Arthritis and Diphtheria.

Dried flowers of a mango tree are used extensively in the treatment of dysentery and cattarah of bladder. It also cures wasp sting.

The green unripe mango is used in the preparation of curries, Sharbat and pickles. Many small scale and medium scale industries thrive on the business of mangoes.

Ladies working in rural setups have formed small cooperatives for mango trade or items of consumption made from mangoes. This gives them self sufficiency and makes them financially independent.

Some well known varieties of mangoes are as follows

The Chausa Mango is named after the victory of Sher Shah Suri over Humayun in chausa Bihar. It is available in July and August.

It was first cultivated in the garden of a Nawab about 200 years back. Aromatic fragrance, bright yellow color, makes it a perfect pick.

According to some folklore, it was first cultivated by a ‘lame’ man hence named langda. It is fibrous and green in color.

This variety was cultivated by Nawabs of Junagarh in 1931. Its color is bright orange on which it has been named ‘Kesar’. It is one of the most expensive varieties.

This variety has a delicious aroma. It is a medium sized variety usually green in color. It is perfect for use in juices and dessert dishes.

It is known as the king of all mangoes, this variety is most expensive and most sought out for. It has a goldish hue to it and some red sprinkled on top.

This is available from April to June and its peculiar shape makes it quite unique. Its skin is also edible. They are used for making preservatives.

This variety of mango is shaped like a parrot’s beak and hence gets its name from there only. It is not so sweet but an ideal variety for pickles, juices and preservatives.

Mangoes have been an indispensable part of our heritage from ancient times. Without mangoes, we would have nothing to relieve us from the burning weather.

It fills me with elation whenever I eat mangoes. Mango juices, pickles, shakes, Aam Panna, Mango Curry and Mango puddings are among some of our favorite things to eat.

Their juicy taste will never die and continue to fascinate the future generations to come. Mangoes are well known to all hearts floating in the flavors of its juices.

The love for mangoes never comes to a halt and it unites the complete nation into one thread for its love is shared by all citizens.