Importance of the Day

Mahavir jayanti marks the birth occasion of Vardhamana Mahavir. Mahavir was born on the thirteenth day of the Hindu month of Chaitra in the year 599 BC and his birthday is celebrated as the most important festival of the followers of Jainism or simply put, Jains.

Vardhamana Mahavir was born in the region of Bihar, which was earlier known as Vaishali, to Siddhartha and Trishala, the king and queen of Ikshvaku dynasty.

He married Yashodha and had a daughter by name Priyadarshana. He was popularly known as the 24th and the last Jain Thirthankara and reached enlightenment at the age of 72 years.

The story of Vardhamana Mahavir becoming a saint is a very interesting one as he left his palace when he was just thirty years old. He left home to find answers for the various questions that thronged his mind and kept him occupied.

He seeked answers for his questions that dealt with worldly truths and observances and in the quest of seeking answers, he traveled around the world.

He meditated for nearly twelve years and spent his life in penance. After about twelve years, when he found answers to his questions through meditation, he had become an enlightened soul.

The rest of his life he spent in spreading the messages he had been enlightened with and the answers that he had found through his penance.

Siddhartha and Trishala were great followers of Parshwanath, the divine lord in Jainism and when queen Trishala was carrying her son Mahavir in her stomach, she had a strange dream one day.

In her dream, she was told that she would give birth to a son who would make significant contributions to the world and become a divine masterpiece, the whole world would look up to. 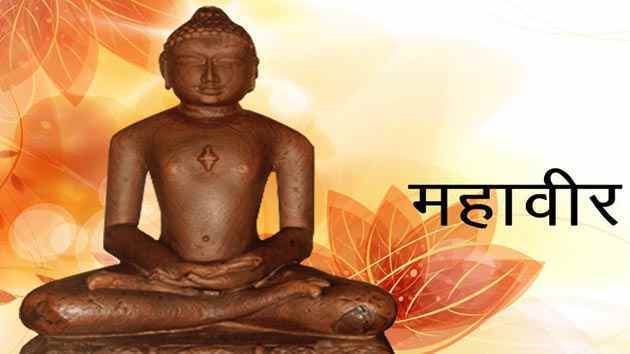 King Siddhartha and queen Trishala brought up their son with a lot of love, care and affection just like any parents would do and gave him all the royal needs and comforts. He was trained to be a brave prince and he followed his parents’ words.

Though he was a brave prince, he was very less exposed to the sufferings and ugly truths of the world. He knew only the good side of the world and the harmful and sad part of the world remained unknown to him inside the comforts of the palace.

So he lived in a different kind of world and was brought up amidst luxuries. When his parents passed away when he was just 28, he started experiencing loneliness and that’s exactly when he saw the true colors of the world around him.

He began to see and experience all faces of the world and in some bitter encounters; he made up his mind to find answers to what he had experienced. He decided to renounce worldly comforts and pleasures and seek answers to his questions.

His elder brother advised him against doing so and instead asked him to look after the kingdom and the dependent family that he had with him. But nothing could change Mahavir’s decision.

His determination took him out of the palace doors at a very young age of thirty and he renounced all worldly pleasures and happiness in the search of truth. Thus he became a monk.

He observed meditation, silence and penance for almost twelve and a half years after he quit his comforts and the experiences he went through in this part of his life made him an enlightened soul. Mahavir started practising silence and he even slept for only three hours in a day.

He quit his basic needs like food and clothing and just wrapped himself in a small piece of cloth. He renounced worldly pleasures at first, and then he renounced even the basic needs of a man and spent most of his time meditating.

He was able to win over his mind by controlling various emotions like laughter, anger, happiness, sadness etc. slowly he began to experience detachment from all kinds of attachments and began to sense a higher level of contentment from within.

At that higher state, he is said to have reached a state of enlightenment. After hitting enlightened state, Mahavir experienced strange occurrences in his dreams, almost ten different kinds of dreams that have been elaborately discussed and described in Jain scriptures.

He traveled a lot during his mediating days and he spent most of his time in the northern and eastern part of ancient India’s territory.

After attaining a state of enlightenment, Mahavir spent the next thirty years of his life trying to spread his words and teachings to the common people. The first few persons who were very influenced and attached to his preaching were eleven Brahmins.

These Brahmins, after understanding his influences and preaching, converted to Jainism and followed their doctrines their after.

These eleven followers of Mahavir brought in many other similar followers and influenced them to convert to Jainism on their own desires and thus the religion drew people, many of them, from different faiths and different walks of life.

One aspect which drew people closer to Jainism and Mahavir in particular was the fact that, Mahavir never taught people or preached in Sanskrit.

At that time, it was only the learned and the noble people, especially Brahmins of the higher order who were fluent and deeply involved with the Sanskrit language.

So for the common masses, there was a disconnection because people could not follow difficult things in the language they didn’t know.

But, when Mahavir changed this order and stared teaching in simple, local dialects, it formed a connection with the masses. People were able to understand and relate to their own lives when they were taught in their local language.

This brought them closer to the faiths of Jainism and many of them started converting to that faith. Mahavir stressed on many important values in life that had to be followed to make life fruitful.

He preached a life of harmless living, not to hurt others sentiments, to always speak the truth, to never cheat others, to be true to oneself, to bring in devotion towards lord and renounce pleasures that are not required by man, to quit materialistic desires and possessions and finally to be true and sincere to our own self.

People who follow Mahavir’s set of principles and values are called Digambaras.

The day of Mahavir jayanti is marked with religious processions, chanting of prayers with devotion towards lord. People engage themselves in charitable activities and donate food and clothes for the needy.

There are many Jain organizations throughout the country that are engaged in many charitable activities.

There are many welfare schemes developed by the Jain Charitable trusts in the name of lord Mahavir to aid higher education of deserving students and many charitable, fun raising events help to collect money in lots and direct them to charitable activities.

Not only in terms of charitable activities, but followers of Jain form of living also allows them to lead a life full of simplicity at all levels.

They usually dwell in joint families and on the most auspicious occasion of Mahavir jayanti , they offer Holy baths to the lord and the day is well spent in chanting and prayers.

Their holy prayers are also chanted at Jain temples. They observe fasting on many important occasions and believe in the power to control one’s mind to achieve liberation from worldly distractions.

They believe in the lord’s prayers and spend a major part of the day chanting hymns in the name of god.

India is a beautiful land where many religions live in harmony and one religion differs from the other in terms of its customs, faiths and religious beliefs.

People from different walks of life have historical backgrounds of a rich cultural heritage they have been part of and that speaks volumes of the rich tradition that we have acquired.

Jainism believes in simple living and renouncing materialistic and worldly pleasures to put in one’s focus towards finding the real and true purpose of one’s birth on this earth.