Speech on Mahatma Gandhi (Bapu) for Children in Easy Words 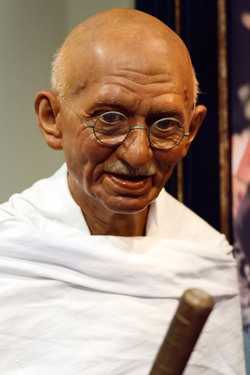 Good morning everyone present here. Today it is an honour for me to speak about the great soul and father of our nation Mahatma Gandhi. Mohandas Karamchand Gandhi was born on 2nd October in the year 1869 at Porbandar in British India.

Throughout his life he preached the doctrine of Satyagraha Swadeshi movement and non-violent mass movements. He was an extremely important character to the Indian freedom struggle particularly at the time when the British left India and gave her its independence that it deserved. The father of Mahatma Gandhi was the day one of the poem on the state which was a princely state in Kathiawar.

After the first world war the National Movement in India became more vigorous and mass based. It became stronger on account of the shallowness of the promise made by the British government during the war and also due to the arrival of Mahatma Gandhi on the political Horizon of India.

This period of 1919 to 1948 is called the Gandhian Era because of his marvellous work in the political field. During this time, he had also assumed the leadership of the Indian National Congress.

From 1893 to 1914 Gandhiji practice law in South Africa where he faced discrimination directed at Indians. Initially us Throne of it rain which was meant for whites. Instead of having a first-class ticket he was made to travel in the third-class compartment.

In January 1897 when Gandhiji returned from the brief trip to India a white mum attacked and tried to hurt him. It was an early indication of the personal values that would ship his later Champions and he refuses to press charges against any member of the mum stating it is one of his principles not to see through dress for a wrong doing in a court of law. He preached to forgive and forget.

Gandhiji returned to India in January 1915 and spend the next 4 years in studying the Indian situation. He was introduced to the Indian issues of politics by Gopal Krishna Gokhale who is also known as the political Guru of Gandhi.

Gandhiji’s whole philosophy was based on nonviolence. According to Gandhiji it is the weapon of strong Mighty and powerful individuals. He was of the opinion that neither an individual in our country could gain anything by using violence methods.

The Vow of ahimsa implies that one must love those whom he or she believed to be unjust. He always preached that we should oppose tyranny but not the tyrant. One who practices this must be prepared to sacrifice everything except honour.

He launched many movements for gaining freedom but none of them were violent and his non-cooperation movement was suspended when the movement was at its highest point just because of a violent activity by one of his followers in which 22 policemen were burnt alive.

A new direction given by Gandhi to the national movement was the introduction of the comprehensive constructive movement. To win India’s freedom he attached the greatest importance to individual voluntary self help covering almost all aspects of life.

Shri Gandhi wanted to awaken the government spirit of the people so that they overcome their inferiority of complexion and stand up in defence of their dignity and status. This was the wider meaning he gave to Swadeshi and Swaraj.

Gandhiji also promoted local self government bodies like the panchayat raj. Does the new direction that Gandhiji gave to the national movement was that he made it a mass movement, selectively used Satyagraha, laid stress on non-violence, enlarged the goal of freedom movement to complete Independence and added his constructive programme to go on endlessly.

Gandhiji believed in a classless society and considered the state is a necessary evil. He believed in the centralised society with equality pervading everywhere in life and in a government of the village through and annually elected Panchayat.

The life of Mahatma Gandhi is filled with various heart shapes which you overcame in order to help this nation of hours achieve its glory and independence.

Very few people in history have accomplished what Mahatma Gandhi has conveniently achieved, that too, with nonviolence. His idols are still relevant in today’s world and many people still follow him as their role model. He was given the title of Mahatma meaning great soul by the great poet and Nobel Laureate Rabindranath Tagore.