Maharashtra is one of the state of India. It is located in the western part of India. Mumbai is the capital of Maharashtra, and it is also known as the financial capital of India.

There are many reasons to love Maharashtra. Maharashtra is 3rd most significant state in India is wise. It is the second most populated state following Uttar Pradesh if we talk about it population-wise.

Maharashtra has the Arabian Sea flowing on its western coast. The neighboring states of Maharashtra are Gujarat, Madhya Pradesh, Chhattisgarh, Goa, and Karnataka.

The main rivers of Maharashtra are Godavari and Krishna. This state has many big cities like Mumbai, Pune, Aurangabad, Nasik, Nagpur, etc.

As we all know that Maharashtra is a very populated state. There are various types of community living there, such as Hindu, Muslims, Christian, Jain, Buddhist, Sikh, etc.

People of Maharashtra are multi-lingual. They speak many languages, like Hindi, Gujarati, English, Marathi, Kannada, etc.

Places to visit in Maharashtra

Maharashtra has a huge number of places to visit. The Mumbai city is the center of the attraction itself. There are various places to visit in Maharashtra, along with Mumbai. These places include:-

Mumbai – The Capital city of Maharashtra

Maharashtra has very well known for its fruit production. The state produces a very good amount of fruits. The popular cities of state popular for production of fruits include:-

India is our country and the Maharashtra is located in the western part when we look at its location. The capital city of Maharashtra is Mumbai, well known as the financial capital of India.

Maharashtra is popular for many reasons, if we look at the area covered by the state; it appears to be the third largest state in the country.

Population wise, it is the second most populated state in the country. The regional language of the state is Marathi, but we can also find majority of Hindi speaking community residing in the state.

The state has Arabian Sea flowing on its western coast. This state is surrounded by many states like Karnataka, Goa, Chhattisgarh, Madhya Pradesh and Gujarat. Godavari and Krishna are the main rivers of Maharashtra.

The state of Maharashtra has the Western Ghats running through its western coastline, where we can also find the world famous Konkan railway line.

The state is mainly housed in the Deccan plateau. The state has many important cities like Mumbai, Pune, Aurangabad, Nasik, Nagpur etc. 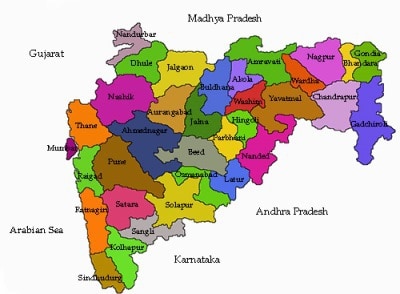 Majority of the people practise Hinduism, along with the Muslim, Christian and Jain communities. Buddhists and Sikhs also form a small portion of the population.

Along with Marathi speaking people, we can find a lot of Hindi, Gujarathi and Kannada speaking population in the state.

The state is into a lot of industrial activities right from manufacturing sectors, automobiles, textile industries, media and telecom industries, fashion ventures, tourism and most importantly, the film industry.

The state is also a leader in terms of its agricultural production and boasts of some elite educational institutions, making it a very popular state in the country.

A tropical climate is usually experienced in the state and it receives reasonably heavy rains during the monsoon season. Black soil is the trademark soil of this region.

Maharashtra is a very popular place in the map of India and boasts of great culture in travel and tourism fields. Some of the most common places in this state are listed here.

Let us explore them one by one. The landmark gateway of India stands tall and triumphant at Mumbai and it was built as early as 1924.

The suburban railway connection can be experienced when one boards a local train at Chhatrapati Shivaji terminus.

This railway station is very popular for its architectural styles and we can find this as a landmark in many of the Hindi movies of yore.

The ancient temples at Ellora offer a bit of history and the famous Kailasa temple have many a stories to tell from their carvings.

It is a UNESCO heritage site and we can find around a hundred caves, each telling its own story and have thousands of carvings within these caves.

Aga Khan, the Mughal king built his own palace in the 19th century and today it’s a very famous tourist attraction for people who re interested in knowing more about our historical kings and queens.

The kanheri caves are other ancient caves containing Buddhist paintings and they also belong to the 19th century.

The Siddhivinayak temple at Mumbai is the abode of Lord Ganesh and is very famous among ardent devotees.

Many celebrities from Bollywood can be seen walking barefoot from their residences all the way to the temple to make their offerings for lord. Shivneri and Pratapgad are other hill top forts that have historical significance.

Pratapgad has mention in history because of the battle that was won in the 17th century. The famous Mahalakshmi temple at Kolhapur is known for its 12th century architectural styles and is known to be the abode of power and devotion among many devotees throughout the country.

People from all over the country visit this place to seek blessings from the goddess and special prayers are offered to her on auspicious days.

The Rajiv Gandhi National Park is an animal sanctuary and home to many animals and birds along with a special snake park, which is the main attraction of the sanctuary.

A less known saline water lake with historical significance in Lonar, which is located in the Buldhana district, is the Lonar Crater Lake.

Fort Bassein is not preserved by the state and when one visits this place, they can find the ruins of the monument and torn-apart structures like arches, pillars and other fallen pieces of the once-famous fort.

Mulshi dam and Rankala Lake are other breathtaking picnic spots that one can spend time with families and friends.

The Krishna temple at Pandharapur is also very famous for its age-old architectural styles and believed to be one of the main worship centers of Lord Krishna.

Last but not the least, the world famous UNESCO heritage sites – the Ellora caves and the elephant caves has to be mentioned to mark their rich sculptures.

Famous People of the State

When we peep into history, we can find a lot of significant people from rulers of dynasties to political leaders having connection with this happening state.

The very famous Chhatrapati Shivaji is an idol to all Marathis and they worship him with all devotion even today. They consider him as their leader who established and brought fame to the Maratha Empire during his ruling days. 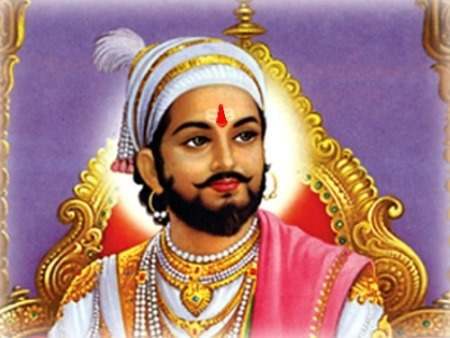 The person responsible for writing the constitution of India and the man who fought for the rights of the downtrodden communities, Dr. Baba Saheb Ambedkar was also from this state.

Other personalities like Jyotibha Phule and Baba Amte were also from the same state. Lokamanya tilak finds mention in the freedom struggle diaries of India and so is Vinobha Bhave.

In the field of cricket, one can find many cricketers to be part of this state and some of the noted ones are Sachin Tendulkar, Ravi Shastri, Vinod Kambli, etc.

Sant Tukaram and Namdev were religious leaders who fought against orthodox practices in the society to bring about a revolution in the religious practices of the state.

In the field of politics, right from Bal Gangadhar Tilak to Bal Thackeray and from Pramod Mahajan to Sharad Pawar, there are many political stalwarts that shone in this state.

The entertainment industry has made the biggest name in this state with a host of actors, actresses, directors, producers and musicians having Maharashtra as their home state and more closely, Mumbai as the place where they reside.

Amol Palekar, Nana Patekar, Rajnikanth, Madhuri Dixit, Padmini Kolhapure, etc belong to this state. The list is endless and one can imagine the famous celebrities and personalities coming from this state.

Now comes the Bollywood connection. The capital city of Maharashtra and also the financial capital of the country are home to majority of the film fraternity and celebrities from cinema.

Many studios are situated in this capital city. The city is also house to some of the top industrialists of our country and has rich culture of art and traditions in its going.

The world famous pav bhajis are a product of this city and the chats that we enjoy on rainy evenings are all originated from here.

Not only this, the city also has some world famous educational institutions- schools and colleges that one can find nowhere else.

Mumbai is popularly known as the city that never sleeps, that is because the city is almost always alive, even late in the nights.

Popularly called as the new York of India, the city boasts of excellent infrastructure and has the latest technologies induced in development.

It is connected by rail from all important cities of India and the international airport speaks of high standards and is something to be proud of. The Mumbai-Worli sea link is a marvel in itself and is one of the best constructions in our country till date.

Food and shopping is something that one can’t miss when at Mumbai. Being the financial capital of India, it is home to one of the oldest financial markets of the world – the NSE and the BSE, the National Stock exchange and the Bombay stock exchange facilities.

Fashionable and elite celebrities flock to this city to make it their home and one can find it to be a favorite place among the youth.

The state of Maharashtra is a lively place and the city of Mumbai, in particular is a must-visit place in the country and youngsters consider it a happening place.

It has many attractions, right from the ancient structures, the fashion trends, religious places, food streets, shopping malls etc. Overall, a tour of Maharashtra is worthwhile and thoroughly enjoyable.