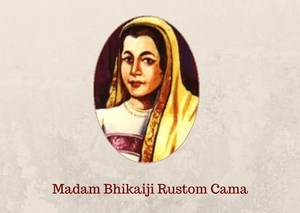 Bhikhaiji Rustom Cama, popularly known as Madam Cama, was one of the few prominent female leaders that were part of the Indian independence movement, in the earliest years, that was raised by the Indians against the unjust treatment meted to us by the British Colonial Rule.

Madam Cama was born on the 24th of September, 1861 in the colonial presidency of Bombay, now known as Mumbai. Her parents were very well to do people and influential members of the Parsi community.

Her father was a renowned lawyer and a businessman. In those days’ it was the norm for Parsi girls to attend the Alexandra Native Girl’s English Institution. So did young Bhikhaiji Rustom Cama, and turned out to be an extremely intelligent and obedient student with a knack
or English literature and language.

However, Madam Cama was a stern hater of the British Imperial rule in India. As a result, these issues rattled through their married life making it an unhappy and miserable one. Madam Cama spent most of her time in activities that detached her from her household as well as her husband.

Madam Cama was a stern believer that India deserved to be independent of the treacherous colonial rule and as a result, she spent most of her life as a political activist and is most well-known for the same.

Madam Cama was a philanthropist in the true sense of term She had the ability to connect to the people and the will to help them. In spite of being from an extremely rich family, she never hesitated to mix with the needy.

On October 1896, when the Bombay Presidency was hit by famine as well as bubonic plague, Madam Cama was one of the foremost helpers along with the teams of professionals from Grant Medical College so as to aid the people who have been infected. She also went several places inoculating people with vaccines to prevent the infection.

During this process, however, she herself caught the plague disease and went to Britain for further specialized medical care as she had become extremely weak.

During Madam Cama’s return to India, in around 1908, she came to know about Shyamji Krishna Varma, who was an influential figure among the Indian community in London. Shyamji Krishna Varma was an extremely vocal leader and gave many nationalist speeches in Hyde Park in London which were considered by the British to be on the borders of sedition.

Through him, she met the famous Indian statesman in Britain, Dadabhai Naoroji who was the President of the British Committee of the Indian National congress that time. Later, she even worked under Dadabhai Naoroji as his private secretary. Along with these two leaders, Cama cofounded Varma’s Indian Home Rule Society.

Threatened by Madam Cama’s public presence, during her stay in London, the British Government sent her a proposal that she will not be allowed to return to India unless she signs an agreement saying that she will refrain from all activities that aim towards the abolition of the British Imperial Rule in India.

She chose not to sign the agreement and stayed in exile throughout Europe spreading the cause for India’s independence.

Later that year, Madam Cama toured Paris and set up the Paris Indian Society with other influential like-minded Indians. While in exile in Europe, Madam Cama published and distributed revolutionary writings, the epicenter of which was the abandonment of the treacherous British colonial rule in India and emphasizing the need for India’s independence.

She founded the Bande Mataram Magazine after the British banned the chant of Bande Mataram song in the Indian subcontinent. She also published another weekly called ‘Madan’s Talwar’ in memory of Madan Lal Dhingra after his execution.

Madam Cama attended the second socialist congress in Stuttgart in Germany, where she appealed for India’s independence on humanitarian grounds after the nation was famine struck and then was attacked by deadly bubonic plague. She also unveiled a flag which was a predecessor of the Indian National Flag we have today.

After she helped Vinayak Savarkar escape from British, she was asked for by the British Government to be extradited. But the French government did not give her up and later, is said, that the great Russian leader Lenin, also invited her to stay in Soviet Union if she wished to.

Being influenced by Christabei Pankhurst and the Suffragette movement, Madam Cama became a vehemently vocal supporter of gender equality rights for women and in Cairo in 1910, she said, “I see here the representatives of only half the population of Egypt.

May I ask where is the other half? Sons of Egypt, where are the daughters of Egypt? Where are your mothers and sisters? Your wives and daughters?” She wanted not only rights for women to vote but also all other rights equal to any other man.

In around 1935, Madam Cama became extremely ill, suffering from paralysis which was the result of a stroke that had occurred the previous year.

At that time, she requested the British Government with the help of Sir Cowasji Jehangir to lift the ban on her entry into India. She later signed the agreement to distance herself from all seditious activities and only then she could enter India. About nine months later, she died on 13th August 1936 aged 74.

Madam Cama was one of the earliest supporters of women’s rights in India and even after her death; she gave away a large portion of her wealth to Avabai Petit Orphanage for Girls.

She was a woman of many qualities and her thoughts and ideas were much ahead of her time. Her tireless toils and indomitable spirit definitely played a role in the independence of India and she is remembered in all of our hearts.