As per botany Lotus’s original name is Nelumbo nucifera. It is also known as sacred lotus or bean of India. It is a kind of aquatic plant. It was adopted as the national flower of India in 1950 after the formation of our constitution. Generally these species are found in south eastern

Asiatic countries, Japan, America and Europe. It grows usually in the stationary water bodies which are kind of lakes, ponds and artificial pools.

It is spread around horizontally up to 3 meters and it is 2 cm long. Leaves grow up to length of 60 cm. And flower grows fully fledged up to 20 cm respectively.  On an average it is having 30 numbers of petals when it gains maturity.

It is tied in our culture, heritage and history of our nation. To reinforce the qualities of the nation and to make country’s large image among the whole world, lotus plays an important role. Lotus denotes the truthfulness and strength of the nation like India.

It is termed as Padma which is defined in Sanskrit. From time to time, from past to present, Lotus has been treated as an integral part of nation strength.

Lotus is the only aquatic plant which identifies the Indian core values of psyche and it also denotes the Indian mythology.

It symbolizes fruitfulness, wealth, spirituality, illumination and knowledge. The most fascinating point about lotus is that it grows in muddy water such that it remains untouched and its purity never diminishes. Therefore lotus also symbolizes the purity of mind and heart.

Our national flower Lotus or in other words it is also known as water lily grows only in shallow waters as an aquatic plant of species Nymphaea. It is a bright and aromatic flower which have floating leaves over the muddy water bodies. The flowers and leaves of lotus flows and their long stems contain air spaces in between them.

Pattern of petals of the lotus are in proportionate. Root functionality of lotus is carried out by rhizomes which fan out horizontally from inside the mud and below the water bodies. Lotus may be grows in the muddy water but it carries tranquil beauty which make you feel heavenly and it is delighted to have a look on lotus over the pond’s surface.

It is cultivated across the world for the food which includes its stems and rhizome. The lotus is actually a seed which propagates itself in a fully grown flower.

The seeds are kept in damp soil and remain exposed to sunlight for minimum 7 hours every day at initial stage. Temperature maintained around 25-30 degree Celsius. 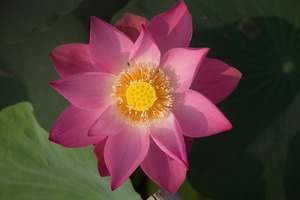 Lotus is also considered as economical and medicinal value. Lotus is a plant whose every part is consumable. Its petals are generally used as an ornament purpose like garnishing. Fully grown leaves can be utilized for packaging and for serving food.

In India, it is considered beneficial for health if the food is served on lotus leaf. It contains huge amount of fiber and vitamins like B2, B1, B6 and C along with the minerals like copper, phosphorous, manganese and potassium. They may also be used as a dry fruit which is also known as phool makhana.

Lotus has certain use in medicinal area. Cardiac ailments can be reduced by using lotus tea brewed which gives relief. It also acts as detoxifying agent and helps to stop blood flow in case of injuries. Lotus flower is a good treatment for the wellness of reproductive organs and stomach.

It also helps in normal development and growth of fetus during pregnancy. It is a home remedy in case of throat complications or pigmentation in skin. It can be a strong agent against infections like diarrhea and small pox etc.

Its consideration is very sacred in both Buddhism and Hinduism. Hindu deities like Lakshmi, Brahma and Saraswati are depicted as they are always seated on a large grown lotus flower. Lotus across the world denoted the powerful symbol of beauty and it describes someone with delicate and pure attributes.