Which is the longest river in India?

River Ganga is the longest river in India. It covers a total of 2,525 kilometers in India. 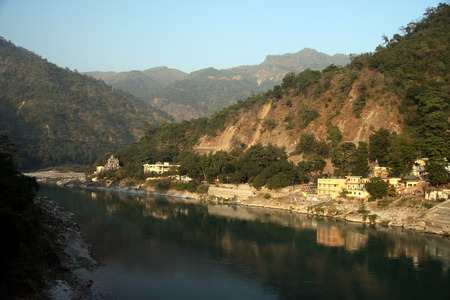 Controversy between Brahmaputra and Ganga about the longest river in India

The river Brahmaputra covers an entire distance of 2900 kilometers in India. Brahmaputra is the only river in India which has been given a male name, whereas all other rivers are named after female names.

River Ganga as we know flows a distance of 2525 kilometers in India. The surprising thing is that the river Brahmaputra is definitely longer than Ganga but the distance the river covers in India is very less, only 725 kilo meters. So, In India we consider river Ganga to be the longest river in India.

The route covered by river Ganga through the plains of India

The Ganga takes birth in the Gangotri glacier in the Himalayan mountain range of India. Throughout its journey it passes through many important regions and cities of India.

At some points it is a major provider of agricultural water supply at major centers of the country. At the same time, it provides the major source of water to all the cities through which it passes through.

A part of the river water gets diverted to Bangladesh where again the river finally meets the Bay of Bengal on the other side.

Farakka Barrage is the point where the river Ganga exactly branches into two routes, one going towards Kolkata and the other entering the country of Bangladesh.

Why is Ganga the second most polluted river in India?

At the same time, Ganga is the second most polluted river in India. When it crosses through many important industrial centers of the country, the river Ganga along with its tributaries become so polluted that they are filled with millions of microbes when tested under a microscope.

The industrial centers just throw their wastes into the river waters, filling them with filth, chemicals and unwanted poisonous substance.

This has spoiled the natural beauty of the river waters and has made them unfit for consumption in the recent past.

Also, the burning of dead bodies near the sacred Ghats of Kashi / Benares has only added to the worsening of the situation.

Dead bodies floating on the river waters have posed threat to lives, and they leave the water highly contaminated and they just cannot be taken for any use.

The cleanliness drives carried out at Kashi where Ganga holds primary importance has cleaned up most part of the river and has made them fit for at least taking a dip in the water without worries.

But people continue to pollute the river not realizing the damage they are causing to the natural environment and are destroying the natural, delicate balance created in the environment upsetting the water habitats and surrounding flora and fauna.

Cultural significance of the river Ganga in India

River Ganga has been with the land of India and with Indians since ancient civilizations. It has been through rich civilizations, it has seen the rise and fall of many civilizations, and it is considered and revered and worshiped in India.

People perform specific rituals to river Ganga, they chant hymns for her, and it is of utmost cultural significance in India to worship her just like an idol.

We as citizens must also adhere to these specific principles to save our river waters. River waters are soon drying up everywhere.

If we do not care for river waters, then one day we would be without a drop of water in our houses. We would soon be catching up with water scarcity if we do not understand the importance of our water resources.

River Ganga being the oldest river of our civilization, the one that has immense cultural and religious importance should be first on our list and next time we plan to take a holy dip in the river, we should also take a vow to maintain the cleanliness in the river.

We should spread awareness regarding the same by posting cleanliness messages on online portals and help the government in turning the project into a reality.