We Live in Deeds, not in Years | Essay for Children 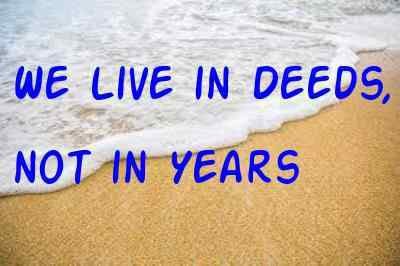 It is often said by our elders that a men is not known by the years he has spent on the earth but by his actions. This is definitely true. A good, honest and a reputed person always reside in our hearts. They have a special place in the hearts of all people.

A reputed person will always have more people at his funeral than a dishonest and a scrupulous person. The dishonest man is not loved by anybody and hence no one finds their death a reason to waste their tears over. They are always remembered by the malicious acts they have committed. People act cold and indifferent to such kind of people.

A person with a scrupulous and a dishonest mind will only commit such actions but a person with an affectionate mindset will definitely act as a good one. This will be reflected in his actions. A person’s mindset is reflective of his actions. Thus, your actions are the mirrors to your soul.

They are the doorway which determines how you want to be remembered in other people’s minds.

Age is just a number. A person might die at the age of 20 which is a very young death. But if he was a noble soul, the world will remember him as a good man.

The man has a higher purpose to fill, to come on this earth. He has been sent by god to help the other beings and also help himself. A life lived for yourself is a life wasted. But a life lived for others can be truly called a life lived to the full extent.

Humans have not been sent on this earth to waste their time away in a never-ending circle of activities- eating, sleeping, partying, studying and finding job and setting down. No, humans are not a robot. In all this hustle and bustle; they seem to have lost their heart, they need to be rejuvenated again. No! Rejuvenation is not drowning in a pool of beers. But it is something that uplifts your soul and helps to heal it.

Help a blind men cross the road. Pick up a strangled puppy left to die on the roads because a human being could not control the speed of his vehicle. Contribute to the society with a higher purpose.  Donate your belongings to the people in need.

When you donate some of your goods, the poor will always endow you with some blessings. And blessings are the highest form of gift which a person can ever give or receive. No I am not talking about the forced blessings which are given and received as a matter of courtesy.

But I am talking about the blessings that come straight from the heart. Those blessings are pure and pious. If a person is endowed with such blessings, he can never fail in his life. But to receive such blessings, one has to commit some tasks that actually make him worthy of these blessings.

When we go down the annuls of history, we come across many examples of famous personalities who lived short but contributed large to the wellbeing of other beings. John Keats, a famous English poet died at a very young age of 25. But the amount of his contribution in a very less time span is an achievement to reckon with. Similarly, William Shakespeare the father of English Literature lived a short life of only 39 years.

But the wonders he scripted are still taught to all students. His dramas, sonnets and novels are still famous all over the world; even after 400 years of his death.

A man like Swami Vivekananda is known all over the world for his impeccable contribution to the society. He vehemently opposed the gruesome practice of Sati and encouraged education in all spheres of life. It was due to his efforts that we see a modern India today.

Though he lived only for 30 years yet his contribution to the Indian society was too large that he was named as the ‘Father of Modern India’.

The real longevity of a person in the number of years does not matter. But what matters is the act he commits. It really matters if he was loved by people or not.

A good person always remains alive in his deeds. But a selfish person who is greedy of wealth and money never attains a place in the hearts of people. Saving money and working hard for money you earn is good. But stomping on other people savings for money and wealth is wrong for your own selfish purposes.

Their stay on Earth is forgotten and perishes into oblivion. They are hated and their presence is avoided. But the most cruel and gruesome men are always remembered because their psychotic actions keep on haunting the memory of others like horrible nightmares.

Such men leave a negative impact on the memory of others. If you want to be remembered by one and all, make sure that you are remembered by the good you have done in the world. Your image should not be tarnished rather it should be reputed.

This proverb was given by Shakespeare. He says that respect is not a one day process. Humans acquire respect over years. A human may die at 20 or at 100 but will actually die someday. But it is the human’s actions which determine his stay and his lifestyle in those years.

Legends like Mahatma Gandhiji, B.R. Ambedkar, Jawaharlal Nehru are still remembered by one and all for their contribution to India. It is all because of the deeds they have done to serve their country that their names have been etched in the books of history.