Animals dominate the forest area. There are so many categories and species of animals. From predators to prey, from birds to reptiles to mammals, the count is infinite.

The relationship between a predator and a prey has been down to a many years starting from the age of dinosaurs.

In today’s times the prey forms the second bas of the pyramid of food chain whereas the predators sit on the top. The first base belongs to the primary food suppliers that are plants and trees.

‘Lion‘ is a common name that we have heard right from our nursery classes. He is known to be the ‘king of the forest‘. Common right?

Interesting Facts about the Lion

Female lions also known as lioness don’t look as majestic as the male lion. They have lesser hair on their body and are smaller in body dimensions.

Male lions are bigger in proportion, have a good amount of fur and mane and look very majestic

Lions can be divided according to the regions in which they survive. Their looks and body proportions also undergo a bit of a change when the region changes.

African lions – lions living in the areas of Namibia and surrounding lands are a bit bigger in body proportions. They are more ferocious hunters as well.

Their mane is partly black in color. On the other hand lions found in India are smaller in body proportion, less ferocious and their mane color almost matches their body colour.

Every pride has 4-5 female lions that catch the prey and provide food for the pride.

And every pride has only one male lions whose duty is to protect the females and the cubs from the attack of other lions and animals.

The life span of a lion is 10-14 years in the open, because of the serious injuries they suffer from their fights their lifespan is greatly reduced

But in captivity lion can survive for more than 20 years.

Does a Lion eat another Lion 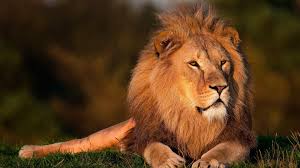 Male lions are known to kill and eat the cubs of another male lion to make sure his cubs are the ones to survive.

“Survival of the fittest” By Charles Darwin’s

Other than that, lions do not each other.

Yes there are times when a lion kills another stranger lion who wanders into his territory but even after killing they do not eat them.

How long can a lion survive without food and water?

But occasionally a lion munches cucumbers and wild melons to replenish the water content in his body.

When do the cubs start eating meat?

The cubs start chewing on meat from the time when they are 6-8 months old. Before that they only feed of mother’s milk.

What is the reason that lionesses do not interfere when an outsider lion tries to kill a lion of the group and cubs?

The only duty of the lionesses is to pass the best genes on to the winning male.

When their pride male is fighting another stranger male, their only task is to flee with the cubs so that the other male doesn’t attack the cubs.

They join the fight only when they see that their pride male has weakened the other male.

But if it’s the other way around( that is if the other male wins), then they have no choice but to let their cubs die in the hands of the overtaking taking male, just to give birth to the best genes possible.

How does a lion cub look after birth? 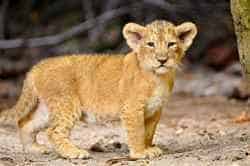 A lion cub is born with little black spots all over its skin; it disappears when they grow older.

After birth their weight stays between 1-5 kilograms and they open their eyes after 3 to 11 days.

The mother lioness goes away from the pride to a thick undergrowth or forest cover while giving birth.

Cubs remain hidden for 1-2 months before they are introduced to the pride.

Nowadays this kingly animal is suffering extinction in many parts of the world due to poachers and lack of forest cover.

Poachers are the people, who illegally hunt down animals and sell their useful parts like, skin teeth mane, hoof at very high prices.

Different products are made out of these later on. Due to excessive greed of man this beautiful animal’s race is coming to a tragic end.

It is high time that we take up serious steps to conserve this creature or one day it will be rubbed off from the face of the earth like another saber tooth.