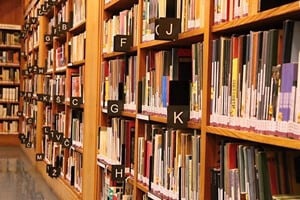 A place to read without being disturbed, somewhere where you can study with concentration, where you can trust the people around to maintain silence, the book lover’s paradise, The Library. A Library can be defined as a place with a huge collection books, documents or files.

But most popularly, a library is a place where you could borrow books, read them and then return them in an allotted time slot. Libraries usually contain books of different categories and types.

The Oxford dictionary defines a library as a building or a room containing collections of books, periodicals, and sometimes films and recorded music for use or borrowing by the public or the members of an institution.

A Glimpse into the past

The early libraries were more like archives, where clay or stone tablets, scriptures made of papyrus and other such important information was kept. The earliest of the libraries was discovered in Ugarit, an ancient port city, whose ruins can now be found in Syria.

As time passed and people started to make paper, books came into existence, which were a bunch or a stack of paper held together by a string and encased in a hard bound leather cover.

Then people started to maintain personal libraries with a huge collection of books. One of the earliest recorded personal libraries was present in Ancient Greece as early as the 5th century BC. As the number of books increased, government institutions started maintaining library for the general public.

The library of Alexandria, situated in Egypt, was regarded as the most largest and significant libraries of the ancient world. It had one of the largest collection books of varying categories and origins.

The library was renowned as a major centre of scholarship and was visited by scholars all over the world.

These libraries are usually a part of a bigger main library. Academic libraries are incorporated by universities, colleges, schools and other such academic institutions for the use of students and the staff. These usually contain books of academic significance and maybe based on the curriculum followed by institution.

They may also have program specific sections which are included to help the students succeed at their respective majors. National libraries are basically a place where information is stored for national purposes. In some places, it is mandatory for an author to submit a copy of his or her literary work to a national library.

Public libraries are usually run by government bodies and are made for providing service to the general public. If these libraries have branches, then an account holder can borrow books from any branch from across the nation.

They provide free services to the public and are formed to fight the rising rates of illiteracy. Research libraries provide researchers, scientists and scholars with the required research data.

Any library with a vast amount of books covering various topics and fields can be called a research library. Reference libraries are those libraries in which people cannot take the books out of the library building.

The readers must borrow the books, read and then submit the books back before leaving the library premises.

Libraries used to be the go-to place for every individual with curiosity regarding any topic, doubts of any kind and the interest to read.

People would make it a habit to regularly visit the libraries to check the new books that may have arrived. But ever since the venture of the Internet, electronic documents, e-books etc., libraries have been at a decline.

An average individual may never even visit a library because information is available fast and on the go with smartphones, tablets and laptops.

A thing which we could only learn by reading is now available on tutorials, thanks to YouTube. Reading books is slowly becoming a rare hobby.

Though libraries are still extensively used by students all over, the importance it once had in daily life has significantly reduced.