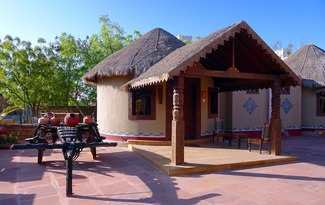 Which is the largest district in India?

Kutch is the largest district in India. It covers a total area of 45,674 km square in the western part of India, in Gujarat state.

It is a very large region in the western India spanning border areas from Rajasthan on one end to Pakistan on the other. It has the Arabian Sea to its south and to the north, faces a large desert area.

Since the desert regions cover a very large area of Kutch, it is categorized as a semi-arid area and the region receives very scanty rainfall through the year.

The district of Kutch has about 939 villages, a very large number and the population is also quite huge, almost about 2,092,000. The district headquarters can be found at Bhuj.

Characteristics of the region of Kutch in Gujarat

It is interesting to note that the Kutch region makes up for almost 24% of the total land area of Gujarat. That is, almost a quarter region of the state is occupied by the largest district in the country, namely Kutch.

Kutch is made up of many small Ranns of Kutch all along its northern regions and also the north-eastern belt. People face water scarcity through most parts of the year.

The reason for this is, Kutch faces desert region towards its northern most parts. There is hardly any water source here.

The only source of ground water and potable water is in the central water ridge line of Bhuj. This ridge line runs exactly through the centre of the Kutch district.

Since Kutch runs along the tropic of cancer, this region is also one of the hottest regions of the country and the problem of water scarcity looms large in the region.

It has been reported that, in a span of 5 years, if we look at findings, only a year will have a good rainfall and the remaining years run dry for the entire years and receive scanty or very less rainfall, thoroughly insufficient to reach water demands.

Most part of the Kutch district is rural based. People lead a life based on a rural lifestyle, rearing cattle for fodder etc. The economic conditions of people are so poor that the occupations that they are a part of, hardly yield any income for their sustenance and survival.

Scanty rainfall, no water resources, no water for men or livestock leads to an impoverished economic state. There was a time when most of the people migrated from these regions to urban areas where they could make a living.

There are many groups/communities of local people who belong to many religions, the major being Hindu, Muslim and Jain.

These religions are further subdivided into many sub sects and people usually belong to economically poor classes and backward communities.

Local people have their own festivals, follow exclusive traditions, eat foods that allow them to sustain in the desert prone area and have a community to look after their interests.

These people have their annual fairs. The Rann Utsav at Kutch is very famous for its display of culture, traditions, and a good blend of music and dance beats, together with colorful bandhanis splashing colorful art works everywhere.

During the full moon, the Rann of Kutch appears as a silver laid desert land and on this very heartland people come in droves with their families and celebrate the occasion.

It goes on for months and people from all over India make it their preferred holiday destination and visit it with their large families.

They sit and listen to the music, enjoy the dance beats and eat variety of Guajarati and Rajasthan cuisines.

An ultimate blend of tradition and modernity, where young meets the old, west meets the east, people return with a lifetime of experiences and memories.

The earthquake that devastated the Kutch region in 2001

The people of Kutch and Bhuj were in for a shock on the 26th of January 2001 when children were celebrating republic day at schools.

The day turned to be a day of devastation when an earthquake of magnitude 7.7 struck the epicenter of Gujarat and shook the whole country with it.

The earthquake was so powerful that it took away the lives of almost 14,000 people and injured almost 1,67,00 people.

Many were seriously injured, some crippled for a lifetime, and some managed to escape under the debris. As many as 4,00,000 homes and buildings were brought down during the major earthquake that shook the Kutch district and brought the entire region into ruins in no time.

Many important centers of historical significance were broken down and people were shattered among the debris. People were left homeless, and they had to be rehabilitated properly.

The entire region was re-built by the government under special provisions taken up by the Gujarat government. Help poured from various points, including The Red Cross society, CARE international, Help Age India, World Health organization etc.

Families lost their dear ones, many lives were lost, homes came down and turned into rubbles in no minute, many government buildings were turned into makeshift hospitals, the city hospital came under total demolition, the entire district of Kutch and Bhuj saw the most unexpected times of their life.

It took them many more years to recover from the loss created in 2001, but the beauty of the land could never be restored back to its original beauty.

With help from the government, roads and infrastructure planning was monitored and built, city planning and reconstruction measures were recounted, monetary help from international funds were sought after and the region was revived again.

Natural calamities happen in the most unexpected ways and when they happen in such a large scale manner, they take away the entire city by storm.

Many hands worked together to shape the lives of people and to give them an ounce of shelter and basic facilities.