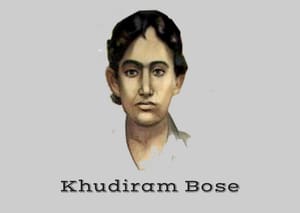 Khudiram Bose was one of many Radical nationalists that surfaced during the Indian freedom struggle as a result of tremendous disillusionment of the non-violent armchair politicians and moderate nationals.

He took to violence for the furtherance of a good cause and is remembered even today for his acts of valour and his sacrifices for the nation.

Khudiram was born in the village of Mohoboni at Keshpur Block in Paschim Midnapore district of West Bengal on 3rd December 1889 and was one of the youngest revolutionaries in the Indian freedom struggle.

His mind was moulded to do what he is known for today at a very young and impressionable age by the speeches and public meetings of Sri Aurbindo and Sister Nivedita at Midnapore during 1902 and 1903.

He was a member of student committees that were fired up in the Indian revolutionary movement. All they had was tremendous hatred for the British and blinding love for their motherland.

From the tender age of sixteen, Khudiram learnt bomb-making and planting and also carried out several bombing of police stations and government offices.

It was not until the Muzaffarpur bombings that Khudiram Bose rose to the limelight. A senior revolutionary of the time, Barindra Kumar Ghosh planned a coupe to bomb the former magistrate of Calcutta Presidency, Kingsford. Kingsford was an extremely ruthless tyrant and was infamous for passing judgments of capital punishment for minor misdemeanors of Indians. Ghosh chose Khudiram Bose and Prafulla Chaki to carry out the plan.

Accordingly, both Khudiram and Chaki went to Bihar disguised with different name. Khudiram kept a watch on Kingsford’s daily activities and the times when he came out of home, went to court, club, etc. Noticing all this, he planned to carry out the operation on the evening of April 30th.

He waited for Kingsford’s carriage at the front gate of the European club. At around thirty minutes past eight, he initiated his plan. The situation was tense and the air was heavy. Khudiram quickly threw a bomb at the carriage and successfully blew it, while still holding a revolver in his hand for handling unforeseen incidents.

Moments later, Khudiram realized that the carriage was not occupied by Kingsford. Instead, the wife and daughter of barrister Kennedy were killed in the carriage. Although he felt tremendous remorse, quickly, coming back to his senses, he fled from the spot.

The news had spread like wildfire and by late night, every train station and police station had been informed of it. They were on red alert to find someone suspicious in and around the station. Fearing confrontation with police in trains, Khudiram decided to run by foot.

He covered a distance of almost 25 miles that night. A completely exhausted Khudiram finally on reaching the station, he went to a tea stall and asked for water. Seeing his shabby attire and exhausted countenance, the nearby guards were alerted and confronted Khudiram.

After some questioning, Khudiram panicked and engaged in a scuffle with the police. During this, one of his revolvers fell down and further search revealed railmaps, thirty seven bullets, thirty rupees cash and hand drawn itineraries. Immediately, the young Khudiram was taken into custody.

Prafulla Chaki was also with Khudiram during the bombing and they went separate ways so that either one of them could be safe if the other is caught. He also had similar long walking journey after which he reached the house of an Indian national who was a civil servant in the British Government. Seeing Chaki, he immediately understood that he was one of the two assailants of the bombing.

He wanted to do as much as possible for him to contribute in the freedom struggle. SO, he took Chaki to his home and gave him fresh clothes, food, and some cash for travel expenses. Chaki then boarded a train from Mokamaghat which was bound for Howrah.

While in the train, he met a fellow passenger, Nandalal Bose. Nandalal was a policeman and unaware of this fact, Prafulla carried on his conversation with him. In the course of the conversation, Nandalal found out that Prafulla was involved in the Muzaffarpur bombings.

Immediately, at the next station, he informed the police through telegram. Then he came with a troop of policemen towards Prafulla. Prafulla tried to shoot him but was not successful. In order to escape execution at British hands, he decided to honorable die by shooting himself in the head.

The Muzaffarpur Trial for Khudiram

Meanwhile, during Khudiram’s trial, he was unaware of his partner’s death and took all the blame himself in order to save Prafulla. However, later, his defense lawyers convinced him to change the statement and not plead guilty because then he could be able to serve him later.

The trial of Khudiram was a lengthy one. His defense lawyer Narendrakumar Basu had made all technical points and had proved that Khudiram could not have thrown the bomb and that he be given the benefit of doubt and spared death sentence. However, the British government was more scared than in a state to follow rules and Khudiram was awarded death sentence.

Hearing it Khudiram simply gave a clean smile and acted with humor. He was fully prepared for death. Later however he appealed to overturn his death sentence as he could serve his nation better alive than dead. But all the pleas fell on deaf ears.

His fate was sealed the night he was caught. The Britons could not risk a revolution.He was finally executed by handing on the morning of 11th August, 1908 at 6 a.m. It is said that he was seen smiling while the cap was drawn to his face before being hanged.

Khudiram, with his acts of valour also created a huge uproar abroad where people know him to be the fearless Indian. The activities of Khudiram Bose as well as his fellow revolutionaries in a period where there was no mass struggle, helped in making the people aware of the self-sacrifice and courage required in the struggle for independence.

Taking their exemplary dedication to their motherland, we should imbibe this enthusiasm and do our bit for the country so that India can shine in its full glory as the ‘Golden Bird’ that I was once known as.