Known as the world’s largest floating Island the Keibul Lamjao National Park is a unique place. The flora in this Park will sometimes surprise you with their beautiful colours and their generous numbers in which they are found here. The entire place is a floating Biomass surrounded by stunning water bodies like the Loktak Lake.

The Park is situated in Bishnupur district in the state of Manipur in India and it covers around 40 square kilometres of area. There are the compost plant materials which float on the water bodies forming a circular ring like structure called phumdis. There are many species of endangered animal in the park which are marked as of special importance for conservation by the international Union for Conservation of Nature. 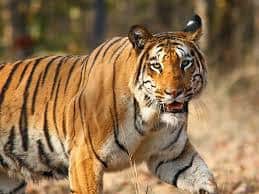 The Keibul Lamjao National Park is mainly as for MP area with floating mass and vegetation which were created by the collection of organic garbage and Biomass mixed with soil materials and thickened to form patterns.

There is also a water way which crosses the park that provides perennial access by Bose which cell through the Loktak Lake to the Pabot hill in the north.

There are mainly three Hills which are covered by the Keibul Lamjao National Park. They are Pabot, Toya, and Chingjao.

This not only provides an aerial and scenic beauty of the lake but also forms the natural habitat for the plethora of fauna found here. One of the distinguishing features of the park is that it is “too deep to be mass but too shallow to be lake”.

The outskirts of the path is privately owned but the park as a whole is state owned and the areas remaining are divided between the tribal groups who have been living here since time immemorial.


The climatic condition prevailing here has a vast range of temperatures ranging from 34.4 degree Celsius in summer to as low as 1.7 degree Celsius in winter. This Park also gets enough rainfall during the rainy season and has a recorded maximum humidity of 81%, the lowest being 49% in March.

The above listed Flora had been recorded in floating as well as sinking phumdis. Vegetation also closed on the floating decomposed vegetation which includes reeds, grasses and other plans. While the sinking phumdi has vegetation which have sunk to the bottom of the lake. However the three Hills surrounding the park are now denuded of most of the vegetation.

The fauna of the area also present a pandora’s box of different species. There are brow antlered deers also known as the sangai which is one of the principal highlights of the park. Other mammals found here include Hog deer, Wild Boar, large Indian civet, Fox, Jungle cat, Golden Cat, bamboo rat, flying Fox, sambar and many more.


Since modernization man has been tirelessly putting efforts in order to exploit the nature for his own advantage. We have not left the animals too. Endangered species are hunted as well as smuggled from the nation to abroad just for the purpose of earning money.

Because the area is a marshy land, the water quality has been deteriorating as supported by the corresponding pH values. The reason for poor quality is usually because of the pollutants from the towns joining into the lake, the excessive and indiscriminate use of chemical fertilizers and pesticides in the surrounding land area, accumulation of water, forestation which further causes soil erosion and routing of vegetation due to marshy land.

There are other threats too which include permanent flooding because of the thickness of the phumdis which is the result of the Ithai Barrage under the Loktak Multipurpose project.

The hydroelectric power plants constructed on the lake cause back flow of water from the Khordak River and discharge from other lakes and streams with settle down on the lake bed during the dry season.

The Loktak Lake of the National Park has provided for the subsistence of the local people giving them fish vegetation fruits etc. These also generate a small amount of revenue for the local people. Environment inning permanently high levels of water for belly ache will negatively affect the interests of the people of the area.

There are also boating options around to take a look at the flora and fauna of the park. The place also has quite a few trekking trails worth the time and effort for the beautiful landscapes.

In order to protect the lake and the Keibul Lamjao national park the government has taken many initiatives. High places have been made for saving the animals in times of floods. The theft of the valuable Timber and firewood food and fodder has been completely stopped.

Eco tourism has been increased as well as General awareness is being increased. The forest department has also taken several steps in conjunction with the Manipur government which include: Construction of fence border of the more important parts of the path to prevent the human exploitation.

Various checkpoints have been made at the most important places of the lake and the park for the purpose of enhanced security.


In the month of spring for six days, locals celebrate the YaoTsang festival where you can witness many events as the city comes out in full celebration. This is also the time we can wines the various delicacies here. The park also has many shopping options that we can explore throughout our trips.

The Keibul Lamjao National Park is stunning place with some rare species of flora and fauna.