Kakatiya dynasty was set up at Warangal in the eleventh century. They were succeeded by the rulers of the chaulakyas. Many of the important rulers of the kakatiyas were Prola I, Prola II, Rudra Dev, Mahadeva, Ganapathi Deva and Prataparudra. These rulers were the ones who helped in the upbringing of this dynasty.

They were established by a feudatory of the Eastern Chulakyas who declared their independence. He had a son called Prola I who helped in the shaping of this dynasty. Their capital was Orugallu which was also known as Warangal. The language spoken here is Telegu.

The religion adopted by this dynasty was Hinduism. It was established in 1163 and died off into oblivion in 1323. The rule of kakatiya dynasty is considered to be the golden area in the history of Telegu and Andhra Pradesh.

The supreme king among all the Kakatiyas was Ganapati. Something confusing happened in the rule after Ganapati as he didn’t have any son and his daughter Rudramba ruled after him. The first dynasty king of the kakatiya dynasty was Prola II who expanded the dynasty till far south.

After that his son Rudra ruled. He was also very well known ruler of Kakatiya Dynasty. Rudra expanded the empire up north till the Godavari delta. In his long reign his rule also faced the invasions of the Yadavs of Devanagri. Rudra’s successor was Mahadeva who expanded the empire till the coastal areas.

Mahadeva’s son was Ganapati who further expanded the kingdom till the coastal regions. Ganapati played a huge role in the establishment of the Kakatiya dynasty. He was the one who patronized the promotion of trade and commerce. Ganapati had a daughter named Rudramba and she ruled the kingdom after the demise of her father. She was a fierce warrior. 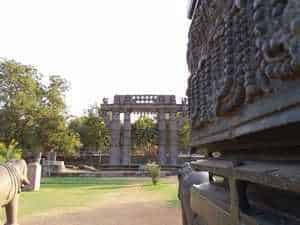 She fought bravely against the invasions of Cholas and Yadavs. Actually, the Cholas and Yadavs saw the female ruler as an opportunity to defeat them in their vulnerable state. But what they didn’t know was that Rudramba was very powerful and she would not stop at anything to get what was her back.

She even crushed the nobles who refused to be ruled by a women leader. Rudramba’s son Prataparudra ruled the kingdom after his mother. The ruler of Delhi sultanate Al-au-din-Khalji sent his army to conquer the Kakatiya Dynasty. This was the first Muslim invasion into this powerful kingdom.

The kakatiya dynasty came to an end by the hands of Ghiaz-ud-din tughlaq, the ruler of the Tughlaq dynasty who defeated Prataparuydra and after that Prataparudra was captured and made a prisoner.

Among all the rulers of the Kakatiya dynasty Prataparudra had a great hand at writing and liked to write poems, fictions and articles.

They were dedicated devotees to Lord Shiva and walked on the path prescribed by Lord Shiva for a good and beautiful life. When we see the name of the rulers, we see an uncanny resemblance in the names given to the rulers like for example the name of one ruler was Mahadev and his son was Ganapati is simply astonishing.

This temple was dedicated to shiva, Vishnu and Surya. This was built by king Rudramba and the art work of the temple is similar to the Ramappa temple. The beautiful and magic Ramappa Temple was also built by the Kakatiyas,. It stands as a glorious testimony to the legacy they left behind. An inscription on the temple is aid to be from 1213 AD. It is also said that it took about 40 years to complete the temple.

The temple is star shape in structure. There is also a very famous monument built by the Kakatiyas dynasty known as the Nandi Pavilion which has a huge bull made up of granite which stands in the middle of the monument. It has many beautiful entrances with many slabs which are used for screens and windows.

This compass is a very good example of the technology which was present in the old times. The design of these gates is called ‘foranas’ just like the stupas at Sanchi. ‘Foranas’ are actually engravings of flowers and other designs. They are embedded in the surface of that place.

Also, it was under the Kakatiyas that the Telugu language rose to it’s full fame. Instead of the Kannada language which was used to record inscriptions, Telugu language came to be used under their rule. Ganapati deva was successful in bringing the major telugu spaeaking lands under his rule.

Marco polo, the traveller known his works and anecdotes is said to have visited the Kakatiya dynasty, somewhere under the rule of Rudrambadevi. He made note of her administrative policies and procedures. To say, he was impressed would be an understatement.

The best part of the caste system under the kakatiya rule was that it was not as if the rulers supported some group more than others. Caste system was not of much significance. Any person could take up any profession he wanted to, irrespective of his religion.

The Kakatiya dynasty was one of the most powerful and long living dynasties in the south. It’s presence and hold in the south region of India is undebatable.

If the pages of history are turned up, we will notice that the Kakatiya dynasty was the only dynasty which had such a powerful hold in the south.