Jainism is a religion of self-help. Jainism is an ancient religion that believes in Liberation, humanity, harmlessness and unionization. Jains also believe in reincarnation, that is, Aatma never dies.. It lives for several years and takes many births until attainment of Moksh.

Liberation deals mainly with soul and to restrict the bad karmas of present and the past lives taken on this earth. Jainism also focuses to help the human beings and not on gods and any spiritual soul. The supreme principle of Jain living is non-violence and a right to live and let others to live.

Jainism do not have any single founder. The Agamas are told by the teerthankars. Teerthankars aare the 0teachers that shows the way to others. There are generally 24 teerthankars that are being praised by jains. 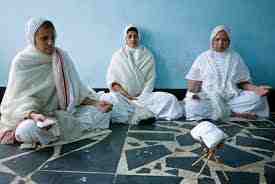 The Jainism became famous after the death of Mahaveer Bhagwan and was popular in the period of Chandragupta Maurya. Mahaveer Swami used to say, “Jiyo Aur Jeene Do” and there is one more popular slogan in Jainism that is “Ahinsa Parmo Dharam” and these teachings of Mahavira Swami are known as Agamas.

According to Census 2001, there are around 4.2 millions of jains in India.

Jainism is fully based on professional people like Monks and Nuns. These people take samathi that would not do marriage in their whole life and this vrath is known as “Brahmacharya Vrath”

There are many mantras used by Jain people to memorize the Agamas like the Navkaar Mantra which is considered as the strongest mantra in Jain community. Also the Bhaktambar Strotra is very popular in Jains and is available in two languages Hindi and Sanskrit.

There are some common Mantras in Jainism that are as follows

Jains believes that animals and birds are also having the living soul and should not be kept in caves and should be treated with respect.

Another very important thing about Jains is the fasting. It is very common in Jain spirituality. The monsoon season is considered as the time of Jain’s festival. This festival goes along with the Ganesh Chaturthi. Generally, fasting is done by women rather than men.it is assumed that fasting purifies the blood, mind and soul.

It is not only to fast and not to eat but if you are not eating and thinking about food than the fast is pointless and no need to do fasting. There are majorly four types of fasting in Jains

Fasting in Jains is the most common activity. Today many of the saints do fasting for more than a month. There is one position in Jains where Jains stop eating intentionally because they are preparing for death.

This is different from suicide as these steps are taken in anger but Jains do this type of fasting when the body is no longer capable to handle spirituality. This process of fasting is known as Sanlekhna and is commonly known as Santhara.

As the time passed away, many of the many of the Agamas of Mahaveera were forgotten and were misremembered by the people and the two groups were made of one religion. The two groups were the Digambers and Swehtambar and this difference is still there because there perceptions are changed.

Even though some steps were taken by Jains to preserve the text of the Agamas through religious books which are used by every Jain like Jinvani, Samaysaar, Padampuraan and many others to secure the belongings of the God.