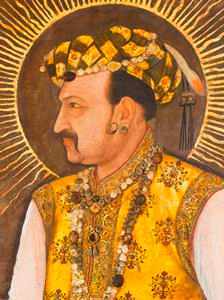 Jahangir is known as one of the greatest Indian Emperors. He was the fourth Mughal emperor. He was famous because he loved fine arts immensely.

His reign was from the year 1605 to 1627, that is, for twenty two years. Jahangir was trained from a small age so that he could get the succession.

His father, the Mughal Emperor Akbar hired best teachers to train him in the military and civil administration. But later Jahangir could not be patient to get the succession and he went against his father.

This hampered the relation between him and his father Akbar. It became worse when he poisoned his own father and finally got the throne.

After he became the emperor, he showed that he was an excellent administrator as during his reign there was economic growth and political stability.

Jahangir was born in Fatehpur Sikri in the year 1569 on 31st August. His parents were Akbar who was the Mughal Emperor and Mariam-uz—Zumani Begum. Jahangir’s mother was a Rajput and her other name was Jodha Bai.

This is why he became Akbar’s successor very early. Akbar tried his level best that Jahangir got the best education from the best tutors.

Jahangir loved to compose verses. He studied Arithmetic, History, Geography and also learnt Hindi, Persian, Arabic and Turki. Apart from these, he also received training in military and civil administration.

In the year 1581, when Kabul expedition took place he was given the responsibility to take charge of the regiment of the troops. After four years he got promotion and he became an army officer.

He married a widow in 1611. Her name was Mehr-Un-Nisa (Nur Jahan). She was a very famous and powerful woman.

She was the widow of Sher Afgan who was rebel officer of the Mughals. As she was a powerful woman, she helped Jahangir during his reign. He did not take any decision without consulting her.

During the mid seventeenth century, Emperor Jahangir’s health deteriorated and he went back to Lahore. When he was returning to Lahore from Kashmir, he died on the way near Bhimbhar on November 8th in the year 1627.

He died at the age of fifty eight. After his death, Jahangir’s third son whose name was Prince Khurram took the title of Shah Jahan. Jahangir’s wife Nur Jahan made a tomb over his grave.

It is believed that Jahangir poisoned his own father because he was impatient to get the succession.

After Akbar died, He took over the throne and got the title of Nur-ud-din Muhammad Jahangir Badshah Ghazi in the year 1605 on 3rd November. When Jahangir got the throne, the political conditions were not so good.

He had many other competitors for the throne. Even his son Prince Khusrau Mirza was contending against him. But Jahangir defeated his son in 1606 and he was confined in the Agra fort. He was blinded as a form of punishment.

Jahangir still followed many policies of his father. For example, Jahangir focused on military campaigns so that he could bring more territories under the Mughal rule.

In the year 1614 he was able to end the war which was going on with Rajput principality of Mewar. In 1622 Jahangir sent Khurram to fight against the forces of Golconda, Ahmedabad and Bijapur.

These three places had combined forces. But he won against their combined forces .After his victory, there were conflicts between Khurram and Jahangir.

He challenged Jahangir for the throne. But Jahangir got back his power by defeating his son, Khurram. Jahangir was keenly interested in arts and culture.

When he was in power he encouraged all the painters and artists for their work. It is said that Jahangir played an important role in bringing development to the Mughal culture and arts.

He even patronized Persian and European arts. Jahangir till today is known for his architectural works.

Jahangir had great concern for his citizens. He worked for their welfare. This is why he made the popular golden “chain of justice”.

He promoted efficiency in the administration. Just like there was religious tolerance when Akbar was in power, it was the same during Jahangir’s reign as well.

But lately, the relations between the Mughals and Sikhs were not good. At that time Arjan Dev was the head of the Sikh community.

When Jahangir was in power, his policies and decisions were never affected by the religious ideas. This was same even when Akbar was in power. Jahangir followed the tolerant and wise policy of his father for the non-Muslim subjects.

He even followed his other policies both in the northern and southern parts of India. He was able to finish the conquest of Mewar.

When Akbar was in power, he had already attacked there. Later in the year 1615 Mewar’s Rana had no other option but submit to Jahangir.

Rana and Jahangir had come to form treaty and according to the policies of the treaty, He had to provide a group of cavalry to the emperor.

This policy was followed by Jahangir even for the Afghan rebels who were present in Bengal at that point of time.

Apart from this he also made the eastern province ready for the future. Jahangir maintained direct relations between the Government of the Mughals and the East India Company.

Jahangir became popular because he made the golden “chain of justice” even outside the castle. This chain was connected to a few bells.

These bells would ring when someone came to talk to the emperor. This was a link between the emperor and his citizens.

This chain was a benefit for people who were in grief. They could easily summon the emperor. One can see Jahangir being portrayed in various television serials and movies.

Jahangir loved art and painting. This is why he encouraged all the painters and artists. Jahangir could easily find out who painted a picture by just looking it.

He contributed more in painting than in architecture. One of his remarkable architecture is the tomb of Akbar at Sikandra.

He even guided in the construction of a big mosque in Lahore. During the rule of Jahangir, there was a great progress in painting.

But apart from all these Jahangir was interested in making fine gardens. He ordered to make many beautiful gardens in Lahore and Kashmir. He even tried to make amazing calligraphic designs in the currency.

He had a great taste in case of dress. He used to design new things and introduced new fashion but did not allow other people to use them.

He loved fine fruits and considered mangoes to be the best of the fruits. He even liked the delicious cherries from Kabul.

Jahangir had all the qualities of a good soldier. He was equally talented in sport and he had great skills in shooting with rifles, bow and arrow.

Jahangir had a friendly personality but was a complex person. He was known among the people for being a successful ruler but was brutal as well.

He had addiction for women, alcohol and opium. People criticized him because he gave his wife Nur many powers in the imperial court.

But most importantly he respected his mother and other elders in the family.

He went against his father and rebelled against him because his selfish companions forced him to do so. But when he got the throne he realized his foolish mistake and made compensation for it.

When Jahangir came to the throne Ruqaiya Begum and Salima Sultan Begum supported him. They were the elderly women from his family.

After Akbar died, he remembered him and all the memories spent with him. Very often, Jahangir would go to Akbar’s tomb at Sikandra and rub his forehead at its entrance.

He had many wives but he was greatly devoted to Nur Jahan. This could be seen because he always consulted her on any matter.

He always worked for the welfare, interest and success of all his subjects. Anyone who worked under him considered him as a good friend.