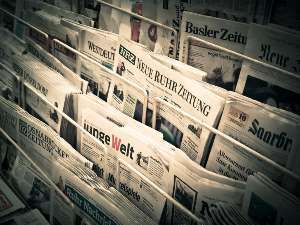 How would your day go if no newspaper was dropped at your doorstep every morning? To some it would be as if the day had not begun, and nothing else was worth doing for the next twenty-four hours.

To many adults, a cup of tea in the morning loses some of its flavor if there is no newspaper to go along with it.

Fortunately, the rapid spread of education all over the world has created a large reading public who eagerly await their morning paper. Indeed, the newspapers have become such an integral part of our lives that we just cannot do without it.

It not only gives us information about the most recent happenings in and around the country and the world, but also provides us with a whole lot of other features that we are grown so used to knowing about.

The press has enormous power in shaping public opinion and influencing values.  A clean, truthful, free and fearless newspaper can do enormous good by helping people to think rightly and impartially on important social and political issues.

There is no doubt that Television and the computer too provide us with news. However, an account of the same news in a newspaper is more graphic and detailed.

Newspapers possess other features too, such as editorials, middles, sports columns, business page and, of course, classified ads. All these features make the newspaper an invaluable friend.

Many newspapers now provide supplements that are entirely devoted to local news and articles of general interests. Without these sections, the newspaper seems very incomplete indeed.

Reading the newspaper also improves one’s language and vocabulary. This is a very important aspect of the newspaper.

Besides being a source of information and entertainment, the newspaper gives us something to think about and relieves us of some of the stress of our interest lives.

Thus the newspaper is a very important part of our lives and something that we definitely couldn’t do without on a daily basis.

Provide essential information which includes many section such as education, entertainment, sports, domestic and international news, health and beauty, etc.

Lots of advertisements which are given in the newspaper.

Basically newspaper aware us about what is happening in the world.

Reading newspaper is most useful for those whose want to improve reading skills. Just by reading the general knowledge will increase also your reading skills.

It is world of technology, we can to find news on internet, but we still rely on newspaper. Whether it is a child, adult or older citizen everybody likes newspaper to read.

Whenever we go to any place, and suppose there is long waiting line, then we automatically search for newspaper so we can pass our time

Newspaper has become a basic need for us. It is a source of knowledge. There are several newspapers out in the market you can select as per your choice. Some of popular newspapers are

Newspaper is available in every language so there is no language barrier. Anyone can read the newspaper in their respective languages.

So there are numerous advantages of newspaper. It’s like handy tool of information.

Many of them give tribute to their loved ones through newspaper.

Do there is disadvantage of newspaper? The answer is Yes and No? Don’t be confused. As we all know that newspaper is source of medium of information.

But do all information is relevant? It depends upon which newspaper you are referring to gain information. There are several factors that affect newspaper quality.

If newspaper is not delivered on time to the customer than it is waste. Do we read old newspaper? No not at all.  News is like an event once it is over no one refer its.

The newspaper is one of the modem powerful mass advertisement media.Free, impartial press is the first sign of a healthy and welfare state. H.G. Wells regards the press as the very backbone of enlightened Citizenship. Robert Lynd describes the press as a teacher, reformer and a critic.

The leading articles of newspapers go a long way in forming public opinion and guiding the people during critical periods. The editorial also helps a lot in the forming of public opinion.

The press keeps the public in touch with the day to day political, socio-economic changes all over the world. It instructs the public as well as provides an opportunity for the expression of public Opinion.

The press is a social reformer. It affords a platform from which advocates of social reform can press their causes on public attention and people and communities who think they are unjustly treated, can air their grievances there.

The press exercises great political influence. It teaches the citizens their rights and responsibilities. It creates sound political opinion among the people. During war time it can serve as the messenger of peace.

The spread of education has created a very large reading public in every civilized land; and every educated person finds his newspaper a daily necessity.
As an efficient public educator, as a trenchant and impartial critic of public administration, of law and justice, as a social reformer, as a champion of freedom, equality and brotherhood, the press serves as the most important weapon of modem life in combating all forms of evils and injustices in our society.

Newspapers give in-depth, detailed news of the world. They bring the latest information, regarding the happenings of the world. Their coverage includes topics from different fields such as social, political, scientific, business, and cultural etc.

The invention of the printing press has made the task of publication easy. Now newspapers are printed very quickly. They are printed almost in all the languages and their number should run into millions.

Newspapers represent ordinary people. They are a store-house of knowledge. Newspaper make us broad-minded. They develop in us a universal spirit. The habit of reading them improves our language. They provide us information, regarding the market tends, sports, everyday happenings, business, foreign relations and political development.

Different segments of society are benefitted by newspapers. There are matrimonial columns for unmarried persons, and market prices of shares and commodities for the business minded.

But there is also a dark side to the newspaper. Some newspapers are partial to particular political parties. They do not show their real picture.  We must practice independent judgement, while reading a newspaper.