Importance of the Amazon Rainforest 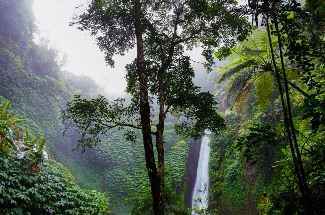 Trees are the means by which humans connect to nature at large.  A variety of trees packed together form what we call as a forest ecosystem.  Forest supports a huge variety of flora and fauna. Forests are not just pristine holiday or camping destinations. They are the balancer’s and regulators. It is because of the forest that earth supports life. We cannot imagine life if our forests are in bad condition.

The Amazon is also home to hundreds of endemic and endangered plant and animal species. Simply put they are most dense, supporting incredible biodiversity, having the largest river flowing through it. Covering over 5.5 million square km area it lies in South America continent.

It has been described as the “Lungs of our Planet” because it provides the essential environmental world service of continuously recycling carbon dioxide into oxygen. It is claimed to be responsible for producing 20% of world oxygen.

Due to its huge size and area coverage it holds major significance in the impact that forests have on our biosphere in total. It is a rainforest lying in the tropical region. Rainforest are tall, dense jungle with high amount of average rainfall.

They display huge diversity of vegetation due to climate and location. This region where Amazon Forest is present lies close to equator thus it gets ample amount of sunlight throughout the year and the forest has broad leaf plants mainly. So, plants are able to perform more photosynthesis and store great amount of energy from sun.

These trees provide food to animals of all kind, give shelter to many birds, reptiles and other animal species along with places for interaction. With the Amazon River flowing and covering 6,600 km, and containing hundreds of tributaries and smaller streams, it’s home to the largest number of freshwater fish species in the world.

This forest regulates climate, as precipitation depends on the process of transpiration by plants. The polluted wind is naturally purified by the forest along with participation in the water cycle. Moisture over Amazon forest affects the climate of nearby areas and impact the winds too.

Amazon forests are crucial for entire mankind. The outstanding biodiversity in the Amazon isn’t only important for the natural ecosystems, it also provides many benefits to us humans. It certainly gives timber for industrial use to modern world.

Apart from that too the variety of herbs and medicinal plants in the region used by local tribal can be used to treat many deadly diseases. They have high economic value as they act as reservoir of food, timber, medicine and rich mineral deposits too.

They are essential as they still host the most ancient society tribes of human in raw and untouched form. This puts forth chances of research to understand development and evolution of present day society. It presents a live example of adaptation by organism and mutual coexistence.

To rest of the world, it acts as a carbon sink and absorbs major pollutants released in the atmosphere by burning of fossil fuels in industries and by vehicles. In this way it prevents the level of global warming that may occur due to high amount of carbon dioxide and other greenhouse gases released in the air.

Indirectly they check the melting of polar glacier and in tandem the rise of sea levels. Thus, preventing the inundation or submergence of the little island nations far off from the forest.

This natural region is a grace as it prevents erosion (the trees bind the soil), also groundwater is uncontaminated, and piousness of region is still maintained in the interior region to great extent till date. The extreme dense jungle host lot of poisonous creatures from spiders to snakes are keeping a check on it’s easy deforestation.

But Amazon a self-regulating and environment benefiting ecosystem is too sensitive. As the whole system is integrated, and raw the effect of climate change is also seen on plants, vegetation and animals of this forest. Illegal mining, smuggling, poaching is threatening the equilibrium of this region.

Trees are being cut down for cattle grazing and cropping. This leaves indigenous wild and free dwellers homeless. Such animals either get extinct over few decades thus altering the food chain and prey-predator balance.  Or enter human settlements causing man-animal conflict.

People from cities wish for easy money and therefore exploit the forest. Outsiders pose threat to tribal population too. Colonial powers destroyed many tribes while ruling this region. Each time a Rainforest medicine man dies, it is as if a library has burned down.

When a medicine man dies without passing his arts on to the next generation, the tribe and the world loses thousands of years of irreplaceable knowledge about medicinal plants. The damage is not quantifiable in economic terms only. We lose a lot more than can be imagined.

Need of the hour is to develop healthy practice of sustainable development. As said by Gandhiji “Nature has enough for everyone’s need but not enough for everyone’s greed”. Trees have always been givers and collectively as forest they protect us from many unpredictable natural calamities.

The largest patch of forest is crucial for overall well-being of all organism. International organization and watchdogs like Rainforest Action Network, Union of Concerned Scientists and Greenpeace are active to save Amazon in particular.

Apart from that as citizens of planet earth each one of us too can contribute by living a minimalistic life, avoiding pollution and being vigilant towards forest crisis. Share a thought, talk more about it as earth is our shared heritage and so are its mighty and benevolent forest like Amazon.