Walk through a graveyard in the dead of night alone. Try not to scare the hell out of the heavy sleepers in coffins. They are all just trying to nap. After all, they are going to wake up from slumber and cause havoc in the human world. This very thought will scare you.

Leaves rushing, wind brushing your tense muscles, eerie noises everywhere. You think you are being followed but when you turn to see if anyone is there, you do not find anyone. Time runs out. Your pace picks speed. You try to navigate your way through various coffins. But you are too slow for me. You don`t realize but then it hits you hard. I am your doom.

Your doom is running behind you and you have nowhere to escape. With a single strike of blow, I take you down. Fear clouds your eyes and pleads escape your mouth.

But you are unable to voice your fears. I ravishingly look at my victim lying in front of me. I feast on your fears. It gives me immense satisfaction. I satiate my ego on your pleads of mercy. But I am the end. I am the monster people fear talking about.

I am the demon you tell your children stories of `The Walking dead` straight out of coffins. I am a Zombie and I don’t spare anyone. The scent of her A+ blood draws me to her in an enchanting way. I cannot resist this temperature. I latch onto her neck, sucking all blood out.

My tummy is full now since I just feasted on human blood. She is lying on the floor, writhing in pain. Didn`t she know it is unsafe for her to be at a place as dangerous as this? I feel bad for her due to the human alive in me but with time, I had learnt to suppress my human and bring out the cruel monster that I was.

Human world is a cruel world. Different zombies have different stories of how they were tortured and did not attain salvation. The pain inflicted on their soul had not found their redemption, their undoing; they all had suffered cruelties or tortures from their family, masters and friends.

Their souls were still alive in the thirst for revenge. They wanted vengeance just like me. I am trapped in this tortured soul. I just can’t seem to get rid of this tortured soul. I feel trapped. My suffering lies in the fact that I suffered all throughout my life and even death holds no peace for me. 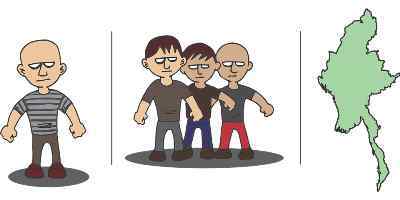 My life was happy with family and children. But all hell went loose when I saw my wife cheating on me with some other man. I felt ditched.

How could she do this to me? We had kids and here she was indulging in adultery. When she was caught in that compromising position with him, her lover immediately ran away even before I had a chance to kill him.

What was more surprising that she was not guilty of her act? She acted nonchalantly as if the entire fault was mine. She blamed me for being poor and not satiating her needs. How materialistic was she. We were poor but we were happy. I was devastated. I attempted suicide and now I am here. What is even worse is that I did not attain peace in death.

My misery only increased with unanswered questions eating my heart whenever her image cropped up. The guilt of leaving my own children was eating me. How could I do that to my own children? They were little kids and they won`t be able to deal with their mother`s ignorance and meanness. God save them from her intentions.

I just once wanted to know what had happened to my family and how were they. I decided to use the next body which comes here. I will impersonate my soul in that body to reach my family as my curiosity was getting the best of me.

The next morning a man come to pay his dead wife respects but my wife didn’t once visit my resting place. In that moment I felt incomplete and ditched. It was overwhelming to see the love of the man for his wife.

I wanted to take his body but I promised myself to return his body to his soul or he would be here in this condition, like me, lamenting the loss of his wife. I snatched his body from his soul and trapped his soul in my coffin by virtue of my power.

I decided to impersonate as a relative from far end to meet my family. I clicked the door bell and reminisced the memories when I saw the place that I built with my own hands through years of hard work. A man unknown to me strides and opens the door. He asks me who I was and I explain him a fake story. He lets me in. I see my beautiful children, malnourished, sitting in the corner.

My heart splits in two when I see them. A wave of guilt washes over me. I feel immensely guilty for turning my backs to them. My ex-wife comes out laden in jewels and greets me. I keep a facade on and ask her about her husband i.e. me. She says that he is dead without any remorse.

I feel my heart twinge. But I ask her what had happened to him. She didn’t look me in the eye and said that he committed suicide. She then explained that the `new man’ was her new husband now. When she talked of him, she looked happy.

At least she found her happiness. I asked her about children but she remained tight lipped and didn’t divulge any details. I smelled something fishy. On closely looking at her, I saw marks of beatings. The children looked like they feared something. The `new man’ came back in. I caught that unearthly glint in his eyes. I realized that he used to beat them.

I decided to do something. I exchanged pleasantries and walked out. Hiding behind the window outside the house, I made a video exposing his wrongdoings and gave it to the police along with her address.

Then I was quick to make an escape to my home-graveyard. I exchanged the body again and returned the soul his body again. When he woke up, he seemed a bit confused but just went away. At least, I had my questions answered. My salvation was waiting. I would finally rest in peace knowing my family was safe.

I got freedom from my tortured soul and that was the first night I slept in peace after so many sleepless nights.