The word wizard rings a bell in your mind. Doesn’t it? The mystical world of fairies and magic seems so fascinating to the common man. This is the reason that the series of Harry Potter was an absolute hit with the audiences. They just wanted to get lost in the world of Harry Potter and Voldemort.

The concept of wizards originated way back when the human appeared on earth and had developed belief in some superstitious powers. They might call them by different names.

Like someone called those with supernatural powers as God, Bhagwan, Wizard, Sorcerer etc. But all of them are linked to different usages of the powers. No wonder, all of them had some magical powers but how they gained those powers and how they use those powers is all that matters.

Wizards have become an important part of our folklores. They have trickled down in our legacy and have become a part of all the tails we hear from our grandparents and elders. Some wizards used their magical powers to cause havoc and unrest in human beings and some of them helped mankind. 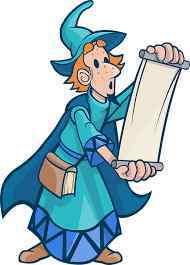 If I were to ever become a wizard, I would love to go by the name of ‘Kiara’. My magic spell would be as follows “Hocus Pocus pooh booo……. Kiara Kiara would love to….” And magic! It would be amazing to become a sorceress myself. The sorceress about whom I have only read about in comics, books or seen on television; it would be an amazing feeling to become one myself.

This world is already full of cruelties and in this place I would love to become a bright ray of hope and goodness for all the people in this world. I would try to undo the wrong done by human beings to their surroundings.

There are many living beings that require somebody’s help to alleviate them from their distressed state but their cries of pleas go unheard. Humans have become so insensitive to their environment and their own brothers that they are not able to sense their own brother’s mysery.

But I would make sure to camouflage in my human body so that I don’t scare the crap out of the people who see me. This would ensure that I continue with my real life and people don’t tag me abnormal. It would enable me to understand their problems at ground level and help them.

A small help done goes a long way in adding to your points of good karma. I am a firm believer in karma. I feel that whatever you give comes back around, good or bad. Life is like an echo on a mountain. When you scream your heart out to mountains, the mountains echo your voice back. Similarly we should make sure to give well to the society and not hurt anybody.

As wizards, I would first like to bring a mental revolution in the minds of people. Because without a change in mindsets nothing is possible. Our nature is screaming for us to help her. She is being exploited at an unprecedented rate. Understand her sorrow. Understand her pain. Understand the state in which she is passing her days. Oh human! Don’t you realize the wrong you are doing to her.

Does your conscience not hurt thinking about your own mother being hurt by your reckless actions? If your soul does not speak to you, mine does. I will stop you from exploiting my mother. I will do everything in my power to stop the exploitation of nature. Sustainable development is a much better alternative to satiating the needs of the nature and the human as well. But who follows it? Nobody.

I am a feminist at heart. But I am against sexual harassment of both men and women. Yeah! The sexual harassment of men is not talked about but that does not mean that they are not facing such exploitation at home and at work. I will try to help all these victims and play vigil to the occurrences of such incidents so that they can be stopped well in time.

I also want an end to drug menace and over influence of alcohol. Both these things have turned youth haywire. They have lost their path and have deviated from the path of progress. To bring them back to normal life. I will use my magical powers and counsel them on how to live life in the society again.

I also want to extend an arm of help to those people who are living their lives in oblivion. For example the aged people. The old ones do not deserve to be desserts by their own kids at such an advanced stage of life. They should be showered with love and care.

Donations to NGOs are one thing but going there and showing your love and care for them is another. It fills the voids in their hearts and fills their hearts with happiness. Don’t just go to an orphanage to donate money or goods to the children.

There are many people who are doing that but there are not many people who are giving them their love and affection. Talk to them, spend time with them, and play with them. This will fill their hearts with love. These people are devoid of love all their life. So never ever should one hesitate to extend an arm of love and care towards them?

A life lived without helping others is a life lived in vain. Humans will have to buckle up and instill humanity in their hearts. I won’t be there at all times to help people.

This need for helping people has arisen because their own friends and brothers have turned their backs to them. I am mortal. I may be a wizard but I don’t want an immortal life for myself. Because the sphere of life is a web of lies. I want salvation to get rid of this tortured soul of mine.