Essay on If I were a Pencil 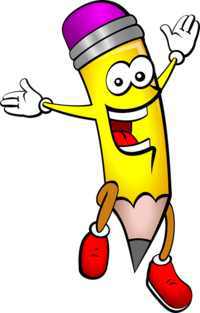 When a child first begins to write, the first thing that he naturally reaches out to is a pencil. Young toddlers being to scribble, learn to write alphabets and numbers first thing with their pencils.

Pens are introduced to children much later in life.

The reason why pencils are first given as writing tools is because children at their learning stages of life have a natural tendency to make mistakes and these mistakes can be rectified with the help of an eraser.

So we see, a pencil and an eraser is the first combination handed over to a child when he is a toddler to enable him to learn correctly and learn from his/her mistakes.

Pencils are made of graphite. Nowadays we have a huge range of pencils, right from the simpler ones to the fanciest ones available in the market.

The cost of a pencil depends on the range of its attractiveness and appeal. Simple pencils are first introduced to small children as they are generally harmless and children do have a tendency to put things into their mouth.

The very famous story about the invention of rocket specific pens finally reveals a magical concept at the end.

When scientists were working on inventing a pen that could be used in spacecrafts and rockets, a genius pointed out to the use of pencils in place of pens.

It was the most common usage of common sense that had created an uncommon scenario.

Coming back to where we started from, let us now explore the various possibilities if we were to imagine ourselves as a pencil.

If I was a pencil myself, I would do all possible things that a pencil does, but fill it up with positivity, optimism, love, care, affection and a lot of good influence on others.

We generally use pencils to draw, sketch, write or for craft ideas.

As a pencil, if I was allowed to draw and sketch, I would draw plenty of trees and plants to show my care for nature. I would inspire others to build greenery around their places and neighborhood.

I would draw cute pictures of animals seeking love and affection from humans. I would draw their innocent and humble faces to inspire humans to show care and concern. I would draw great and magnificent creatures to depict grandeur.

I would draw the Seven Wonders of the World to exemplify beautiful architecture in the world. I would treat everyone’s eyes to royal palaces and heritage buildings that have inbuilt engineering masterpieces of yesteryear’s.

With color pencils, I would create a colored version of all the images drawn to beautify and add life to them. On a  canvas of life, it is art that imitates life and therefore we ought to bring out the best in us.

By showing beautiful images and pictures handwritten to the world,  I would inspire people to think like me. I would encourage everyone to think in a nice and creative way, to beautify our thoughts and add color to our lives.

As a pencil, I will create my own destiny. I will lend a strong support to a budding author or a poet or a writer or a comedian who has set out to write his fortune. Whether he chooses to use me or a pen is a  matter of the writer’s choice.

Writing inspires people. People change the way they think by reading a good writing. If I am given the due credit for being chosen as the medium to write, what better advantage than this!

I would help the author write down some of the best quotes of his life, write the best masterpiece he has ever written.

I would choose to become the medium of a spiritual write-up, encouraging articles and thoughts about being positive and looking at the bright side of things in life.

I would like to motivate people with my writings,  I want to be the tool for a writer who is not biased.

I would choose to be with writers who are open minded, who are authors par excellence, who have their own signature styles, who don’t imitate others etc.

I am not just a writing tool.  I could also be used for fancy crafts. I would love to decorate and deck myself up with creativity unlimited.

I would like to present myself as a doll and entertain my little audience with my creativity. I would love to wrap myself with a sheet of crumbled floral paper and present as a doll in front of them.

They would all love to see me. I would like to attach myself with another pencil and build railway tracks. Children would love to see me in different ways.

I would love to increase their creative quotients when they look at me. They can build a house by placing more members upon me.

I would look graceful in plenty of other crafts. Above all,  I would love to see the laughter on their faces and that’s what makes me happy too.

Usually, when a writer writes an excellent book, the credit is undoubtedly shared to the author and for his rich and creative mind.

That is perfect in itself. But I do request for a certain share of credit as I was the very medium that was used for writing and expressing the writer’s ideas.

2 thoughts on “Essay on If I were a Pencil”