The world of magic creates interest and curiosity in all of us. We as human beings are inquisitive about what seems unnatural and a point of focus that is hidden from the rest of the world.

These hidden things in any magical act create curiosity and people would like to know how something unbelievable could pass in front of their eyes so easily and with so much of grace.

If I were a magician, I would use my magical skills to do everything that I wished for, but possibly couldn’t do because in reality, they may not happen.

I would first love to magically visit those destinations that I always preferred to go, but couldn’t. Scuba diving under the seas, snorkeling in the great barrier reefs, climbing high rise Alps, snow skating and skiing in the laps of the Himalayas etc.

I would also love to explore river rafting and other risky adventures magically, since in real life I may not have resorted to trying them, given the risks and pains associated with them.

Travelling has always been fun and experiences are always enriching, so if I am able to do it magically by going to whichever place I prefer to go and doing whatever adventures I like to, then being a magician would be a great experience. 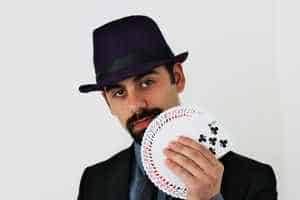 As a magician, I would magically plant new seedlings in places where trees have been cut down or felled to make place for concrete structures.

I would magically water them and nurture them till they are big enough to support themselves. I would also place barricades to maintain the green cover of the roads and prevent them from being spoilt.

I would like to plant more flowering plants magically so that everyone has a pleasant smile and refreshing feel whenever they see them.

As a magician, I would act on the burning issue of the nation – corruption. Magically, I would work on installing scientific gadgets and help bring to bars those who are involved in the act.

If people are involved in corruption, there will be poor economic development. If I can magically catch hold of corrupt persons red-handed then they would be put under bars.

Usually magicians work on bringing a smile on people’s faces. I would be quite different in my ways. I would like to resolve burning issues of the nation.

I would use my magical powers to clean the bureaucracy. I would make the government offices more service oriented and favorable towards its citizens.

I would like to use my magic powers to do such things that would help people. I would revolutionize the situation in villages. I would magically send every other child to school and make sure, their futures are bright.

I would build more schools in place of existing but useless structures and buildings. I would magically dis guise myself as some other form to do things that cannot be achieved by plain means.

I would bring strict laws of the nation and if somebody did not follow them, I would magically enter their names in the register.

As a magician, I would eat and live in royal means for at least a day. Royal comforts are totally far off normal people.

So, to enjoy the benefits of such luxuries, I would turn out in the form of a magician and do those things that I wouldn’t possibly do otherwise.

I would enjoy royal treatment and royalty at every step and have rich experiences. I would stay at big mansions and costly apartments, huge bungalows and villas.

As a magician my biggest task would be to encourage people to be hardworking by nature. Generally the tendency of people is to not listen to words if told plainly.

Things that are hit on our ears are generally acted upon at a faster pace, so, I would magically do such things that push people from their comfort zones.

For example, if I spot a dirty road but see that people are disinterested to clean up the mess, I would push a garbage cart into the road and block traffic.

So people would naturally be pushed towards acting on essential tasks. In a similar manner, if I have to make them plant more trees, I have to first make them do the work in an indirect approach.

As a magician, I would stop people from eating unhealthy and junk food. Especially parents whose children eat junk food will be targeted first.

I would wait magically at schools for the lunch bell to go and then take away junk food items from whoever has bought it. This way I am supporting nutrition and healthy eating habits in children.

My aim is to have a clean and green city which I aim to achieve magically.

I also would like to magically instill a sense of time and promptness in people. In India, we usually have the tendency to adjust to whatever situation comes in front of us.

Whether it’s right or wrong, we tend to adjust ourselves to it and hardly raise any voice against it. That wouldn’t happen if I use my magical powers and change the front face of the system.

I will make people stick to deadlines; transportation should happen at correct times. Nobody should wait for more than the stipulated time. I will make the clock hands run faster and thereby force people to keep pace with it.

Last but not the least, I would like to magically end the bitterness that exists in people’s hearts and fill them with love and compassion. I would instill a sense of kindness towards fellow creatures in the society.

We are a globalized economy and as a magician I would work on bringing in communal harmony and respect for all cultures. I would try to instill all these values magically in people’s minds.