If I were a kite, I would live my life at my own will.  I would keep flying with my wings.  I would spend my life with fun, performing the responsibilities of human life.  Like human beings, I would have no desires nor home fight. I would roam free from everywhere.  There should be a life in which you have your freedom. It is very happy to live that life.

The fascination of the world, away from illusion, remains happy and touches the sky. If I were a flying kite, I would just fly and fly everywhere. I would not come down. I would just live in the sky and make my home there. There would be nobody to trouble me. Only birds would be my friend there. I would talk to them and play with them.

I want to go to different countries and meet people there. If I were a kite, my wish would be fulfilled. I have heard Eiffel tower is the tallest building in the world. If I were a flying kite, I would go to see Eiffel tower and touch its last point.

When after being a kite, I will see the earth from the sky, then the river, mountain, building everything will seem small. A beautiful scene will appear in front of my eye. That scene, I will never be able to forget. Everything will be like a dream. I know it was difficult for me to believe that it is real, not a dream. I know that time, I will pinch myself to make myself trust. Being a kite, seeing the whole world will be a dream for all. It is not easy to believe suddenly.

I know being a kite cannot be possible, but still, we can desire to be a kite. While writing on “If I were a flying kite,” I felt as if I am a kite, and I am flying in the open sky. I know it is not possible, but we can dream of being kites. It is not necessary that after being a kite, only then you can see the world. You can go anywhere and mind even being a human.

How beautiful it would be if we were able to fly. We would go to places. We would travel. We would fly. It feels so good to even think about it.

I love this idea. I would really wish and desire this thing to happen. It would be the best thing that would ever happen to me. It is like a wish.

It is not that it is my own personal thought. Every individual once in their life time thinks that he/she would fly. To get to the places and live the way we want would be amazing.

I would go to places of my choice. I have a dream to visit the city of Paris. I want to see the Eiffel tower. If I were a kite I would go flying to the city and see its beauty from the sky above.

I will have the glance of the entire city from above. I could enjoy the scenes of the city to the fullest.

I would travel to the hill stations. Hill stations are my favorite spots. They are wonderful and to be able to explore them from the summits of the sky would be so beautiful.

It would be like a dream come true. I would be able to touch the mountains. The mountains, how they touch the sky and look magnificent similarly I would fly near the mountains as a sky. This is the advantage of being a flying kite.

At times it even happens that because of the snow the vision becomes hazy. 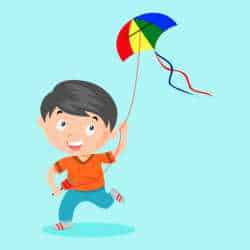 The view which is so beautiful is not visible to them. The vision which is so amazing cannot be seen by them.

The vision which is so captivating, they remain unaware of it.

The vision which is so heavenly, they are view less of that. This is the irony of being a human.

It is true that they have achieved various things. They have developed so many things.

They have made inventions and creations. But they have nothing to be in touch with the summits of the mountains.

They are not able to have its clear and clean vision. They are deprived of the true beauty. They cannot experience the bliss-full feeling.

All these things are not available in their world. But I am being a flying kite can do all the things. I can have all the visions.

I can see the beautiful snow peaks of the mountains. I can fly over them. I can feel the cold breeze. It would blow over me. It would startle me. It would mesmerize me.

It would fill me with chills. It would give me altogether a very different experience. I would fly around the mountains. I would see the birds flying along with me.

I will have all the pleasures of natural beauty. Human beings cannot have all these advantages.

Their things have limitations. After a certain point even, they are helpless. They do not have any measure to sort out the things.

Every human being wants to be free. They want their own space. They all have their thought process which is different from one- another.

They want to live in their desired way. But they are not able to enjoy the freedom completely. But a kite has all the merits. This is the beauty of a flying kite.

I can explore the day to day happenings of the city. I would see the soothing and serene atmosphere of a village. I would be able to fly there more easily. The air of village would be fresh.

The air would be free from the pollution. City is full of pollution.  The humans have to breathe in the polluted air. But I as a flying kite would easily travel to village and have fresh air.

The clouds would appear to be as image of different creatures. It would be so nice to touch the clouds. I would see the airplanes crossing by my side.

As a human I can only travel in the airplane. I can have the view of clouds from inside the airplane. But as a kite I can feel the clouds. I can touch them. I can fly through them.