Time is money and money is what matters the most in one’s life, at least now a days. Gone are days when people believed in saying money is not everything.

Other virtues like social service and charity should be given priority over the rest. The fast changing world has changed the values.  The entire school of thoughts have gone under renovation for the man kind.

Driven by monetary benefits, one weighs pros and cons of everything to decide further. One bribe even god to get their works done through him.

They make physical offering to him like I will distribute this much of sweets if he will fetch me promotion. They offer god if he will make perfect match for their daughter or son, they will organize Jagran’s etc.

Have you come across any incidence when someone has left their home behind to keep his father`s word? Do Any wife and younger brother leaves the comforts of life to escort husband or elder brother.

No, human values have deteriorated from bad to worse.

Every now and then comes to limelight the incidences of son killing parents for property. Brother nagging for parental assets distribution.

Wife hatches conspiracy against husband owing to extra marital affair. Neighbours quarrel with each other on pity issues of parking car without permission.

The reasons are endless but the motive behind all the misconduct is same. Not even a single person want that they should suffer even the slightest on account of anyone else.

Society has become more of a self-centred one and service motto is after far behind in the race.

Records has reference younger brother gave up crown of king for elder brother. He worked only as his administrator as long as elder brother didn’t arrive back to kingdom.

Gone are the days when the words of mouth of parents were command for children.

It was that era of truthfulness and brotherhood which made India named as golden bird. It was the prosperity and the feeling of sacrifice that govern the nation. It is now replaced by cunningness.

We often hear from our parents that blah blah thing use to be so cheap during their younger days.

Grandparents are often heard complaining that their grandchildren are so insensitive toward them. Kids now a day doesn’t think twice before speaking out words.

According to them the younger generation has less feelings. They are concerned about what gadgets they have, overlooking what are the needs of family. 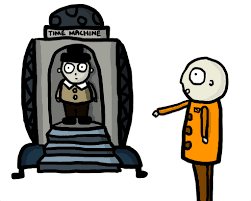 To have first-hand experience of how those days were, I wish to travel back in time.

I wish I could get back into the era of Ramayana or the Mahabharata whichever is grander.

I would like the era of lord Rama because he is being referred to as Yug Purush in our literature.

But Mahabharata Yug has characters with lot of remarkable virtues followed for.

If I could travel back in time I would like to go back in the era which was ruled by rulers and I myself being their Prince.

I wish if I could have been present during rein of Pandvas and Kauravas. Being one amongst Pandavas myself. I would have got the chance to meet Lord Krishna, who played a crucial role in the great battle of Mahabharata.

Lord Krishna has given the worldly knowledge and the directions to follow. They help them make the correct decisions when any one is in dilemma.

He laid emphasis on the fact that a person should keep on performing his/ her duties.

Karma should be without worrying of the material outcome from the same. The knowledge imparted by him, during the wartime, is in one of the most holy book of Hindus called as Bhagwat Gita.

In Hindu religion Bhagwat Gita has answers to all the queries related to human life, after death too. Since time immemorial man has reached to Moksha following the doctrine of karma.

I wish I could have met lord Krishna myself. He is the only Indian god who’s believed to have tales attached to his childhood. He was equally mischievous during his adolescence.

He is adorable miscreant of Indian household. Almost every Indian infant is given one or the other name of lord Krishna for the mischief they do.

By travelling time not only my earnest dream of meeting my disciple lord would have come true but.  I would have seen myself what grandeur comes to life with tag of prince attached.

Palaces to live-in. Horse riding, archery and elaborated lifestyle are essence of prince life. All this would have been at my disposal if I would have born or could have travelled time to that rein.

But with grandeur comes, war issues too as princes are a warrior. Learning archery as a sport is different from practicing it as a saviour.

Now that I am unable to change what’s in hand, I would sum up that it’s easy to dream of being what you are not. But difficult to live up what you are actually born as.  To quote Gita`s Gyan

Keep on doing your karma; your destiny will follow you. What meant for you will come up to you. It will not pass by you. Forget about what will you gain.

Focus on today, forget the past. Past is yesterday and future is unpredictable. It is only today which is live-able and manageable. Don’t give up hope because hope makes live life easier.

I won’t give up hope of being able to travel time someday, as new technologies emerge every day. I am crossing my fingers that some techno geek will invent time machine.

It will help me to travel back to Mahabharata era for a while and bring me back in my present life too.

Though past fascinate for its lavish and king-size life style yet my inclination is only toward this present-day world where life is much faster and easier with inventions of new machines like aeroplane rather than Vayu Yaans which were mode of transport in those days.