Sports are an important part of man’s overall development. Sports are an essential part of the curriculum in school, many students excel both in sports as well as academics and others take sports seriously to the next level and take part in many tournaments.

Sports persons are much disciplined in their approach, their commitment and discipline is applaud able. Sports should be considered as a career option and parents should encourage their children to take part in all kinds of sport activities conducted by their school.

Every person should develop liking for a particular kind of sport as this helps him to release all the stress and relax his mind.

These days, a sport is a compulsory subject in many schools and children are given the option to choose the sport of their choice and interest.

They are provided training from expert coaches who train them properly and guide them to attend many tournaments. This builds a strong competitive spirit in children and makes them strong.

Sports consist of both indoor and outdoor games. Outdoor games require lot of training in physical strength to handle physical pressures as per the requirement of the game.

Some of the popular outdoor sports are volleyball, basketball, athletics, hockey etc. Indoor games focus more on the mental abilities and provide some relief from heavy pressures on physical strength.

Examples are chess, squash, ice hockey, skating, etc. Ice hockey is played on a thick base of ice sheet. In some countries in the west, winter season ends up being so extreme, they are proud to play their winter sport activities altogether in a different way.

The summer sports vary from the winter sports and that has become the norm from many years since the changing weather conditions make it favorable for specific kind of sports at specific seasons.

All about Ice Hockey

Ice hockey is played on ice as the name suggests. It consists of two teams; team number may vary from a simple five member team to a big team of 20 players.

Near the border or rink of the field area is placed a net with a goal keeper to manage goals. Hockey sticks are used by skaters who can actually skate on ice. Such players are permitted to play this game.

They make use of a hockey stick to hit a hard rubber ball, popularly called a ‘puck’. Each of the team scores goals when they hit the puck into their opponent’s net. Ice hockey is popularly called the national winter game of Canada, particularly in Montreal.

The game dates back to as early as 17th century when European sportspersons played this game by skating on ice. Till this day, the game is popular in many of the cold countries of Europe and America along with Russia.

In our country, ice hockey is preferred more in the cold regions of Kashmir, Shimla and Ladakh where snowfall happens during winter season.

It is favorable at these places as the snowfall there makes people make use of the ice to play such sports. This game is known to be a fast paced game as skaters are known to move at very high speeds and these skaters hit the pick into an opponent’s net and score goals.

The goal tender tries his best to stop the puck from entering the goal. The ice skaters have to wear heavy clothing right from gloves, helmets, protective gear for the body and finally skates.

In olden days, this game was played with certain well laid out rules and that which was exclusive for the game alone.

Today, rules are laid out that matches with field hockey and people playing regular hockey in national hockey tournaments generally take part in this as well. Ice hockey is also a popular Olympic sport and both men and women play this game.

The entire sheet of ice is divided into three zones. The net areas on both the sides of the opponent groups facing each other.

Whenever a player hits a goal in the opponent team and the goal tender is unable to resist the puck, then such a shot is called a goalie. 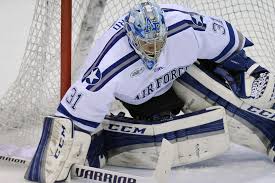 The whole field are on the ice where the game is played is referred to as a rink.

In earlier days the rink was smaller in size and as the game became more famous among its spectators, the rink size was further enlarged. This game is also played as part of the winter Olympics.

Rules laid out for field hockey also hold good for ice hockey and for big tournaments, rules and regulations of the hockey associations are given their due respect. This is a winter game popular in the United States and other European countries, most importantly Montreal.

General rules of the hockey game are applied to this sport as well. A hockey stick is used by a skater to pass the puck into the opponent’s net where he puts all his concentration and efforts to score goals.

Around six main players play the game at any time on the rink, six players consisting of five team members and one goal tender.

Among the five main players, they are again divided into three forward players and two defence men depending on their positions on the rink and also on the movements they make while playing the game. Goal tenders are non skaters and the rest of the five main players are all skaters in their skating attires.

More on the Game

Substitutes can be useds in the game as and when they are required. The game of ice hockey so usually played in three intervals, each interval extending up to twenty minutes each.

Three ways in which a puck that is shot at is not considered for the game are, when the puck is hit by the skater, but the skater reaches the opponent’s side earlier than the puck itself, secondly when a skater shoots the puck that travels right through the centre line of the rink towards the goal line of the opponent and finally a situation where the puck goes totally outside of the goal space.

In case the puck manages to come back into the rink after it has once gone out from the goal space, it is still not considered for the game.

Like in many other games, penalties are offered in a game of ice hockey as well. There are two types of penalties offered here – minor penalty and major penalty.

Minor penalty can be given for a maximum of 2 minutes and that of major penalty lasts up to five minutes. In those five minutes, the player is restricted to be in his own net space.

Since this game is played on ice, it requires players to have good clothing to protect themselves from severe injuries.

The goal tender requires a different kind of protective clothing for himself. They use the same basic clothing as that of the ice skaters or hockey players on the rink, the exception being the different kind of skates in their legs.

They use a specialized kind of skates on their legs that enable them to stop a goal side ward and restricts their movement both forward and backward.

In short, it facilitates effective movement of the goal tender towards his sides to stop a goal from reaching its destination.

This effective padding and specialized clothing of the goal tender makes it hard to score goals in a game of ice hockey and has also become a topic of discussion in the past.

Injuries are common in this game of ice hockey. Skates are made sure to be rough and rigid so that the players adjust to their moves on the terrain.

They have to be really fast and swift in order to chase the puck and pass it on to the opponent’s goal.

There are also risks of fights between players of the game and sometimes players use wrong ways to hit a goal that may sometimes go unnoticed.

Women are also popular in this game and women’s ice hockey is well known game in the lands of Canada.