Humayun was the son of Babur who was the founder of Mughal Dynasty. His full name was Nasiruddin Mohammad Humayun. He was born to Babur and Maham Begum on 17th March 1508 in Kabul. He was the second Mughal ruler of territories in the Indian subcontinent along with Pakistan, Afghanistan and parts of Bangladesh. He became emperor at the age of 23.

His brother Kamran Mirza who was the ruler of Kabul and Lahore was his bitter rival. His biography was known as Humayunnama and was written by his youngest sister Gulbadan Begum. Emperor Akbar requested her to write the biography Humayunnama to chronicle the events of his father’s life.

He was fond of Gulbadan’s story telling skills and he got his father’s life documented by her. Gulbadan took it upon himself to produce the document and it was titled, “Humayun Badshah Gulbadan Begum bint Babur Padshah amma Akbar Padshah” which came to be known as Humayunnama in short.

Humayun had several siblings who turned out to be his rivals for the throne in later years. He lived a luxurious lifestyle from the beginning and was brought up like prince. He learned Persian, Arabic, Turkish and other languages. Other than these he learnt mathematics, philosophy and astrology also.

He received his training in warfare skills from his childhood and was appointed governor of Badakhashan at the age of 20. As a young Governor, he fought two battles in India.

First at Panipat and second at Khanwa. He proved his father in these battles that he had administrative capabilities and bravery of a soldier. Humayun had several wives and concubines like Hamida begum, Mah Chuchak Begum, Bibi Gunwar begum, Khanish Aghacha etc. He had many children too.

Humayun’s battle for the throne

After the death of Babur, he was declared emperor in 1530 at the age of 23. Babur ruled over his territory for a very short period of time. The empire he inherited from his father was unstable and lacked administration. Thus, Humayun received lots of trouble in maintaining such a large kingdom. Neighboring countries also aspired to acquire his kingdom.

The Indian Afghans wanted to drive out the Persian Mughals to gain their supremacy back. Mohamad Lodhi, a descendent of the Lodhi dynasty conspired with Sher Shah Suri against Humayun. After months of preparations of war, the Afghans annexed Banaras and went forward to snatch Jaunpur. But in august 1532, Humayun defeated them after which Mohammad Lodhi fled and died away.

But Sher Shah Suri recovered south Bihar and again became its ruler. Humayun then returned to Agra to settle the disputes with Bahadur Shah.  In this bloody battle Humayun’s army faced heavy losses. It weakened the strength of his army.

His own brothers were also conspiring against him. Sher Shah Suri was continuously attacking them which forced Humayun to retreat towards west. Sher Shah Suri’s strength was increasing day by day. He again attacked Humayun in 1540 at Kannauj. Humayun faced a shameful defeat in this battle. It led him to leave battlefield and flee from India and Sher Shah got control over Agra, then the capital of India.

Humayun lost his Mughal territories and left India and move towards Iran to take refuge there under the ruler of Safavid dynasty’s ruler Shah Tahmashah. During his exile, he met Hamida Bano. He later on married Hamida Bano and had Akbar with her who later on became the ruler of Mughals. He remained in exile for fifteen years. He took shelter in Persia with his wife and some companions. Shah Tahmashah not only welcomed him but treated him as a royal visitor. He provided refuge to them.

With the help of Shah Tahmashah, he proceeded to claim Kandhar and Kabul. On the other side, after getting control over Indian subcontinent area, Sher Shah Suri established his own dynasty. Sher Shah Suri died in 1545 and his successor son also died within few years. This provided a golden opportunity for Humayun to regain back his kingdom. 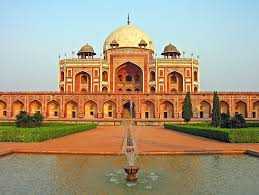 Humayun gathered his army in the leadership of Bairam Khan. He claimed the throne on 23rd July 1550. After the death of his rivals he returned back with strong force and determination and recovered back his kingdom. He ruled over the most of India, Pakistan and Afghanistan like an efficient ruler.

Humayun was not a very fierce warrior; he had profound respect for the other things in life. He was very affectionate towards his brothers. He forgave them in spite of their illicit controversies against him. After sitting on the throne, now he had wished to enlarge his kingdom. He launched several campaigns to expand his kingdom.

Humayun was not known for his great military leadership but the catch here is that he knew his capabilities and that’s why he allotted the military supremacy of his army to General Bairam Khan.

Humayun was known for his peaceful personality that’s why he was given the title of ‘Insaan-i-kamil’ which means perfect man.

His death was an accident and not a conspiracy. One day when he was descending the staircase of his library with his arms full of books, on hearing the azaan he tried to kneel but tripped and fell. He was injured and no treatment could cure him. He died three days later on 27th January 1556.

Humayun left behind a rich legacy for his son, Akbar. Akbar got a stable empire from his father. Though it would not be a false statement to say that Humayun expanded his kingdom but it was only under Akbar that the empire attained its full shape.

Humayun was a man of worth. In his memory, his Begum expressed the commissioning of Humayun Tomb, a memorial to his death. He was later given a grand burial at Humayun Tomb.