The digestive system is a system of organs working together for the uptake of food, its digestion and to eliminate the indigestible waste products out of the body. It is also known as the Alimentary canal.

Digestion is defined as the breakdown of complex organic food materials into simpler compounds and thus process, releasing energy required by the body.

The human digestive system consists of the alimentary canal and associated digestive glands.

Histology. The alimentary canal is lined with muscular layers. It consists of four layers.

Parts of the alimentary canal 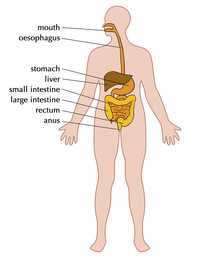 Mouth: The mouth is composed of two lips, upper and lower lips. It is the passage for the entry of food.

Buccal cavity: It is the space which is bounded to the sides by jaws, top by the palate and below by the throat. The buccal cavity consists of the tongue which is a highly muscular organ and consists of papillae. The tongue helps in mixing saliva with food and facilitates in swallowing. It also helps in telling the taste of the food.

Teeth: Teeth are embedded in both the upper and lower jaw and helps in chewing, cutting and piercing the food. There are four types of teeth present in humans – Incisors, canines, premolars and molars. Adult human being consists of 32 teeth in the permanent set.

A tooth consists of 3 regions- Crown, neck and root. The root is embedded completely in the jaw and consists of nerve endings and blood vessels. The neck is surrounded by the gum which is soft and fleshy skin. The crown is the exposes part of the tooth and is covered by a shiny material called enamel.

Pharynx: The food and air crosses the pharynx to reach the oesophagus. It has voluntary muscles which contract and help in swallowing.

Stomach. The stomach is a J shaped muscular sac which stores the food for some time. It is also involved in mechanical churning of food, partial digestion of food by gastric juices and regulation of passage of food in the small intestine.

It has 3 parts- The cardiac, fundic and pyloric. The inner surface of the stomach consists of various folding known as gastric rugae which help in increasing the surface area for maximum storage of food. Stomach also secretes the hormone gastrin.

Small intestine: Divided into 3 major parts- duodenum, jejunum and ileum, the major function of the small intestine is absorption of food. It also consists of microscopic finger like projections known as villi which increases surface area for effective absorption. Small intestine also secretes some hormones.

Large intestine: The large intestine is divided into 3 major parts- Caecum, Colon and Rectum. Its major role is absorption of water, formation of faeces, and production of mucus for the lubrication of mucosa.

Liver: It is the largest gland of the body consisting of hepatocytes, bile canaliculi and hepatic sinusoids. The liver weighs 1.6kg. There are two lobes in the liver. Right and left lobe.

The liver forms bile which is stored in concentrated form in the gall bladder. Liver also has a function in detoxification of poison or toxic substances in the body.

Pancreas: The pancreas is a gland which is both endocrine and exocrine in function. The endocrine part secretes hormones namely, insulin, glucagon and somatostatin.

The exocrine part secretes pancreatic juice which consists of proenzyme trypsinogen, chymotrypsinogen and procarboxypeptidase. There are other enzymes also such as pancreatic lipase, nucleases and pancreatic amylase.

The both secrete enzymes, mucus and alkaline watery fluid. The mixture of all these secretions is known as the intestinal juice or succus entericus. 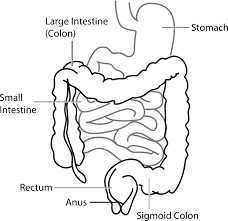 The digestion of food starts in the mouth and is completed in the small intestine. Digestion takes place separately in each organ of the digestive system.

The organs churn the food by mass peristaltic movement and the digestive glands pour their secretions to facilitate the process of digestion. The processes of digestion in various organs are as follows:

Mouth and buccal cavity: Digestion of starch starts in the mouth where starch is converted into maltose by the action of enzyme, salivary amylase. The saliva also contains various electrolytes such as sodium, potassium, chlorine etc. 30% of starch is hydrolysed here and the food is converted into a bolus which is further passed down to the Oesophagus.

Oesophagus: It does not contain any digestive gland so it does not aid in digestion. It only helps in passage of food from the buccal cavity to the stomach.

Stomach. The stomach consists of Gastric glands which secrete gastric juice. The gastric juice gets mixed with the bolus by the churning movements of the stomach. HCl helps in conversion of proenzyme pepsinogen into active form, pepsin. Pepsin helps in hydrolysis of proteins into peptides. Digestion of casein present in milk also takes place in the stomach by the action of enzyme rennin.

Small intestine: The small intestine plays a major role in both digestion and absorption of food. The pancreatic juice and bile from the gall bladder are released into the small intestine. Bile juice helps in emulsification of fats. It also coats each small fat droplet to avoid their merging together. The Pancreatic amylase hydrolyses starch and glycogen into maltose and dextrin’s.

Major absorption takes place in the small intestine. The final products after digestion such as glucose, fatty acids, amino acids etc. get absorbed into the blood lymph. The large intestine is also not much involved in absorption. It only absorbs some minerals and water.