Human beings have a closed circulatory system meaning that their blood flows in blood vessels unlike some lower animals in which blood flows freely in the tissue spaces present in their body as they lack any blood vessels.

The blood is red coloured connective tissue which carries materials to the various parts of the body. It is pumped by the heart. The red colour of the blood is due to the presence of iron containing pigment, Haemoglobin.

The Haemoglobin helps in transport of oxygen. One haemoglobin molecule carries 4 oxygen molecules. Blood is composed of Plasma, also known as the mother liquid and formed elements.

Plasma is a straw coloured viscous liquid which has all the formed elements floating in it. It contains 90% water, 7-8% proteins (globulins, albumins, fibrinogen etc.), 1% inorganic salts (cations and anions) and 1-2% other substances such as anticoagulants, antibodies, cholesterol, gases, hormones, waste materials such as urea.

There are many functions of plasma some of which are transport of food, gases, waste products, regulation of pH, temperature, lymph formation and prevention of blood loss.

Also known as erythrocytes, the red blood cells are red in colour due to the presence of Haemoglobin. The RBCs do not have nucleus so that more of oxygen molecules can be carried by it. They are biconcave, circular and have a life span of 120 days.

The normal RBC count in a healthy human is 4.5-5 million RBCs per cubic millimetre of blood. Anaemia is a condition in which the number of red blood cells decreases abruptly.

Abnormal rise in RBC count is known as polycythaemia. The RBCs are formed in the Reticuloendothelial cells of the red bone marrow. It is destroyed in the liver and spleen. Thus, Spleen is also known as the ‘graveyard of RBCs’.

Also known as Leucocytes. They lack haemoglobin. The average WBC count is 6000 to 8000 cells per cubic millimetre of blood. They are synthesised in lymph nodes, thymus, spleen and red blood marrow. The white blood cells are of two types- Granulocytes and Agranulocytes.

The Agranulocytes do not contain granules in their cytoplasm and are further of 2 types: Monocytes which have a bean shaped nucleus and are phagocytic in nature and Lymphocytes (B lymphocytes and T lymphocytes) which secrete antibodies and are responsible for the immune response of the body.

Also known as thrombocytes. They also lack haemoglobin and hence, are colourless. They are formed in the red bone marrow by the process of thrombopoietic.

They are not exactly cells but are cell fragments. The platelet count in a healthy human is 250000 platelets per cubic millimetre of blood. They are mainly involved in blood clotting.

The human heart is muscular organ which is involved in pumping of blood to the various parts of the body. It is roughly the size of a clenched fist. The heart is located almost in the middle of the thoracic cavity and is slightly tilted to the left. It is covered by a tough sac known as the pericardium. It is protective in function. 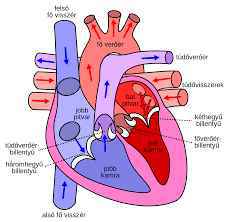 The heart consists of three layers: Endocardium, Myocardium and Epicardium. The heart also consists of the Sino atrial node or the SA node which helps in initiating a wave which in turns spread to the whole musculature of the heart, hence resulting in the ‘beating’ of the heart.

It is also known as the pacemaker of the heart. The SA node is the part of the nodal tissue of the heart along with the Atrioventricular node, bundle of His and Purkinje fibres. The rate of heart beat is controlled by the central nervous system (parasympathetic and sympathetic) and the hormones (epinephrine and norepinephrine).

The muscular, elastic tubes which carry blood are known as blood vessels. There are two types of blood vessels- Arteries and Veins. They are joined together by very thin blood vessels known as capillaries.

Artery has wall composed of 3 layers- tunica intima, tunica media and tunica externa. They carry blood away from the heart for distribution to the body. The flow of blood in them is fast.

Veins are also composed of 3 layers just like arteries. They carry blood from the body back to the heart. The flow of blood in veins is slow and steady. 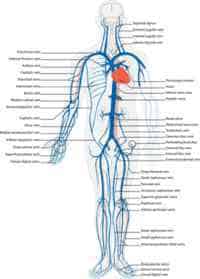 In the same way, blood group B will have antigens B on the surface of RBCs and anti- A antibody in plasma. Blood group AB has both A and B antigens on RBC surface and no antibodies in plasma.

Another system of blood grouping is Rh blood grouping due to which blood groups are either Rh positive or Rh negative. It is due to the presence or absence of certain antigen, known as the Rh antigen on the surface of RBCs.

Heart and rate and its measurement: The heart rate or the number of heart beats per minute is 72. It can be measured by checking the pulse of a person.

Disorders of the Circulatory system