Horses have always been associated with speed. Since we were kids, horses have been introduced as a form of transport. But horses are also good and loyal companions. It is difficult nowadays to see horses often, except on the beaches and tourist spots. In India, horses are used for tourist recreation, for weddings etc.

They are not used for farming. Though they are respected and served well, horses is also one of the animals that are exploited for monetary gains. But what species are horses? When did they find their way into human lives? How have they survived do long, even after the encroachment of vehicles and mechanical forms of transport. 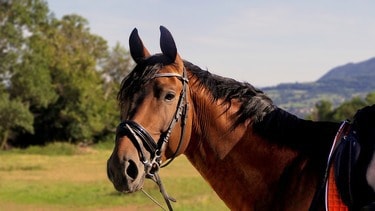 Horses have evolved an extinct but smaller species called Eohippus. They have a very good for response, that is, they can instantly react to danger and run. They have been believed to be domesticated by humans since 4000 B.C. There have been several depictions and evidence supporting the same.

Horses were the standard vehicles of transport in medieval times. Generals are commanders used horses in war to external command. Horses were always a symbol of pride.

Horses have been used to portray supremacy, as the higher ranking officials would get better and majestic horses than the general militia.

Horse has a mild nature. In the wild, they have to be very alert and instinctive. They usually flee on the first sight of danger. But if a confrontation Vis inevitable, they also do stand there ground. This defensive behaviour is mostly observed when a horse’s young one, called a foul, is in danger.

Humans have been taming horses since a very long time. Through the thousands of years of breeding, many of the current horse species have become quite docile. This behaviour is especially seen in the daft horse that is horses that are used to draw carriages, to plough the fields etc.

There are many different breeds of horses like the. But these are breed names. Horses can also be generalized according to the types of activities it carries out and its traits. These categories include Daft horses, gaited breeds, Cold bloods, hot bloods and Warm bloods, which are a mixture of the two. Cold bloods are usually known for their docile nature. They are used as daft horses. Hot blood is more alert and athletic. They are used as race horses etc.

A Gelding is a castrated male horse, called this despite of their age. A Mare is a female horse of 5 years of age or older. Stallions are male horses of 5 years or older. Usually when people refer to or visualize horses, they are referring to stallions.

House have had a long standing relationship with humans. It is believed that the early humans tamed wild horses for the purpose of travel and transport. Since then, they have been loyal companions to humans. Though they are much more silent and calm, they do feel and show affection.

A horse will never let an unknown individual ride or even get close to it. The sense of mutual respect, cooperation and affection has to be developed overtime. This is fine by personally grooming, feeding and spending time with the animal. Horses are also the inspiration behind the mythological creatures like, The Unicorn, the Pegasus etc. and the relationship they have with their respective mythical heroes.

Though, it was a standard form of transport, nowadays horses are rarely used for transport. Only under special circumstances is a horse used to pull a carriage.

Horse meat too is rarely used as food since; they are of too much value alive. The most widespread use of horses now, is for Derby racing. Race horses are especially bred for that purpose. Riders take in horses when they are mere foals and raise them for racing purposes. This form of a bond is long-lasting.