It is a sport that is fast gaining recognition in this country. Although it was India’s national sport up until 2012, it was barely known throughout the country. In India, cricket has been the dominating sport since times unknown. People follow cricket more than hockey, it is a known fact.

But it is slowly gaining prominence. But what do we really know about Hockey? How many competitions have our team participated in? How many have we won? How many medals does our national team have to its credit? What are the basic rules of the game?

Unlike other games, the origins of hockey as a game, is pretty much unknown. Even the origin of the name of the game is debated around the world. Some believe that Hockey was derived from the French word Hoquet, which means a shepherd’s stave.

But an official reference to hockey was given in the book, Juvenile Sports and Pastimes, where a separate chapter was assigned to Hockey. Games similar to hockey, involving Sticks and projectiles have been depicted in several illustrations from ancient Greece. The world’s origin can also be derived from ‘hocks’ which are rubber stoppers for barrels. 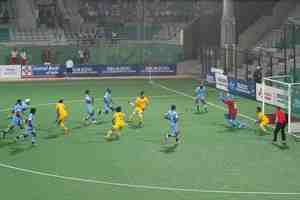 The most prominent forms of the game include Field Hockey, Ice Hockey, and Bandy hockey. Bandy hockey originated in England, which can be traced back to the 19th century. The rules of this game are similar to football. It is mainly played in Russia, where it is the national sport.

There’s a women’s championship too. A Bandy world cup is held every year. Ice hockey is the other prominent form of the game. It is an official sport in the winter Olympics.

It is mainly played in the Western countries. Ice Hockey is pretty famous in Canada, Latvia, Czech Republic, Finland and Slovakia. It is played on ice using skates, hockey sticks and a puck. A puck is a 3 inch diameter circular block of vulcanised rubber. It is the national sport of Latvia and the national winter sport of Canada.

Another prominent form of the game is Field Hockey. Field hockey is played in the European and Asian countries. It is mostly played on a fresh grass, synthetic sand based or water based ground. It is played using hockey sticks and a hard ball. Field Hockey has been a sport in the Summer Olympics. It has been in the summer Olympics since 1908. There are various other forms of Hockey too.

Like many other games, it consists of two teams playing on a pitch divided into two sides with goals on each side. The goal is to score as many goals before the time is over. Each team consists of 11 players each.

The game is played in two halves of 35 minutes each. There is an interval of 15 to 20 minutes. Ice hockey is played with a puck, and each team tries to shoot the puck in the other team’s goal. In other forms of hockey, it’s usually a ball.

The period of 1928 to 1956 was the golden period of Indian hockey. Our national team won 6 consecutive medals in the Olympics. It was declared as the national sport at that time. The fall of Indian hockey began after the retirement of Major Dhyan Chand, one the greatest players in field hockey.

Indian hockey team has participated in 24 Olympic events in total, amassing a total of 8 gold, 1 silver and 2 bronze medal. Though hockey was the national sport, in 2012, it was officially declared that India does not have a national sport.

Efforts are being made to spread the love for the game, to help it grow as much as cricket. Hockey premiere leagues have been held in India, with many celebrities endorsing the sport. Let’s try our best to embrace this sport and bring it back to its former glory.