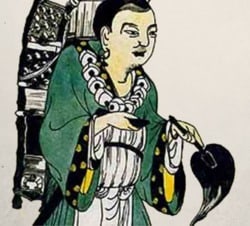 Hiuen Tsang, also known by various other names such as Hiouen Thsang,  XuanZang, Hiuen Tsiang,  Hsien-tsang Hsyan-tsang,  Hsuan Chwang, Huan Chwang, Hsuan Tsiang, Hwen Thsang, etc was one of the most renowned Chinese scholars and Monks who visited India to learn more about Buddhism and its adaptation in the Indian culture.

He was born in present day Henan province in around 602 AD. His family was a famous and influential one, and were proficient and erudite. His father was a staunch follower of Confucius and also was the County Magistrate. As a child, he was a voracious reader with deep interests in reading religious books including Chinese classics and the writings of the ancient sages.

Because of this he was given the title of ‘novice monk’ at a tender age of thirteen. Then, because of socio-political turmoil at Henan, he moved to Sichuan where he earned the title of a ‘Full Monk’ or ‘Bhikshu’. Because of his interest in religious texts, he travelled throughout China searching for more and more of them.

Then, at a later stage he decided to visit India, the birthplace of Buddhism in order to quench his thirst for knowledge of Buddhism and Indian history and culture. He was already aware and acquainted with FaHein’s travelogues of India and wanted to explore and bridge the uncompleted versions of texts of Buddhism that he discovered there.

His journey to India

In order to get a detailed idea about India, and the Buddhist texts and cultures in different parts of the country, Hiuen Tsang decided to undertake his joinery to India by foot on land. It was a famous and miraculous journey spanning seventeen years.

The details of his travel are recorded in the text, The Great Tang Records on the Western Religions.
In around 627 AD, Hiuen Tsang is said to have a dream which was a sort of a revelation that urged him to go to India to unveil the unknown facts about Buddhism.

At that time, however, foreign travelled was barred because of a state of emergency due to ongoing war between the Gokturks and Tang Dynasty. He is said to have illegally smuggled himself out by convincing some guards at the border and then, encompassing the Gobi desert, he finally reached Turpan in 630 AD where he met the King, a Buddhist himself.

The king was benevolent enough to provide him with allowances and necessary means including letters of recommendation to aid his further travel. He had to cross the hottest mountain in China, the Flaming Mountains to reach westward, where he tricked robbers and somehow reached Kashmir. After travelling through Kyrgyzstan, Uzbekistan, Afghanistan, he finally is said to have reached India in around 630 AD.

While in India, he travelled to Jalandhar in modern day Punjab and later visited the monasteries in the Kulu Valley and then going to Mathura the Yamuna river. In spite of being a Hindu majority area, Hiuen Tsang observed that there were about two thousand monks of both major sects of Buddhism.

Then, eventually, he reached the Kannauj, the capital of the Empire of King Harsha. On his way, he has even mentioned meeting about ten thousand monks of Mahayana and Hinayana Buddhism. He has also written accounts about King Harsha’s patronage of art and culture and science as well as his encouragement to make the people aware about Buddhism.

While his stay in India, he also got an invitation from the King of Pragjyotishoura in the kingdom of Kamarupa, King Kumar Bhaskar Varman. He spent three years in this kingdom studying in detail the cultures, and tradition of the common people as well as the day to day working of the Kingdom.

Hiuen Tsang was also invited to see the Kumbh mela to see the King’s benevolence. King Harshavardhan used to give away gifts to the underprivileged during the Kumbh mela in Prayag and wanted these accounts to be spread around the world.

After the ceremonies were over and concluded, the King Harshavardhan arranged for a grand farewell in honour of Hiuen Tsang for his return back to China. He crossed the Hindu Kush and made his way back to China in 645 AD.

When Hiuen Tsang returned to China, in 645 AD, he was greeted with grand celebration and processions. The emperor of Tang dynasty offered him an immense numbers of civil honours and offices of great public influence. However, Hiuen Tsang refused all those.

He denounced all these luxuries, and receded to a monastery and channelized all his efforts in the translation of over six thousand Mahayana and Hinayana Buddhist texts that he had obtained from India.

During his stay in India, while his stint at Nalanda, he came in contact with many Buddhist leaders and also brought over six hundred Sanskrit texts with him back to China. Impressed by his efforts, the Emperor of China helped him set up a translation bureau.

Hiuen Tsang himself is said to have translated some 1330 fascicles of Buddhist scriptures into Chinese. He even published out an unabridged version of the Mahaprajnapramita Sutra in Chinese.

The extensive and unabridged accounts of Hiuen Tsang not only give us a clear view of Buddhist texts and ideas of that era but also tell us a lot about the cultures, tradition and history of that era.

Since not much conclusively written accounts are not resent in India of that period, Hiuen Tsang’s writings form a major source and reference for the determination of the historical past of many areas like present day Bengal.

Hiuen Tsang is said to have died in around 664 AD aged sixty two. His bodily mortal remains have been still preserved in different part of the world. His skull had been previously held in the Temple of Great Compassion in Tianjin and then, in 1956, it was moved to Nalanda by Dalai Lama.

It was kept at the Patna museum for a brief period before being moved into a dedicated memorial hall in Nalanda in 2007.