Speech on Hiroshima Day for Children 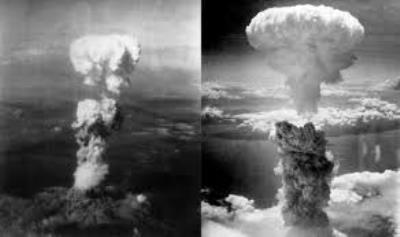 A warm welcome to everyone present here. The topic on which I am going to speak today is Hiroshima Day.

Probably every one of us here is familiar with the greatest tragedy in human history of destruction of human beings by other human beings.

That grotesque event took place on the 6th of August 1945 in the city of Hiroshima when another precedent was set that human beings are one of the most developed species on earth and at the same time is one of the cruelest of the mall who can kill their own kind without batting an eyelid by the press of a button.

The second world war was at its peak. Germany was strong with Axis members Japan and Italy. On the other side, the alliance forces of the United States and Britain wanted to crush the German forces. At a time when nothing seemed easy, the allies took to something that was actually easy.

They decided to make a nuclear weapon and drop it at the heart of a bustling and booming city filled with innocent men and women and children just to prove their manliness and to claim success in one of the most futile engagements ever created by mankind that is war.

For doing this, all they did was hire scientists, make a bomb and drop it on the heads of thousands of innocent people who are probably unaware of anything that was going to happen that day.

That fateful day destroyed not only a whole generation and many generations to come but also checked the foundation of something called humanity and belief in it. It would only take a rock in place of the heart to have the mental composure and conscience to be able to execute in mass assault of that extent done in cold blood just for political muscle flexing.

Guess what? the larger powers were not satisfied even then. They decided to drop another bomb few days later on the 9th of August 1945 in a neighboring city of Nagasaki. And finally, after killing thousands of people and ruining their fourth coming generations of several thousand more, the named this entire act of clandestine political gain as a chisel to shape a brighter tomorrow and the deaths were named as Collateral Damage.

These nuclear bombs not only destroyed many lives but also the harmful nuclear radiation from them kept on creating genetic mutations and diseases and birth defects in the people of surrounding neighboring areas even today after almost 70 years of the incident.

The radioactive emissions from Hiroshima are still active and will be active even in the years to come creating birth defects and many more cancerous diseases.

Hiroshima Day is celebrated easier on 6th of August in remembrance of those whose lives were affected by the nuclear bombings of that devilish day. Every year on this day people are made to realize how human beings can give up all their so called civilized learning and behavior and conscience and can easily take lives of the others in cold blood without batting an eyelid.

This day is a day of self-evaluation and retrospection. We need to take a moment to acknowledge that something is wrong with our Civilization and where it is going. We have become so engrossed in personal games and selfishness that we have given up all principles of democracy and Justice all together. Even today in many aspects of life we see people harming others for materialistic gains.

Even after so many years of the nuclear bombings of Hiroshima and Nagasaki nothing has essentially changed. It is only a matter of luck that the earth has not been destroyed into pieces by now. After that fateful incident, many international peace Treaty was signed which resulted in dismissal of nuclear stockpiles. However, these were just a formality and an eyewash.

Every capable Nation today maintains a good Arsenal of nuclear weapons and because of these nuclear weapons there are proxy wars being shot in mostly the under developed and developing nations which still translate into bloodshed of the innocent in scores and thousands on a daily basis.

On this day we all must take a pledge not to harm others and to work towards the realization of a truly developed Nations and human race as a whole by dismissing Weapons of mass destruction which not only kills people but also kills their dreams aspirations and hopes.