Which is the highest waterfall in India?

Kunchikal Falls in the district of Shimoga, Karnataka state boasts of the highest waterfall in our country. The waterfall can be located somewhere amidst the border region of Udupi and Shimoga and is one of the most scenic spots of the country. 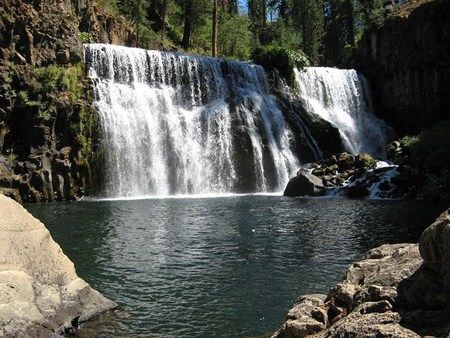 The waterfall emerges from the river Varahi, and the waterfall spreads its waters close to Hulikal ghati temple. The waterfall in total is 455 meters, the highest in the country.

Nature is at its best in the valley of Kunchikal waterfalls. The best time to visit the area is during the months of July to September, when rainfall is at its peak. The dense rainfall received makes the area lush green and the whole region around the waterfall turns into a picturesque picnic spot one would love to visit.

The greenery belt becomes appealing and the entire zone becomes a green zone. The lush waterfall falling from a height has high currents passing through them and the dense waterfall area becomes a high current zone in those three months.

The natural scenic beauty of the place attracts thousands of locals and visitors around this time of the year. Following in nature’s footsteps, one can find that in the lap of nature lies a majestic flow of water that can have hydro-electric power generation capabilities under the dense flow of water.

Also, tourists are advised not to litter in the place surrounding the waterfall as it has been protected and the government has taken strict measures to preserve the greenery around the place.

The hydro-electric power plant project undertaken near the waterfalls

The government has taken steps to convert the high energy/power of the water currents into a useful one and hence we find a hydro-electric power plant installed at the place where the water falls with all its might.

This place draws energy from the waterfall (converts water energy into hydro-electric energy) and supplies it to power stations.

Thus, one form of energy is converted into another and the energy thus obtained from the power plants is used by power stations for power supply to various zones of the state.

The river Varahi has strong flow of currents through it and to reduce the power of water, the river water is contained in a dam built across the river.

The Mani dam however reduces the water power and makes the water flow at lesser speeds and contains them in a reservoir built across the dam.

Thus, water stored in the reservoir of the dam is used for variety of purposes and is very useful in generating power at the hydro-electric power plant.

Restrictions imposed in the area surrounding the waterfall

The place is not open to public at all times. The place has many restrictions imposed for visiting purposes since government has made strict laws to protect the scenic beauty of the place.

The place is less polluted compared to the surrounding areas. The valley offers breathtaking views for travelers, at the same time posing a high risk due to the dangerous curves in the valley plus the high altitude ranges.

Travelling at night times is restricted as the zone is a wildlife protected zone and many wild animals roam free in this zone, which could pose a threat to lives of humans, once the sun sets in and it becomes dark.

The dam and the reservoir are totally inaccessible areas for the public. The waterfall can be seen at a distance. To maintain greenery of this valley, the area restricts the use of plastic and hygiene maintenance is top priority.

To conserve nature and preserve its natural beauty, the government has thus taken right measures in the right directions to limit public access to the place and is able to preserve the scenic culture of the place.

The locals of the place are very friendly and co-operating with the officials to maintain and preserve the integrity of the place.

Why has the government woken up to distinctively impose restrictions on certain areas and limit movements of people of late?

In the last few years, we have seen many governments and NGOs working towards building an effective collaboration of volunteers and nature workers to work for the cause of saving our nature.

They are not restricted to being on the paper alone. Measures are strictly being followed to limit people movement in certain zones identified by the government wherever there are activities of poaching and existence of endangered species of wildlife.

The Agumbe Ghat near Shimoga, where the waterfall is located is another example of the same. This valley offers dense forest regions together with the presence of endangered species of wildlife and the government has geared up to protect them from being targets of manual poaching activities.

The presence of strict rules and regulations make the access to the valley a difficult one at night times. In fact night travelling is highly restricted and is also a risky one.

Wild animals may trigger different responses looking at the beaming lights of the vehicles and may act in an unexpected manner posing threat to human lives. Security personnel therefore prevent such activities by imposing vehicular movement at night.

Also, the valleys offer curves that are one of its kinds and traversing them at night is very risky, given the treacherous curves and difficult rides through them. The narrow roads are good when accessed during day times.

Stopping by to take photographs of the scenic valleys are equally risky and therefore signboards are put up at places against indulging in such activities.

Maintaining the natural delicate balance at the place is another keen aim of the officials and to preserve nature in its best form, the nearby villages often spend their time outside only during the day and are mostly indoors by evening.

The travel to the waterfalls and the valley is a once-in-a lifetime experience, and we must definitely look forward to visit this place once.