Which is the highest mountain in India?

Kanchenjunga is the highest mountain in India. It is the third tallest mountain in the world. It has a total elevation of 8,586 metres. It is located between the border regions of India and Nepal. 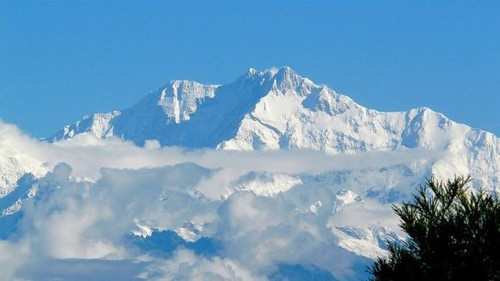 The elevations of Kanchenjunga are found in the Kanchenjunga Himal ranges, where it is bounded by river Tamur on to its west and river Teesta on its east. It is also the most prominent mountain ranges in the Himalayas.

It is very close to Mount Everest, just 75 miles away from it. We all know that Mount Everest is the tallest mountain range in the world. Kanchenjunga popularly means five treasures of snow in the Nepali language.

These five treasures are namely gold, silver, precious stones, grains and religious scriptures and texts. The mountain range has five important peak points, three of these points are in Sikkim and the other one rests in the country of Nepal.

Around 1849, the British had almost assumed the Kanchenjunga to be the highest mountain range in the world.

Later, there were several trigonometric and scientific math calculations that were highly complex in nature that later revealed that Mount Everest is indeed the highest mountain range in the world.

As early as 1905, there were many attempts to climb to the mountain and make successful attempts to rise to the second largest peak in the world.

There were attempts made by many British groups. On September 01st of 1905 a team was able to scale the heights of the mountain but lost a team member during the climb along with other co-partners in the group.

A high-rise avalanche caused the death of a fellow teammate who set out to climb the mountain.

There is no substantial information to support this expedition; hence the first climb to the mountain is recorded as the one climbed in 1955 by another British expedition.

After this, there were several other attempts including Indian teams to climb to the highest mountain range in India. Records reveal that the highest spot of the mountain is never to be trespassed by any human.

Also, there was a camp that actually climbed the mountain without the use of oxygen. The mountain climb is a very tough one, a very treacherous one too! Avalanche fears make up for most of the risk involved in climbing the mountain.

The people of Sikkim consider the mountain a very sacred one and have many important beliefs associated with it. The death rate of people attempting to scale the mountain height is severely high and not all people are successful.

The uppermost zone is totally an uninhabited zone and no one really goes till the top as the people from Sikkim believe in the presence of immortality at the top.

Hence, no one is really permitted to touch the highest point. All people in their expeditions stop short of a several kilometers away from the highest point and this point really remains a mystery even to this day.

Attempting to climb a mountain like Kanchenjunga could be a lifetime achievement in itself. It is not advisable if the person is not professionally trained.

A short trip from morning till evening to the nearby countryside will take the energy out of us. So we can imagine how much of our energy is drained from our body if we attempt to climb a mountain.

As we reach the higher levels of a mountain there is very less oxygen at the top and climbers tend to become breathless as they start on an expedition towards the top.

With very less oxygen, climbers tend to develop breathing problems and insufficient breathing leads to energy draining out from the body at very frequent intervals.

As it is, the expedition is bound to be very tiring as the paths up the hill are usually very treacherous and risky. The risky routes along with shortage of oxygen supplies make the climb not only tough, but very difficult to imagine as well.

Adding to this, the climbers have to carry all essential components with them as they would be left with nothing on mountains.

Unpredictable weather conditions require them to be prepared with tough protective gears to keep themselves warm for the journey.

Curved paths and unidentifiable pits in the mountain ranges can trap many climbers for days together without any sign of coming back again.

Risks are part of life and these climbers have attempted the most dangerous attempt to climb the highest mountain peak in India and achieved the unachievable.

It is always advised to study the risks of climbing a mountain such as this one, as it is not a trekking or hiking expedition for an adventure camp.