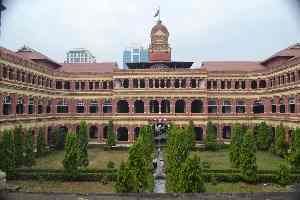 India’s judicial system is made up of the Supreme Court of India which is at the apex of the hierarchy for the entire country and 21 High Courts at the top of the hierarchy in each State. These Courts have a jurisdiction over a State or Union Territory or a group of States and union territories.

Below the High Courts are hierarchy of subordinate Courts such as the Civil Court, Family Court, criminal Courts, and various other district Courts.
Article 214 of the Constitution States, ” there shall be a High Court for each State” however Article 231 of the constitution provides that,” Parliament may, by law, establish a common High Court for two or more States and union territories”

The High Courts are the principal civil Courts of original jurisdiction in the State and can try all offensive including those punishable with death
However the bulk of the work of most of the High Courts consists of Appeals from the lower Courts and writ petitions in form of Article 226 of the Constitution of India.

The Parliament can increase or decrease the number of Judges as and when required in consultation with the president. There are 21 High Courts in India. The Guwahati High Court has jurisdiction over 7 States that is Assam, Arunachal Pradesh, Manipur, Meghalaya, Mizoram, Nagaland and Tripura.

We have a single unified judicial system in India. As a result, there is uniformity in organization, composition and functions of the High Courts, common to all of these. The number of Judges of High Court is not fixed. It varies from one High Court to another. A High Court has a Chief justice and such other Judges as the President of India may deem necessary a point from time to time.

The Supreme Court ruled that Chief Justice of India is recommendation was not binding on the government in case it was made without consulting to senior most Judges of the Supreme Court.

Functions jurisdiction and powers of a High Court

By original jurisdiction is meant the cases a High Court in here in the first instance that is without having been heard in the subordinate Courts. These cases include:

All the High Courts can issue writs like the rates of Habeas Corpus, Mandamus, Prohibition, Quo warranto and Certiorari to protect the fundamental rights.

Power to interpret the constitution

The High Courts exercise the power of Judicial review to Judge the validity of a State Law of the central law. If a law is found to be contrary to the constitution it can declare that law invalid. Such as Abba comes in operative.

The High Court has the power to transfer a case from a sessions Court for consideration before itself if the case involves interpretation of the constitution. It can dispose of the case itself after determining the constitutional questions or it can send the case back to a Court of trial for disposal.

In such a case the High Court can issue such an order as it may deem fit. The revisional jurisdiction can be exercised only in exceptional cases where the interest of public justice requires interference. It is applicable in the following cases:
Where the trial Court had wrongly shut out evidence flagrant error in procedure.
Where material evidence has been overlooked by the trial Court or the Court of appeal.
Violation of principles of natural justice.
Injustice or error of lower parent to the face of the record.
Arbitrary authority leading to wrong Judgement.

A High Court processes the following power over subordinate Courts for superintendence and control over them except Court martials or tribunals relating to the Army:
Send for a detailed report on their working.
Frame rules to regulate the proceedings of the Courts.
Transfer a district Judge.
Recall a district Judge on deputation.
Promote and confirm persons in the judicial service below the rank of district Judge.
Describe forms in which books, forms, entrees and accounts should be maintained by the Courts.
Settle fees to be allowed to officers Clarkson advocates of the subordinate Courts.
The appointment, posting and promotion of district Judges shall be made by the Governor in consultation with the High Court.
Appointment of offices and servants of the High Court – offices and servants of a High Court are appointed by the Chief Justice. He settles conditions of their service including leave and promotion with the approval of the Governor. The service conditions must be in accordance with the State laws.

The High Court is a Court of Record which implies that:
It’s Judgements are kept as a record and are used as president. It is binding on all subordinate Courts in the State. But in other High Courts the Judgement of High Court can be used only in support of an argument in a case before it.
If a person commits content of a High Court, it has the authority to punish him.