The term ‘Forest’ has been derived from the Latin word ‘Foris’ meaning outside with reference to village boundary or fence including all uncultivated and uninhabited land. Nowadays, forests mean any land managed for diverse purpose of forestry, whether covered with trees, shrubs, bushes, climbers, grasses, etc.

What is Haritha Haram?

Telangana Ku Haritha Haram, better known as Haritha Haram is a noble initiative of the Telangana Government to introduce large scale reformation in the field of agriculture and forestry to improve the green cover which has a tremendously positive impact on the ecological balance thus promoting sustenance of the human race. 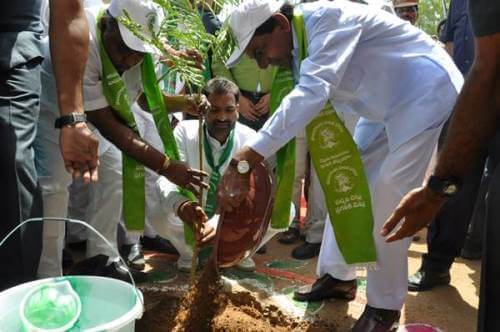 Telangana presently has a forest cover of 24% and through this program the Government aims at incrementing this figure to 33%.

It was launched with the efforts of the erstwhile Telangana Chief Minister Shri Kalvakuntla Chandrasekhar Rao on the 3rd of July, 2015. The principle target of the Haritha Haram is to plant 230 crores of plants in Telangana.

Aims and objectives of the Haritha Haram

Benefits of Haritha Haram to the ecosystem

Natural vegetation forms an integral part of the ecosystem and its elimination or endangering would create massive imbalances in the environment leading to a massacre of natural calamities.

Plants are the source of food to many animals on this earth and are an essential component on life sustenance on this earth.

It is in the beginning of each food chain which makes plants of paramount importance for the survival of species.

Because of its root connection with the soil, plants absorb groundwater and transpire it into the atmosphere thereby not only cooling it but also increasing the moisture content in the atmosphere and subsequently causing rainfall.

Thus, plants are extreme importance for the ushering of precipitation.

Plants perform the process of photosynthesis in the presence of sunlight  to produce food.

Carbon dioxide, exhaled by us humans is one of the major raw materials needed for the effective completion of photosynthesis thus giving oxygen as it’s byproduct.

Trees therefore help to replenish oxygen of the atmosphere which is a prerequisite of aerobic organisms like human beings.

Trees often grow strong boding with the soil through their root system. This root system is so strong, that they can act as natural embankments during times of flood and prevent inundation of the soil, and property.

Plants usually propagate through pollination for which it lures insects by giving it nectar.

If these plants are destroyed, so will be the source of nectar for insects and bees and as a result the ecosystem of bees and insects will also be threatened.

Trees are home to various forms of fauna. It provides natural habitat to many animals like monkeys, owls, bats, snakes etc.

The need for Haritha Haram arises for the following problems that the Indian forest cover faces:

Forests constitute a renewable resource contributing to economic development of a country by providing goods and services to the people and industry.

They play an integral role in enhancing the quality of environment by influencing the climate, as well as the life support system.

In an average day, more than 400 square kilometers of tropical forests are destroyed throughout the globe. India is a developing nation which prides it’s industrialization and rapid modernization.

However, we should not forget that no matter how advanced we become, plants can never be manufactured in factories.

It is high time that we realize this epiphany truth or else we will be only digging our own graves in this barren land of minimal endangered forest cover.

The Haritha Haram programme is an excellent and praise-worthy initiative from the Government and hopefully other states and countries will follow suit. The Great Russian writer Anton Chekov rightly wrote,

A tree is beautiful, but what’s more, it has a right to life; like water and the sun and the stars, it is essential. Life on Earth is inconceivable without trees.

Forests create climate, climate influences people’s characters and so on and so forth.

There can neither be civilization nor happiness if forests crash down under the axe, if climate is harsh and severe, if people are also harsh and severe – What a terrible future!