Handicapped people are people with disabilities or deformations in memory, limbs, senses, body etc. which causes a significant reduction in their efficiency and working. People often mistake handicapped as inefficient and weaklings. But the truth is that they are just some special people.

Though they might not have one gift of god but they are special and unique in their own ways. God has gifted them with special powers so as to overcome their disability and live their lives in the world happily.

Handicapped people don’t need any of your sympathy. What they need is love, affection, trust, responsibility and acceptability. They should not be alienated from the society just because they are especially abled. Their hands should be held and they should be given all the love in the world.

Shunning them out is not the correct way. Accept them as they are and make friends with them. What has happened to empathetic and sympathetic minds is beyond my understanding. I hate it that even they are children of the god and yet they are not acknowledged in the society. 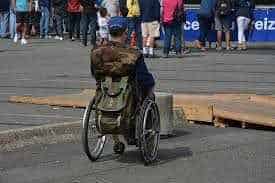 They eat the same food, drink the same water, have the same blood flowing in their veins; then why such indifferent attitude and bias towards them. It is more disheartening that their own parents turn them out once they find out that their child is especially abled.

I know it feels bad and sorrowful to have a deformity in your own flesh and blood. But their child needs their support. Without the support of parents, the children cannot battle the society. The society will continue to raise questioning and accusing fingers. But it is our duty to answer or to dodge them carefully.

The disability in a handicap person can be from birth or can arise in the later stages of life due to some accident or medical condition. Generally, babies who are born with difficulties are very difficult to cure. But as science says, it has the cure for everything. But the cure is costly.

It is only affordable to the upper rich class of the society, what to think of the middle and lower strata. Even the infrastructure available at our hospitals is not enough to deal with such deformities. But the people who acquire deformities in later stages of life can overcome their condition at some point in their life. At times, there is some cure but it’s efficiency has always been ruled out.

There are many examples of handicapped people who made it big in their lives. They do not need your sympathy but what they do need is your incessant support. Government has reserved seats for them in all colleges and government jobs. It is actually right to help them on whatever way we can.

Handicapped people are storehouses of talent and they can achieve and are achieving their goals. They are capable of doing all the tasks we do; it is just that they have their own way of doing it. Their capabilities should not be undermined in any way. With the correct advice and guidance by mentors, even they can prove that they are more competent in comparison to some of the other students.

This world has lived to see many examples of great legends who despite being handicapped were a great gift to the mankind. For e.g. the father of modern science, Stephen Hawking. He is one of the greatest scientists the world has ever known. It is actually very astonishing for a man to be paralyzed and wheel-chair rider and being called a one of the greatest scientists of all times.

He even devised a machine to help himself out of his situation. But that device only eased his condition and allowed him to see better and hear in a more concentrated manner. The greatest Dancer, the inspiration of all times, Sudha Chandran is a living example of how one can overcome their disability. 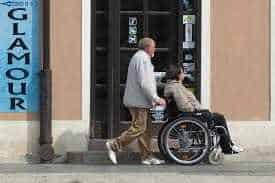 She was an avid dancer and loved dance with an ignited passion. But she met with an unfortunate accident early on in her life. When she was only 13, she had her leg amputated and instead got a Jaipur foot in its replacement. Before she got the Jaipur foot, she was told that she would never be able to walk, forget about dance.

But this lady was determined. She learned to dance on Jaipur foot bits by bits. It is so inspiring to see people like her do wonders in their life. Participants in the Paralympics for handicaps participate together to win the medal.

Even after being handicap, they take part in some very dangerous sports which even some common men fear to venture in. Such is their determination. Such is their will power.

I also remember a story about the world’s fastest typewriter. But the strange part is that he was blind by birth. He must be gifted with some unique senses to overcome the deficiency of another. But it is still very astonishing to know that he could type even faster then all the humans with eyes can do.

Handicapped people are a product of our own minds. That is, the word ‘handicapped’ has a lot of meanings but we fail to acknowledge some of them. A person might not be deformed and his thought process and beliefs might be defective. Society shares the psychologically handicapped without any questions. This is the problem in today’s society; it is more degrading than uplifting.

As a citizen and human, it is our duty to accept and love the handicapped. They should be provided with state of the art treatment. Government should also invent venues for them from where they can work and earn some money. We should try and make friendships with them.

After all they also need a shoulder to cry on and an ear to listen to all their problems. Only then you will know what a gem they are at heart and their inner beauty which has been scathed and scratched by the society because it is incapable of dealing with a pious heart.