Gymnastic is a type of exercise in which there is physical coordination of different body parts. This is mostly done on floors, bars, rings, pommel and vaulting horse. This can be also referred as acrobatics. They are very much similar. The gymnasts do this sport on various props.

They leap, turn, stand, handstand and flip on the various props. There are different forms of gymnastics. These may be artistic, rhythmic, trampoline, tumbling, acrobatics and even group ones. In artistic gymnastics the participants perform gymnastics and compete on rings and parallel or uneven bars.

While in rhythmic gymnastics perform on the floor but they use hoops, ropes, ribbons and many other properties. In the trampoline gymnastics, participants flip whenever they bounce on the trampoline.

If a person is asked anything about gymnastics they will answer usually the artistic and rhythmic gymnastics. There are separate gymnastics for both men and women. One can see variety of gymnastic events during Olympics which is organized once in every four years. Except Olympics there are other various Championships of gymnastics as well.

Gymnastics has gained a lot of popularity today. Except the adults we can see even children doing gymnastics these days. Gymnastics was first seen among the Greeks. After the Greeks this was seen among the Romans as well. Centuries when Olympics was prohibited and the Roman army was destroyed, gymnastics did not exist anymore. The Greeks introduced this sport in 5th century B.C. 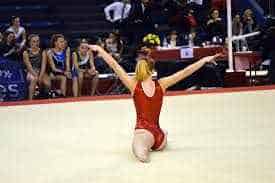 This was important for them because gymnastics improved their muscles and hands coordination. Slowly with the passing of time gymnastics became compulsory for the students in Greece. Gymnastics was into the light again in the sixteenth century.

There were various exercises for the men that time. This included gymnastics on bars, ladders, beams, vaulting and pommel horses. Even the US army followed these.

Thus, this sport became an event in the Summer Olympics in the year 1896. From then, it has always been a part of Olympics. Gymnastics has become a recognized sport in most of the colleges in the US. Students who perform gymnastics there get scholarships every year.

Today we can see many gymnasts evolving from different parts of the world. During the second half of 2000s, Japan and Soviet Union were at the top in artistic gymnastics among the men. Along with Japan there are other countries like US, China, Romania and Russia who are coming to the top in this form of gymnastics.

Change in gymnastics over the years

Of which the uneven bars are kept farther so that the moves are different and more complicated. When a person performs gymnastics on a balance beam, the different skills that he or she uses makes the routine more difficult. There have been changes in the manner in which a participant gets a point.

Earlier there was perfect score system which was changed later on. The gymnasts got points on the basis of their performance in front of the judges. If any participant makes a mistake or the performance was not clear, instant video replays are used by the judges.

Gymnastics looks very easy and eye appealing to watch. But it is very difficult and challenging. It requires a lot of hard work, practice and dedication for the sport. When children start watching gymnastics, some of them wish they would also become some famous gymnastics in the future.

But gymnastics is dangerous for the children due to various reasons. They may be subjected to under developed growth because of lot of training, dieting and stress. Girls who do gymnastics may attain puberty late compared to other girls. When someone trains to become a gymnast, their trainers ask them to lost weight so that they become more flexible and for easy routines. 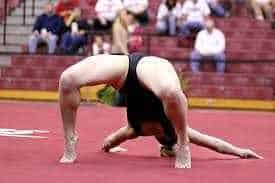 Especially girls have a problem for this because there are chances they may suffer from bulimia nervosa or anorexia nervosa. They are even asked to diet during training. This means they need to eat less. This can cause eating disorders which can affect our entire body system. They can have problems in the respiratory system, endocrine glands and cardiovascular system.

As gymnastics is a very challenging sport the players have to face a lot of injuries if they do need to train and practice properly. Sometimes these injuries can turn out to be serious ones as well. Many times, gymnasts have suffered from broken bones and sprains in some part of their body. If these broken bones are not treated and healed properly, it may affect the growth and shape of the person.

This can be painful for the person in his entire life. There are chances of other medical problems too.  Gymnastics requires a lot of time, hard work and practice. The person has to sacrifice his other personal time for gymnastics. As the person is busy with the practice, he or she may not have time for the family and friends.

They can suffer from isolation as well. Sometimes the trainers are very aggressive to their students during practice. This can affect the students’ behavior and mindset as well.

Due to all these dangers some of the parents do not allow their children to do gymnastics as it is very dangerous sport. Every sport can cause injuries to the player. This does not mean that one has to stop playing that sport. If this happens the field of sports will start to have very less members.

Many famous players of different sports have been injured while playing their particular game. But it did not stop them from playing. They continued playing the game when their health became proper. If someone plays any sport, they must give attention to the safety as well.

If they practice and perform properly, there will be reduction in the medical problems. Moreover, no trainer will force their student to train very hard when their health is not proper because later it can cause more serious problems. They take care of both their training and safety.

In order to become a perfectionist in any sport, one needs to maintain a healthy diet. So, no trainer will ask the student to eat less. If any person wants to do gymnastics they should go to a professional where they can get proper training and experience.

There are many dangers from gymnastics. But along with the dangers there are a few benefits too. People become flexible with gymnastics. Yes, there chances of injury but it can be reduced with more safety. Gymnastics helps a person to control their body well. This further helps them to maintain coordination during other times as well except during gymnastics.

This shows that gymnastics makes a person aware and helps to take any action during certain dangers. As the gymnasts maintain a healthy body and diet, they will be free from many diseases. Gymnastics include some weight activities too. This will make the gymnasts strong. Their bones will become strong at a very early age. This will prevent them from suffering from any bone problems in the later part of their life.

Gymnastics needs hard work, patience, practice and dedication. But along with that the people become confident and boosted about themselves. As a lot of exercises are needed for gymnastics, it makes up the exercises which other people do to remain fit.

The gymnasts have overall development of the body.  Gymnastics helps a person to maintain their upper and lower body and to gain main strength needed for the body to do various tasks. Every person makes a mistake when they learn something new.

They are corrected by their trainers, teachers or elders. This happens in gymnastics too. When any person does a mistake, the trainer corrects them. The student becomes disciplined when they try correcting the mistake seen by their trainer. Other than becoming disciplined, the gymnasts also learn to learn many social skills outside their training.