Good Friday is the day which is remembered as the day when the Son of God, Jesus was crucified. This day Jesus died on the cross sacrificing himself for our sins.

Good Friday and Holy Saturday is the only two days of the Holy Week of Lent when no mass is celebrated.

Lent refers to the forty days of sacrifice and prayer to the Son of God. Lent begins with Ash Wednesday and ends on Holy Saturday after which there is a celebration for the resurrection of Jesus Christ. According to the Bible, Jesus did not eat anything during the period of forty days.

He was in the desert preparing for his ministry and fought against Satan. During the season of Lent of the Holy Catholic Church, Christians fast and sacrifice.

They spend their time praying to God and follow what Jesus had done in that forty days. During the season of Lent, the altar in the church is not decorated with flowers and no Alleluia songs are sung in the Holy Mass. 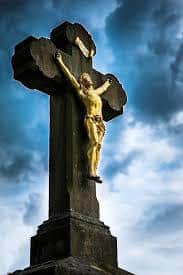 The history of Good Friday dates back to the 4th century. According to the Bible, Jesus used to preach in the temples and heal the people.

Jesus had twelve disciples but one of them named Judas betrayed him. Judas gave thirty pieces of silver to the guards of temple and got him arrested.

After this he was forced to go the house of the high priest’s father-in-law. He questioned Jesus but did not get proper answers.

Then, he was under the captive of the high priest, Caiaphas. Many people had gathered there. Some of them even gave testimonies against the Son of God.

All the high priests there ordered him to take a solemn oath. He agreed to the oath and said in front of them that yes he was the Son of God and soon they would see him seated at the right hand of the Almighty. His death sentence was made and even Peter denied to know him.

The next day Jesus was taken to Pontius Pilate, the Roman governor. He was charged for refusing to pay the taxes to Caesar and calling himself a king.

Later, Pilate came to know that Jesus belonged to Galilee. So, they shifted the case to King Herod, the ruler of Galilee. Jesus was questioned even by King Herod.

But there was no answer. Pilate then informed the crowd that neither he nor King Herod found Jesus guilty.

The crowded demanded to call Barabbas who was a prisoner. When the crowd was asked by the governor about their relation with Jesus, they demanded to crucify Jesus.

Pilate became afraid with the demand of the crowd. He called Jesus to his palace and asked him from where he is. After Pilate came to know the answer, he told the crowd that Jesus was not guilty.

He did not want any unrest to take place so handed Jesus to the crowd. Jesus was made to carry the cross till the place of execution, Golgotha.

He was helped by Simon to carry the cross. Jesus fell thrice till he reached Golgotha. He was hung on the cross, nailed and a crown of thorns was put on his head.

He was crucified there along with two criminals. Jesus was on the cross for six hours. After which Nicodemus, Jesus’ follower held his body and wrapped it. Then, he was put in the tomb.

This is what Good Friday is all about. Jesus rose on the third day which people celebrate as his resurrection day.

Why is it known as Good Friday?

From the history of Good Friday, it is seen that it was a sad moment for the Christians. Jesus was crucified on this day and he died for us. Then why is a sad day called Good Friday? The world is full of sins. Jesus sacrificed and died on the cross for us.

He was ready to bear all the wrong doings of his followers. He wanted his followers to celebrate his resurrection as a joyous day. He did not want his people to suffer anymore.

He won against the evil. It is because of Jesus’ sacrifice that people are forgiven from their sins and they receive peace.

How is Good Friday celebrated?

The day of Good Friday begins with fasting. No holy mass is celebrated in the church. Instead, the followers perform the Way of the Cross.

The Way of the Cross refers to the fourteen stations which show the journey of Jesus till his death. It begins when Jesus was sentenced to death and ends with the body of Jesus put in the tomb.

The images of the fourteen stations are present in every church. After the Way of the Cross, people sing hymns which are about the mourning and death of Jesus. On this day, the altar is left empty.

Silence is maintained in the church. A cross similar to the one when Jesus was crucified is placed in front of the altar. The people pray in front of this cross and kiss the cross.

The Holy Communion is given to the people but the one which was sanctified on Holy Thursday by the priests. This day is spent by praying and remembering the death of Jesus.

Good Friday is an important day for every Christian or for anyone who believes in Jesus Christ. On this day, looking at the Cross people try to understand what did Jesus sacrifice for his people.

They remember about his death and pray to be connected to God. They learn the importance of the death of Jesus. It is because of his sacrifice that all of us have a happy life.