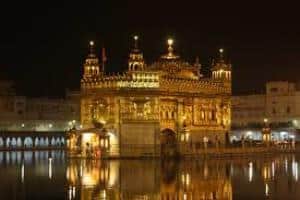 India is a land of temples; most of them hold religious importance and some of them are world famous too!! Our country is a big paradise for travelers, right from the fun seeking youngsters to the relaxation seeking elders.

Our society respects religious beliefs as part of our own existence and considers it an important part of one’s identity.

Cultural diversities across our country are reasons why we celebrate numerous festivals throughout the year and speak with each other in different languages.

Religious beliefs vary from one place to another and so is the cultural diversity too.

That’s why our nation holds the belief ‘Unity in Diversity’ always flying high. In our land of sacred places, one such magnificent temple holding high prominence since ancient times is the ‘Golden Temple’.

The temple is the most sacred place of the Sikh community and devotees from all over the country come and prays here at what they popularly call as “The house of God” with all their devotion and respect for the lord.

This pilgrimage center is located in the city of Amritsar, in the state of Punjab.

Down the History Lane

The golden temple, being the most sacred Gurudwara of the Sikhs, is named so because the entire temple is coated with gold covering, adding to its splendor and beauty.

In about 1577 AD, Guru Arjan Sahib conceived the idea of creating a central place of worship for the Sikh community and thus from there began the journey of bringing up the temple.

Guru Arjan Sahib was popularly known as the fifth Nanak and he was also responsible for planning the entire architecture of the temple by himself.

He also supervised the construction of the temple by himself along with co-operation from other prominent Sikh leaders of those times.

The entire temple was built by 1601 AD and pilgrims from any corner of the world were welcome at the sacred place without any distinction on the grounds of cast, creed, religion and other likely parameters.

The golden temple reflects the Sikh and Muslim architectural styles in good harmony. The temple is surrounded by a huge sacred lake, called the ‘Amrit Sarovar’ or the holy tank. The temple was built on a 67. Ft square platform in the centre of this holy tank.

The pathway or the bridge connecting the main shrine is about 60 meters long. The main temple is a three storied structure.

The lower areas of the shrine are beautifully floored in marble. Here lies a canopy, upon which the most sacred text of Sikhism, the ‘Guru Granth Sahib’ is placed in a decorative fashion completely studded in precious gems and jewels.

The second floor of the structure holds a unique pavilion ornamented with mirrors of various shapes and sizes, popularly called the ‘Sheesh Mahal’.

The third and the highest elevation of the structure consists of a golden dome, designed to have bloomed lotus motifs at the base together with inverted lotus at the top, supporting a ‘Kalash’ and terminating with a ‘Chhatri’.

Cultural Significance of the Shrine

At this popular shrine, the largest communal meal or ‘Langar’ is organized where around 35,000 people are provided with meals for free by the temple.

Service is the main motto of the temple and they truly practice and preach it by virtue of the services they render to society.

The shrine practices equality among all people and this is followed in its principles as well, when during a Langar, all diners are made to sit on the floor to consume their meals.

This principle is followed till date by the shrine and is preached irrespective of their education and status.

This is another main attraction of the shrine that draws devotees from every corner of the country to visit this enchanting place at least once in their life time.

Interesting Features of the Shrine

The temple has four entrances to the main shrine from the north, south, east and west. It is to symbolize that people from all walks of life, from whichever region they belong to, are always permitted inside the temple premises.

In the main shrine, one can find that the stairs do not lead upstairs, instead go downward to inspire and bring in a sense of humbleness and down-to-earth attitude among its devotees.

This is a special quality of the shrine that has attracted pilgrims from thousands of years to offer humble services at the feet of lord. Many volunteers can be found serving meals during the Langar as a thanksgiving to the Lord for his blessings.

The golden temple has many a tales to recall in history. The Sikh shrine was witness to ‘Operation Blue Star’ that was carried out on July 6, 1984.

The entire temple complex was taken into control by the Indian Army, under the orders passed by the ruling government of Mrs. Indira Gandhi, the then Prime Minister of India.

The army imposed curfew orders on the entire state while carrying out the operation at the temple premises.

This operation took an assaultive face and was condemned by many Sikh hardcore followers worldwide and criticisms and disagreements led to many resignations from top end officials from administrative positions of the Indian government, as an aftermath of the incident.

This pilgrimage shrine is open to visitors and pilgrims alike, 24 hours a day. The holy book of the Sikhs, the ‘Guru Granth Sahib’ is recited at almost 35 different places inside the shrine and each reading takes almost 48 hours at a stretch to complete.

The pool surrounding the temple is a man-made lake and pilgrims take a holy dip in it to symbolically cleanse and purify their souls before entering the temple premises.

The entire temple is covered with pure gold that was gifted by Maharaja Ranjit Singh, almost two centuries after its construction.

Cultural diversity, apart from equality and brotherhood are epitomes of this glorious place and opens its arms to people from all walks of life making them admire and fall deeper in love with this marvel.