Essay on Gold for Children & Students 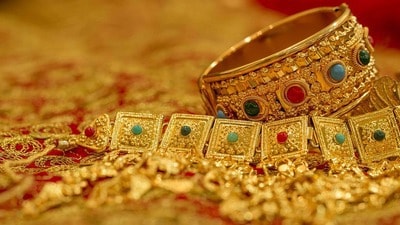 Gold can be referred to as the metal of wealth and prosperity. In India, Gold has financial as well as cultural or traditional value. Its cultural value is very high as in India, on every good occasion (festivals or special days), people tend to buy gold as a sign of prosperity and good fortune.

Gold is an element which is found naturally in the Earth’s crust and is mostly found in its free state. Free State of gold means its pure state which can be identified if the gold is present in its original dark shiny yellowish color.

Gold – An Element of Diverse Nature

Gold is known as “Aurum” in the Latin language and therefore, its symbol in the periodic table is “Au”. The atomic number of “Au” is 79 and its atomic weight is 196.96.

Gold is very soft but a heavy metal therefore, having the property of being ductile and malleable in nature. Gold is stable in nature and is known for its inertness, a property which describes that the element does not react with air, moisture or humidity at room temperature or slightly hotter temperature.

Also, gold can be molded into any shape and form as it is soft and ductile and malleable that means, it can be stretched into a thin wire or thin sheets. Hence, it is used as an ornament.

The purity of gold is measured in carats. Pure gold is expressed as a 24 carat gold. But this 24 carat gold is very soft and can be easily molded or reshaped. Therefore, this pure gold is not used in making gold jewelry.

But a lesser fine gold is used that is which has 75 % of gold quantity in it and the rest with some other binding metal is used. Usually 18 to 20 carat gold is used in making jewelry as it is hard enough for the gold to be used as an ornament and therefore, has longer life than the 24 carat gold.

In India, the value of gold is more cultural than scientific. The use of gold in almost all parts of the world is known to be for financial purposes. It is mostly used in commerce and business and therefore, it has a very high financial value.

Also, there are some rich people in India, who donate gold in temples or trust funds of the temple or just make a gold idol of the respective God, to praise them for their good fortune.

It is a part of superstition but still done on a huge scale by many rich as well as middle class people. Gold business is very huge business in India, as there is a huge demand for gold jewelries in India.

Gold is not only an element of ornamental value but also has a scientific value that is, it can be used as a reactant in many chemical and refining processes.

But due the higher financial value of gold, it is not much used in these industrial processes.

Gold Reserves all over the World

All over the world, the United States of America is considered to be the highest producer of gold that means the amount of gold retrieved from the earth’s crust in America is so far the highest as compared to the other countries.

The United States approximately consists of 75 % of the foreign reserves and almost 8,135 tonnes of gold is extracted from the Earth or produced there.

After the United States, the second nation to have high gold reserves is Germany. The estimated range of foreign reserves in Germany is 68.5 % and therefore, consists of 3,380 tonnes.

India is considered to be the largest consumer of Gold all over the world and is considered to be a very reliable reason behind the high global demand for gold. There are total 3 working gold mines in India which only contribute 0.5 % of the annual gold that is being consumed in the Indian market.

The three main gold mines are Hutti and Uti in Karnataka and the Hirabuddini mines in Jharkand. Therefore, this tells us that most of the gold in our country is imported.

As the above information tells us that the gold which we use in our jewelry is mostly imported and not produced in our own nation. But still the demand of gold never decreases. This is due to the fact that each and every Indian family follow the culture and traditions which include gold in it.

May it be a wedding ceremony or a naming ceremony or the 75th Anniversary of any occasion, no one will ever forget to buy at least 1 gram of gold coin.

This is how gold has gained its importance in the market and will continue to be at such a high position in the future as well.