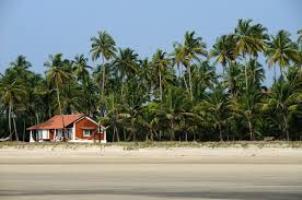 Summer holidays are exciting because we get to travel to new places and visit new places of interest. Since summer is at the peak during the summer months, we prefer to visit a cool place every year. Some of the places we have visited in the summer months till now include Darjeeling, Nainital, Ooty, Waynad, Kodaikanal, Matheran etc. All these places can be grouped under hill stations which seem to be relatively cooler compared to hot, dry regions.

This time, since my children were bored of visiting hill stations all this while, we thought they needed a change. So we prepared a list of places that could be visited. One such distinct place though was not ideal for the summers, was Goa.

We had never thought of visiting the place till my daughter came up with the idea of having fun in the beaches. It was a much needed relaxation time required for the whole family.

Goa, the land of beaches where young and old, mix very well, forgetting their age barriers and have fun in the sea. We packed our bags well in advance and left for the beautiful destination – Goa.

History of the Place

Their cultural traces could be found even to this day in the land of beaches. But the land was also conquered by Hindu rulers from many dynasties such as the Mauryan dynasty, the Chalukyas and also the likes of Kadambas.

The sea way made it a convenient route and passage for importing horses to the glorious Vijayanagar Empire of Hampi. Shipmen could be seen along the coast lines, waiting for ships to arrive so that they could off-load these horses from the ships and take them to the land of Hampi in Karnataka.

It was only towards the end of 15th century that Vasco Da Gama, a Portuguese discovered a route to India through Goa and his entry into India marked a big epic history of the Portuguese invaders, then the British into India.

It was a big legacy that they acquired after Vasco DA Gama made entry into the lands of Goa and made it the route to export spices to his country. The sea route became very popular among the Portuguese who came here and settled down. They did not stop at their commercial expansions.

They even went a step ahead and spread their religion from their lands. They began to preach and spread Christianity in Goa. They started speaking in Portuguese; as many as 400 churches can be found in Goa alone.

Portuguese cultures started spreading on the lands of Goa and people slowly drifted away from their native cultures and began accepting Portuguese culture as part of their lives. It was only in December 1961 that Jawaharlal Nehru, the then Prime Minister of India used his military powers to free Goa from the rule of the Portuguese and he was successful in this mission.

The land of Goa is today a multi-cultural place where people from different kinds of religions and practices stay in harmony over different cultural blends.

Goa – The Land Of Beaches

People from all over the country, following different cultures and speaking different religions reside at Goa. They could be vegetarians and non vegetarians as well. Konkani is the official language of the state. But due to the mix in cultures, the state proudly boasts of a multi lingual culture.

People speak Hindi, English, Marathi, Konkani, Urdu and Kannada in the state. There is also population, a small percentage which speaks Portuguese as well. The climate at Goa remains humid for most part of the year as it is very close to the sea.

It has very hot temperatures in May and may go beyond 37 degree Celsius on some particular days. Goa has a very beautiful landscape and it has so many beaches in store to be visited. Some of the popular ones are Calangute Beach, Anjuna Beach, Colava beach, Baga Beach etc.

Beaches offer lot of adventures for persons with an adventurous bent of mind. It is an ideal destination for honeymoon travelers as they can escape to the quite places together and spend lots of time in the sea, admiring nature.

The rising and relapsing waves of the sea offer a picturesque scene of nature at its best. The coconut trees lining the sea coasts at the beaches, the slowly passing streamers at far off distances and the mud arts by children offer every reason to visit the beautiful place.

The beaches remain cooler as the day passes and transcends into evening, drawing huge crowds into the sea. Children especially can be seen playing in the waters and building castles in the mud.

Parent supervision at beaches is a must. There are some beaches where restrictions apply regarding venturing into the sea and security guards can be found at all times, doting the beaches for security purposes.

Apart from beaches, Goa has other places of interest. It has many beautiful places ranging from waterfalls, forts, churches, temples and bird sanctuaries and national parks.

The nights spent at Casino pride is one to be remembered, many people board cruises to enjoy the night life at Goa and its very memorable and a must visit ride.

Street shopping is very famous in Goa. People also visit many important markets to get a glimpse of the shopping arena at Goa. Flea markets are arranges at many places during the weekends and Goa offers many things to shop for and is both a travelers and shoppers delight.

Most famous markets to visit for shopping include the Mapusa market, Anjuna market where flea markets are organized, Sunday night bazaars etc.

There are many famous personalities who are from Goa. Popular personalities like Wendell Rodericks, Manohar Parrikar, Remo Fernandez, Damodar Kosambi etc belong to Goa.

The time we spent at Goa is one to cherish. It takes our tensions away and gives us a reason to enjoy and celebrate Goa. The unending fun at beaches, the parasailing experiences, the walk up to the forts, the beautiful and scintillating waterfalls, offer a reason to be a good traveler.

The government is taking extensive steps to promote tourism with safety practices so that no traveler suffers in any way. The tourism department is also responsible to maintain the safety and cleanliness at beaches.

There have been many incidents involving security issues of foreign travelers, hence the government and the police squads work in close networks to monitor tourist places and offer utmost security practices.

India is a land where one can find temples, landscapes, hill stations, heritage sites, monuments, beaches, waterfalls, etc. almost every place has something or the other to offer to travelers.

Architectural heritage and glory of our nation dates back to ancient times and the government must take enough steps to conserve these places of interest. The national parks and bird sanctuaries must be conserved to maintain the beauty of nature.