People all over Maharashtra celebrate Ganesh Chaturthi with great pomp, devotion and rejoicing. I begin on the fourth day of the month of bhadrapad in August or September.

The celebrations last for eleven days, musical concerts, plays and other cultural programmes are arranges on a grand scale during these days. Indeed, the celebrations are colourful and joyful.

The public celebration of this festival was started by Lokmanya Tilak during the time of the freedom struggle. He used it as a means to unite the Indians against British rule.

Lord Ganesha or Ganpati is the elephant-headed God of wisdom and the son of Goddess Paravati and the God Shiva. He is worshipped whenever any work, programme or function is to be started.

The last day of the festival is the day of immersion. People take out processions carrying idols of the deity to the site of the immersion. On their way they sing repeatedly all together, “ Ganapati Bappa Morya, Pudhchya varshi lavkaryaa.”

“Oh, Lord Ganpati, we bid you farewell now, but do come back soon next year”.

The idols are then immersed in lakes, rivers or seas. Great crowds are seen on the streets of Mumbai and Pune on Anantchaturdashi Day.

Today, Ganesh Utsav is celebrated in other states of India, too, with a lot of joy and colour.

Every festival seems to be having some significant importance, as this festival have too. This festival was started to make unity among everyone, the primary reason was a plan against the British rule, suggested by Lokmanya Tilak.

As our relative’s leaves far away from us, the festival brings them back to meet us. This is a kind of get to gather.

Family, friends get to gather during the festival.

The Mythology of Ganesh 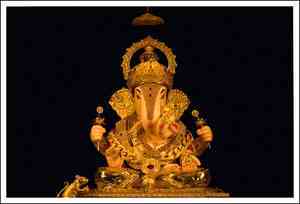 Ganesh is widely referred to as Ganapati or Vinayaka. This literally means “guardian of the multitudes”.

There are hymns of praise to this God in texts as ancient as the Rigveda in which Ganesh is mentioned as the averter of obstacles and also the lord of invocation.

He is invoked as an auspicious beginning to every assignment or enterprise, personal or professional.

Ganesha is known by 108 different names and is the Lord of arts and sciences and the provider of wisdom. He is honoured at the onset of rituals and ceremonies as he’s considered the God of beginnings.

There are two different stories about the birth of Ganesha. Legend goes that Goddess Parvati created him out of the dirt on her body and commanded him to stand guard while she took a bath. He was forbidden to allow anyone to enter.

Parvati’s consort Lord Shiva had gone out and when he tried to enter Ganesha refused to allow him as he was unaware of his identity.

A struggle ensued and Ganesha was slayed by Shiva. Parvati was enraged and to placate her Shiva promised that the child would live again.

When the gods under Shiva tried to search for the severed head, they could not find it and returned with an elephant’s head which Shiva then affixed to Ganesha’s body and breathed life into him again.

Shiva fixed the elephant’s head on the child and brought him back to life.

The other legend has it that Ganesha was created by Shiva and Parvati on request of the Devas or Gods to aid and assist them in their fight against the Rakshasas or Demons.

The Festival of Ganesha Chaturthi

Ganesh Chaturthi is a ten-day Hindu festival. It is celebrated to honour the birthday of the elephant-headed God, Ganesha.

There are four main rituals during the festival. The first of these is Pranapratishhtha or the process by which the deity is created as an idol of clay, ceramic or even papier-mache.

The next is Shhodashopachara which consists of sixteen ways of homage and obeisance to the lord.

The third is Uttarpuja in which the idol is shifted from its source to its destination where its worshippers congregate for its worship.

The rituals include singing, dancing, chanting of Vedic hymns and Hindu texts and fasting. Offerings from the daily prayers are distributed among the devotees.

These are usually sweets and a typical delicacy called “modak” which is a kind of wrapped dumpling made from rice or wheat flour, stuffed with grated coconut, jaggery, dried fruits and other condiments and steamed or fried.

The final ritual is that of immersion or Ganpati Visarjan whereby the idol is carried in an elaborate procession to be submerged in the river.

Socio-Political History of the Festival 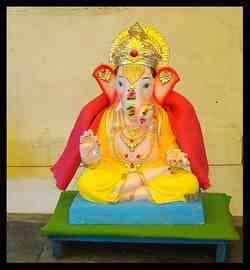 The advent of this festival in India is uncertain but it is fact that this festival was celebrated primarily by the founder of the Maratha empire, Chattrapati Shivaji.

However the first public idol was installed by Bhausaheb Laxman Javale.

The reason why the festival transformed from a private celebration to a mega public pageant and a gala national celebration was mainly due to the efforts of Bal Gangadhar Tilak in western India.

In India after 1870, the British Empire had become extremely fearful of anti-imperialist seditious assemblies.

They had passed ordinances that legally prohibited public assembly for social and political purposes of more than twenty people at a time.

However, under pressure from the Indian Muslim community, they exempted the religious assembly for Friday congregation in prayers across the mosques.

Tilak believed that since the religion of the Hindus did not mandate daily or weekly prayer gatherings would become weak and disunited by this ploy of the British.

Thus he attempted to make Ganesh Chaturthi a public festival trying to bridge the divide between the classes of society and also trying to circumvent the British colonial law on large public assembly.

He was the first to install large public images of Ganesha in pavilions in Mumbai.

In India, Ganesha Chaturthi is primarily celebrated in the states of  Madhya Pradesh, Maharashtra, Gujarat and  Goa ,Karnataka, Kerala, Andhra Pradesh, Telangana, Odisha and Tamil Nadu. The most significant of the celebration is in Lalbaug in Mumbai.

This festival has immense magnitude and scope of celebrations as it is a widespread and multi-hued international event.

In Europe, Ganesha Chaturthi is celebrated in the UK by British Hindu population. In  France, Ganesh Chaturthi remains the main Hindu religious festival.

The first Hindu Temple dedicated to Ganesh on Continental France opened in 1985 and the first procession took place in 1995.

Since then, every year, the La Chapelle Quarters of Paris witness the thronged and magnificent spectacle of an elaborate procession with thousands of devotees in the congregation.

The Philadelphia Ganesha Festival is one of the most popular celebrations of Ganesha Chaturthi in North America, and the festival is also celebrated in Canada, Mauritius, Malaysia and Singapore.

The Mauritius festival dates back to 1896 and the Mauritian government has declared it to be an annual public holiday.

In Malaysia and Singapore, the festival is more commonly known as Vinayagar Chaturthi because of the large Tamil-speaking Hindu population.

Ganesha is therefore a revered deity all across the world and serves to unite cultures and nationalities in a thread of universal harmony and celebration.