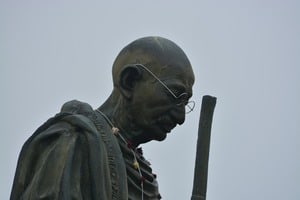 Very good morning to everyone present here. On this auspicious day today, I am going to speak on the topic of Gandhi Jayanti. It is a matter of great honor for me to have been chosen to deliver the speech in front of my esteemed teachers and my loving friends and classmates.

I humbly request your attention and beg your pardon for any mistakes that will be made if at all. Please feel free to correct me wherever I am wrong. I am open to suggestions.

Gandhi Jayanti is celebrated on 2nd of October every year in India in order to Mark and Honor the birth anniversary of the great freedom fighter and advocate of nonviolence, Mohandas Karamchand Gandhi popularly known as Mahatma Gandhi.

The day of Gandhi Jayanti in India is of extreme significance and in order to honor the great man’s birth date, all offices, schools and colleges are given a full holiday. It is also to be noted that, in the year 2007, the United Nations General Assembly passed resolutions which declared October 2nd to be celebrated as International Day of nonviolence, worldwide.

The day of Gandhi Jayanti is a day for us to pay respect and tribute to the great father of our nation whose tireless struggles are the main work forces behind the freedom and liberalization of our great Nation from the unjust and wrongful imposition of the British Colonial rule.

This day is a day of remembrance of the great deeds of the father of our nation who is lovingly called ‘Bapu’ because of his extreme popularity and an equally extreme simplicity.

The day of Gandhi Jayanti is usually a national holiday throughout India and all its union territories and States. Various government bodies as well as schools and such other organizations celebrate Gandhi Jayanti by prayer services in tributes all over India.

Various dignitaries and government servants including the president of India, the Prime Minister of India as well as the leaders of opposition and such other notable and influential people visit Gandhi Memorial in New Delhi where he was cremated.

Throughout the country social activist groups conduct pair ceremonies and meetings commemorating the life and works of their beloved ‘Bapu’. Painting competitions and essay writing competitions are conducted in most of the schools and local colleges and such other Institutions of Socio Political interest who give out prizes as well.

Students from all over the country take part in such competitions and in the Government sponsored competitions, the essay contest winners even get their essay published in journals and newspapers that are aided by the government.

Throughout the country speaker sets are set up in various Signals and points in junctions where Gandhi’s favourite bhajan, Raghupati Raghav Raja Ram song is played throughout the day. The statues of Mahatma Gandhi all over the country are presented with garland of flowers and various political and government officials pay their respects.

Mahatma Gandhi was a strict opposite of violence as well as reckless practices like drinking and as a result, October 2nd is declared as a dry day all over the nation. This means that sale and consumption of liquor is strictly prohibited through storefronts on that day.

However, it is unfortunate that the legal loopholes allow restaurants and bars in 5-star hotels to continue to freely serve alcohol without any hindrance even on the birth anniversary of this great individual that laid our country to its freedom.

Because Mahatma Gandhi was a vegetarian and believed in not hurting the animals, many people in India observe this day as a day of restrain and prevent themselves from indulging in the consumption of any kind of animal product as food.

Gandhi’s hometown, Gandhinagar celebrate this day with Gala and grandeur. Entire town seems to be rejoicing and honoring this great individual house mark on human history and particularly Indian history both politically and socially is unmatched.

Mahatma Gandhi will always be remembered not only for his struggles in the freedom movement but also because of his social stunts like the evolution of unequal treatment based on racial standards and nonviolence.

Gandhiji was a man of honor and was true to his word. I would like to end by quoting one of his famous sayings, “Be the change you wish to see in the world”. This means that we must always take the first initiative of what we want to do. We should practice what we preach and should not expect things from others which we won’t from ourselves.

The day of Gandhi Jayanti is an extremely important and significant day not only for the country of India but it is celebrated as a day of national importance for the entire Indian subcontinent and the neighboring States which shows in itself the magnanimity of the personality of our great father of the nation.