Whenever we think about a frog, we think about colorful little tail-less organisms which hop to move from one place to another. This is what makes it different from the rest of the animals.

It has very unique characteristics which make it different from other animals like fishes, dogs, tigers, etc. A frog is called as an amphibian as it can live on the land as well as in the water body. It is adaptable to both environments.

History of Evolution of Frog

Frogs are very common and can be seen mostly near any river bank or in an area having a water body. They are very old organisms i.e. they might have originated 256 million years ago. 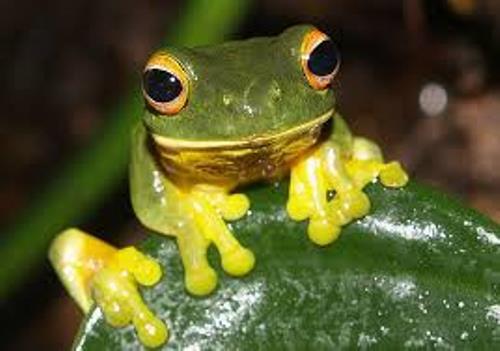 Frogs have evolved from fish and lead to evolution of reptiles. Hence, it has become a connecting link between the two classes.

It is estimated that frogs might have originated in the Triassic period (somewhere near to when dinosaurs existed).

Frogs can live on the land and its life on the land is considered to be very significant thus, differentiating it from the water animal i.e. the fish and its different species.

Frogs live a significant part of their life in the water body thus, making it different from other terrestrial animals like dogs, tiger, cats, etc. Hence, it is called as an amphibian.

The binomial nomenclature given by Linnaeus puts the species of frogs in the Kingdom: Animalia; Phylum: Chordata (animals having a proper vertebral column); Class: Amphibia and so on.

There are different genus and species amongst the different families which contribute to this large class of Amphibia.

How are Frogs different from other Animals?

Some distinguishing characteristic of a frog is that it does not have a tail and its body structure (Morphology) is totally different from that of the fish and a terrestrial animal due to its amphibian nature.

The frogs return to the water body to lay their eggs. The larvae (or offspring) of the frogs have gills similar to fish for breathing and when they grow into adults, they use their lungs to breathe.

Frogs can live in cold, humid as well as extreme hot regions also (except Antarctica). They have colored bodies and are in varying forms.

Frogs are cold-blooded animals unlike terrestrial animals i.e. their body temperature changes with the changes in the environmental temperature.

They have slimy skin which absorbs water and oxygen and sometimes, also produces a poison as a defense mechanism.

The Life Cycle of a Frog

The female frog lays the eggs in the water body and then these eggs are fertilized by the male frogs. These eggs then fertilize and form “frogspawn”.

The frogspawn is a cluster of many fertilized eggs and each egg has a gelatinous covering mainly to provide protection and nutrition.

The gelatinous cover closest/nearest to the egg is in a semi-liquid state and this provides a free environment to allow the developing embryo to move inside in it.

The embryo then fully develops to form tadpoles. They have a tail and gills similar to that of a fish which helps them to swim and breathe in the water.

Gills do the work of providing oxygen to the organism from water. The tadpoles survive on plants as a form of food i.e. they are herbivorous in nature.

At the end of their development, tadpoles undergo a sudden change in their body called Metamorphosis. This leads to growth of the tadpole into a full-grown frog.

The changes which take place during metamorphosis include formation of lungs from gills and conversion of a tailed body into a tail-less one.

The nervous system also develops along with formation of eyes and other glands present on the skin (poison secreting glands).

Is the Poison Secreted by the Frog Fatal?

There are some glands present on the skin of the frog which secrete poison mostly as defense mechanism. The main reason of the poisonous coating on the skin is to protect itself from other predators.

In some cases, frog poison is fatal to humans but in most of the cases’ presence of poison on the skin of the frog is just to protect itself from larger carnivorous animals.

The poisons produced by the frogs can be a mild toxin which might paralyze the predator giving the frog enough time to sneak away from under the predator’s nose.

Some fatal poison secreting frogs are poison dart frogs. Poison dart frogs are famous as their poison is used by the native people to coat their arrows. These arrows are then used for the purpose of hunting.

Yes, frogs are endangered. Since the past few years, certain species of frogs are on the verge of extinction and some are totally restricted to a particular region.

The reasons behind the decline of frogs are water pollution, environmental pollution, destruction of their habitat, ozone depletion, etc.

Ozone layer is well-known to protect the Earth’s atmosphere from the sun’s UV rays. But since the past few years, ozone layer is depleting due to increasing environmental pollution.

This depletion of the ozone layers allows the UV rays to enter the Earth’s atmosphere and reach its surface.

UV rays are very harmful for all the living organisms on the Earth and hence, exposure to these UV rays can harm the very sensitive frog species. This leads to their reduction in their native habitat.

Also, introduction of predatory fishes which prey on the frogs and also the increasing amount of diseases spreading amongst the different species of frogs has contributed to the decline in the population of frog species.

Are any Conservative Measures Implemented?

The frogs are now on the verge of being extinct due all the above discussed reasons. But all these reasons are not valid just for one place, in fact, this is a global scenario that frogs from all parts of the world are endangered and some of its species are already considered to be extinct.

Therefore, scientists have suggested certain conservative measures which majorly include improvement of the environment health, lesser use of chemicals, lesser use of non-biodegradable materials, to maintain a proper sewage system so that the industrial waste does not enter the rivers, seas and oceans without proper treatment.

All these steps will still be insufficient if the human population does not take proper initiative to save frogs as well as other endangered animals.