Thinking about a fox, all that comes to our mind is a very cunning and mean attitude.

In day to day life whatever is related to a fox is all in relation to the cunning, mean and selfish behavior of a person, but we hardly ever think about an actual fox.

This thinking about the fox behavior is all mythical and used in stories but an actual fox is rather a very small and beautiful looking animal.

What is a Fox?

A fox is a terrestrial animal mostly found in almost all parts of the world except for Antarctica.

These animals are omnivorous that is they can survive on both plants (herbivorous) and smaller animals (carnivorous) as a source of food. But they majorly survive on carnivorous food. 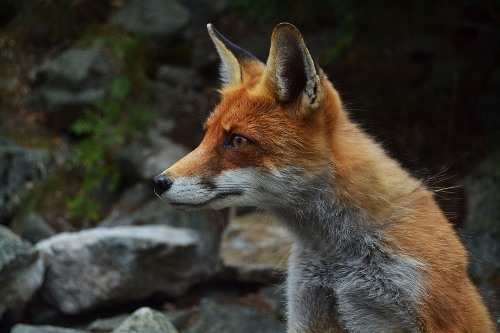 For example, red foxes are the most common type of fox species and are found in temperate region.

Then there are arctic foxes which are found specially in the arctic regions. These are white in color. There are several other types of fox species like the Gray fox, Island fox, Cape fox, Kit fox, etc.

Foxes belong to the Canidae genera that is they are related to the canine (dog) family. Dogs, wolves, etc. can be considered as their distinct relatives.

Foxes belong to the class Mammalia which means they are mammals in nature that is they give birth to their young ones (offspring) and not just lay eggs like some of the other animals.

This explains that the fox has a complex morphology as they are placed in the phylum Chordata and also, they are distant cousins of dogs and wolves (as they also belong to the Canidae genera).

Morphology of a Fox

Foxes are very small considering their body structure i.e. they are even smaller that a domestic dog. Inside the fox and its subspecies, there is a fox species called as fennec fox which is the smallest among all other foxes.

The physical characteristic of a fox changes according to their natural habitat and the climate of that particular region.  For example, the Fennec fox lives in the desert region and therefore, have large ears and short fur.

The reason for short fur is maintain the body temperature or to keep it cool in the hot desert. The color is generally orange or light brown. They are nocturnal in nature.

The arctic fox lives in very frigid conditions therefore, it has a smaller body, short ears, small limbs and very thick fur. This fur provides the required warmth to the fox living in such cold climate.

The red fox that is the most common species of the fox family are red in color. These foxes live in such a region where there are seasonal changes and hence, their physical characteristics also change seasonally.

For example, during the winter season, the fur of these foxes will grow long and thick to provide warmth and during the summer season, their fur will grow shorter and little thinner to allow the body temperature to be cooler comparatively.

Some other characteristics of a Fox

Foxes generally or always live in groups or packs or at least as a mated pair together with their young ones. Exceptions to this behavior are some arctic foxes that might be living a solitary life.

The eating habits or the appetite of the fox also changes from region to region depending upon the availability of the food supply and the kind of animals living in that region.

Red foxes for example, are typically omnivorous that is they depend on both plants as well as animals for their food.

Similarly, other foxes like the arctic fox, fennec fox, etc. will have a different appetite depending upon the availability of food as these foxes live in slightly isolated regions.

They make certain noises to attract the opposite gender. The gestation period for foxes is approximately 2 months.

Once the breeding cycle is over in February the young ones will be born in the month of March or April. The young ones of the foxes are called as kits, fox cubs, etc.

The new born fox cubs are deaf, blind with a shorter nose that itself means their sensory organs are not that developed.

They develop along with the growth of the other body parts.
The cubs need their mother’s body heat to survive for the first 4 weeks after their birth.

Within the next 3-4 weeks the fox cubs grow, and their body parts develop further. Their coats and the fur also grow longer depending upon the species.

Now, they can walk around a short distance, they learn the hunting skills to provide themselves. As they grow, their confidence also grows, they start wandering at a further distance from the home (den).

Yes, foxes are hunted in their native habitat where they are found in abundance. Foxes are not endangered yet but there has been a great decline in their numbers since the last decade.

Some of the foxes like the arctic foxes are hunted for their fur and flesh as they live in such a region where warmth is very necessary.

Their number has decreased drastically since the last decade. Therefore, it is necessary to start protecting them from now so that we won’t face a situation where there are only a handfuls of fox species is left.

It is basically to avoid the situation which is currently going on considering how other animals are getting extinct (for example, doves) or are on the verge of extinction (like the tigers).

Other factors which have adverse affect

As we all know foxes adapt to the environment depending upon the changes in the annual seasons. There is so much of environmental pollution and increasing global warming that this situation is a threat to the human population too.

This makes it very much obvious that this pollution crisis will also have a great impact on the foxes’ life cycle as well.

Foxes have their whole life and the life of their offspring dependent on the changing seasons and if the seasons don’t go properly due to this increasing pollution it affects them on an adverse level.

We all hear that almost all the animals are now on the verge of extinction and losing even one of these animals is a great loss.

This situation tells us that it is high time we ourselves start protecting our environment and therefore, help in protecting these animals.

We all know that in some way or the other, the increasing deforestation and industrial development are responsible for the increase in pollution.

Therefore, we are somewhat responsible for the pollution and also contributing to the increasing pollution.

Hence, active measures should be taken to make sure that these small and playful creatures do not get affected because of the increasing threat of pollution.