Flood is an overflow of water on land. It causes sometimes because of overflow of river water, it also causes due to heavy rainfall and overflow becomes out of limit.

During flood condition of people and animals becomes very critical. Always it is not necessary that because of heavy rainfall flood occurs; it can also be caused due to storm and tsunami in coastal areas.

All the heavy rainfalls flow to low land and rivers, and when the water over flows the river banks then that is called as flood. Sometimes it also causes due to melting of snow on mountains. And when it reaches to the surface it causes flood.

Mostly flooding occurs due to heavy rainfall, during this time natural water becomes the reason for flood and also on land if the capacity of water fills then the overflow of water takes place.

It is not necessary that flood is always caused due to heavy rainfall, there are other reasons as well for the cause of flood such as

Flood can cause devastating consequences to environment, people and economy. 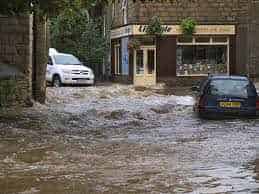 In the time of flood most of the roads, bridges, farms, and houses gets damaged. It affects the daily routine of travelling. Most of the automobiles get destroyed because of flood. People become homeless and finds new place for their survival.

For people it becomes very hectic to restart their schedule. Due to it transportation gets affected. It takes years to rebuild the new infrastructure damaged due to flood.

When flood occur environment also suffers a lot. Most of the chemicals those got damaged due to flood gets contaminated in water and pollutes water. Chemicals also contaminate in bodies and affect our body.

It destroys the natural balance of life and ecosystem.

Many people and animals get affected due flash flood. Many of the people get injured and many people become homeless. Disruption of water and electricity makes people suffer and struggle a lot. Flooding brings lots of disease and infections including pneumonia, fever and dysentery. It water snakes and insects causes a lot of havoc.

Sometimes flood comes all of a sudden. And the people who are not prepared for flood suffer a lot sometimes their belongings get flushed away and sometimes people become homeless. Floods destroy crops in the field and also cause epidemics. Many people loss their resources and tools. Often entire families get washed away in flood.

Humans are unable to stop the rain fall, but they can do something to get prevention from it.

To control and save extra water during floods in some area retaining walls are made like dams, lakes, ponds and reservoir so that they store water in it.

Before buildings are built it is necessary to check that ways of water are not blocked. Drainage systems should be kept free from objects that chock them. Drainage system should be covered to prevent insects and other animals from getting into the container.

Trees, grass help to protect the land from nutritious free. People use the method of vegetation to protect themselves of moving flood water.

During the time of flood the government of India adopts various methods to prevent the people from suffering. They provide short term and long term relief. Short term relief means immediate relief like food, cloth and medicines. Long terms mean free distribution of remission of rent.

If the water is stored then we can use them in various applications such as farming. Floodwater carries lots of nutrients and when they gets deposited in plants they becomes nutritious. And nutrient soil is perfect for cultivation of some kinds of crops. So better to get prevented then getting affected.